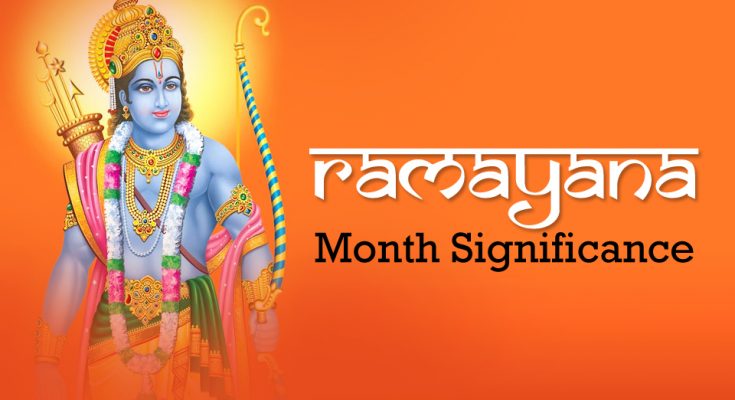 The Month Karkkidakam – the last month in the traditional Malayalam Calendar Kollavarsham or Kollam Era, is often referred as Ramayana Month. It is a period of great Astrological, Geographical, Social and Cultural significance for the people of Kerala who spend this time, observing various traditional practices. Reciting Ramayana at temples and homes is one of those observances in Karkkidakam which gives the name Ramayana Masam (Ramayana Month).

Karkkidakam starts in the middle of July and ends in the middle of August. The whole Kerala region experiences a period of bad weather, reduced crops, and various ailments during this time, which causes the people to consider the month as inauspicious. The Hindu community in Kerala desists from fixing or conducting marriages and other auspicious functions during Karkkidakam. The traditional practice of reciting Ramayana is meant for spiritual enrichment, which can help people feel less affected by the negativity of the period.

In Sanskrit the word Karkkidaka means cancer and it is the period when the Sun transits through Karka Raasi (Cancer Zodiac).  Karkkidaka Samkranti/Karka Sankranti which marks the transition of Sun into Karka Raasi also marks the end of Utharayana (northern transit of Sun) and the beginning of Dakshinayana (southern transit of Sun). Dakshinayana will last for the next 6 months till Makara Sankranti and the nights are longer during this period.

The month of Karkkidakam falls in the June-July period and is often marked by heavy rains. The South-West Monsoon will be in its full swing in Kerala which results in chilly weather, loss of crops, damages, diseases, and deaths. The agrarian community of Kerala suffers from retarded production in crops and the people have to rely on the grains stored in the previous seasons. The continuous rains and flooded farmlands make it difficult for the people to go out and do works. Also, torrential rain increases the spread of diseases. In order to resist the bad climate and diseases, people follow some special diets which improve their immunity.

For all these features, Karkkidakom is also referred to as Panja Masam (Month of scarcity) and is considered inauspicious for special occasions such as marriage, house warming, etc. Strong believers do not prefer this month to start any new ventures or conduct important functions. Land registrations and vehicle purchases will be less and the whole business will become dull. A general tendency can be seen among the people, to spend less and prepare for the heavy shopping and festivities in next month Chingam.

The tradition of reciting Ramayana during Karkkidakam is believed to be started in the 16th century. Adhyatma Ramayanam written by Thunjath Ramanujan Ezhuthachan is recited in the temples and homes during this period. The author Thunjath Ezhuthachan is called as the Father of Malayalam language, and his work Adhyatma Ramayanam is a lucid version of Ramayana which became popular among the Malayali community.

The purpose of reading the legend of Lord Ram is to attain a spiritual enrichment and to find comfort in the agonies inflicted by month Karikkidakom. A spiritual solace can be attained through regular and devoted reading of Ramayana during the 31 days of Karkkidakam. The story of Ram is not only significant for its spiritual element, but it preaches the right conduct and the duties of an individual towards the society, parents, siblings, husband, wife etc. A devoted reading of this epic can help purify the minds.

The person who recites Ramayana has to sit before a nilavilakku (lighted oil lamp) and read the verses in a particular rhythm. He has to start the reading from the first day of Karkkidakom and complete it on the last day of the month.

Karkkidaka Kanji
Bad weather and diseases are some of the salient features of the month Karkkidakam. In order to resist these adverse conditions and to improve the immunity, people stick onto some special diets during this month. Also, as agricultural activities come to a halt, farmers follow some Ayurvedic practices to rejuvenate their health. Karkkidaka Kanji is a porridge type preparation had by all people, including children during this month. It is a traditional Ayurvedic blend which has the power to purify the body and improve immunity.

Also, leafy vegetables like muringa (drumstick tree) leaves and spinach are not consumed in this period as they carry some poisonous elements at this time of the season.

Nalambalam Darsanam
Nalambalam Darsanam/Yatra is an annual pilgrimage held in this period to four famous temples in the central Kerala region. It involves offering prayers at Triprayar Sree Rama Temple, Irinjalakuda Koodalmanikyam Temple, Moozhikkulam Lakshmana Temple and Payammal Shathrughna Temple, which are dedicated to Lord Rama, Bharatha, Lakshmana and Shathrughna respectively. This practice originated centuries ago when completing this task in one day was an ardent task. Today, as these temples are well connected by roads, this pilgrimage is gaining more popularity.

Lakshmi Pooja/Sheepothi Orukkal
This includes a set of practices to welcome Lakshmi Devi – the Goddess of prosperity. On the last day of Mithunam (the month before Karkkidakam), people clean the interior and exterior of houses, destroy the damaged utensils, pots, brooms etc and  cleanse the house by sprinkling dung water. This practice is conducted to expel Chetta or Alakshmi or Ashree from the homes. After this, Lekshmiku Vaykkal or Sheepothi Orukkal is conducted by arranging auspicious things, including Ashtamangalyam and Dasapushpams in front of Nilavilakku. Also, some special poojas are conducted in the temples.

The cleaning of house and premises can improve sanitation and reduce the risks of diseases in the adverse period of Karkkidakom.

Illamnira or Puthiri
The traditional practice of Illamnira or Puthiri includes farmers taking reaped paddy sheaves to temples for Lakshmi Pooja and devotees collecting it from there.  After the pooja, it is distributed back to the farmers and other people visiting the temple. It is believed that keeping this paddy at home would bring wealth, happiness and prosperity.

Aanayoottu/Sukha Chikitsa for elephants
It is a part of the rejuvenation treatment given to the elephants in the month of Karkkidakam. Elephants form an important part of Kerala temple customs and traditions. Special massages, food, and Ayurvedic medicines are given to the elephants to rejuvenate their health. In Guruvayoor Sree Krishna Temple, Aanayoottu or feeding of elephants is a great event of tourist importance where more than 60 elephants are given special treatments, diets, and tonics.

In today’s world, as the modern lifestyle expels out the traditional practices, the recitation of Ramayana and the preparation of Karkkidaka Kanji is so rare at homes. Yet, Ramayana Parayanam or recitation of Ramayana is conducted in temples and some venues arranged by spiritual organisations. In media, Malayalam television channels telecast some authentic programs related to Ramayana or Karkkidakom in general. The recitation of Ramayana is now available in CDs & DVDs and some Ayurvedic product manufacturers sell ready-made Karkkidaka Kanji sachets. Also, there will be an increased sale of Thunchath Ezhuthachan’s Adhyatma Ramayanam issued by various publishers in Kerala.

One Comment on “Astrological Relevance and Rituals of Ramayana Month”