Feng Shui is the ancient Chinese technique of creating harmony with one’s surroundings or nature. It’s an art of arranging the surroundings and improving the positive influence of the Earth/Nature. The word Feng Shui literally means Wind & Water which are the two fundamental elements of life. Feng Shui deals with the energy or feel of a place that can be positive/good or negative/bad. The Chinese refer this energy as Chi and a positive Chi flow is essential for a happy and prosperous living. Negative Chi is inauspicious and the art of Feng Shui offers cures that improve the surrounding to bring a more positive flow of energy.
Feng Shui & Astrology
Every individual on Earth is being influenced by Astrology and Feng Shui forces. While Astrology deals with the positions of celestial bodies and their influence, Fend Shui deals with the benefic and malefic influences of Earth itself. For a person in inactive or stable condition, Feng Shui influence will be steady while the astrological influences keep on fluctuating. But when the person moves or travels, changes will occur on Feng Shui forces too. Hence there are some areas where these two sciences come together.
Feng Shui in architecture
Feng Shui is mainly applied in architecture; in the designing of houses, office space, factory and even cities. This traditional Chinese technique can greatly assist you in making your dream home a very favorable and healthy adobe. Feng Shui can guide you in choosing the appropriate land, in arranging the furniture and interiors and in setting up the garden, thereby assuring the surroundings to be in harmony with you. For analyzing the influences of heavenly bodies and Earth and to ascertain their balance, time and direction need to be known which are calculated using calendar and compass respectively.
When a home is being built or a family moves to a new house, certain factors need to be considered for ensuring the positive Feng Shui. These include locations of the living room, kitchen, bedroom, study room, dining room, bathroom etc. In order to identify the favourable directions and orientations, the Feng Shui consultant considers the client horoscope too. The Feng Shui for the whole household is planned according to the horoscope of the head of the family. The consultant makes calculations on the basis of the date of birth of the family head and uses the Lo P’an or grid plate instrument to establish the balance between astrological and Feng Shui forces. Thus he allocates the functions of each room.
The compass school of Feng Shui finds applications outside the stream of architecture too, which include finding the right direction for starting a journey and finding the favourable days and auspicious times.
Pa-Kua Number
This is very important in the calculation of Feng Shui and is evaluated for a person, using his Date of birth in the Lunar Calendar. Besides Feng Shui, the Kua Number is also used for determining compatibility between partners, spouses and children. The number varies for men and women as it rotates clockwise for men and anti-clockwise for women.
Kua Number Calculation
For Females:
-Add the last two digits of the year of birth and bring it to a single digit number.
-Add 5 to this single digit number if the person is born before the year 2000. For those born after 2000, add 6 to the single digit number.
-Bring the resulting number to single digit again, if needed.
-This is the Kua Number of the person!
Eg: Kua number calculation for a female born in 1998.
Adding the last two digits of the year : 9 + 8 = 17
Reducing it to a single digit number : 1 + 7 = 8
Adding 5 to the single digit number : 5 + 8 = 13
Reducing it to single digit : 1 + 3 = 4
So, the Kua number of a female born in 1998 is 4.
For Males:
-Add the last two digits of the year of birth and bring it to a single digit number.
-Deduct this single digit number from 10 for those born before 2000. For those born after 2000, deduct the single digit number from 9.
-This is the Kua Number of the person
N.B. For a male born in 2009 and 2018, the Kua Number will be 9.
Eg: Kua number calculation for a male born in 1965.
Adding the last two digits of the year : 6 + 5 = 11
Reducing it to a single digit number : 1 + 1 = 2
Deducting this single digit number from 10 : 10 – 2 = 8
So, the Kua number of a male born in 1965 is 8.
Lo Shu Grid
The Lo Shu Grid or Magic Square forms the basis of Chinese architectural planning. It contains nine squares each filled with a number from 1 to 9, symbolizing the natural order of the universe. The numbers of the square will add up to 15 irrespective of the way in which they are tallied. 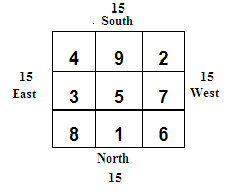 Finding the Lo Shu numbers is the next step after finding the Kua number and it helps to arrange or position the room or house to create a good Feng Shui. The interaction of numbers in the grid gives rise to auspicious or inauspicious energy which is very important to identify in Feng Shui practice. In this approach, each number from 1 to 9 is assigned with specific features or qualities as mentioned below.
Number 1
It is associated with  Communication. It relates how an individual reacts and communicates with others.
Number 2
It is associated with Sensitivity & Intuitive Power. It relates how sensitive and intuitive an individual is.
Number 3
It is associated with Planning & Imagination. It relates the intellectual capacity of an individual, memory and the ability to think clearly and logically.
Number 4
Associated with Discipline & Organisability. It signifies the individual’s neatness, practicality and hardworking nature too.
Number 5
Associated with Mental & Emotional Balance of the individual. It signifies the emotional stability and freedom too.
Number 6
It is associated with Home and Family. It suggests that the individual can be helpful to people and friends. But, these individuals are insecure for their home and family, particularly for their children.
Number 7
It relates to Sacrifice & Disappointments. These individuals learn from their losses or disappointments of four kinds – Love, Emotions, Health and Finance.
Number 8
Signifies Discipline & Organisability. It relates to the attention to detail.
Number 9
It is associated with Humanitarianism. It relates to the qualities of idealism, valour and ambition.
I-Ching
As per the Chinese Astrology, I Ching is based on 8 trigrams related to Lo Shu Magic Square. These Trigrams are made of a combination of broken and unbroken lines and each of them carries specific meanings. 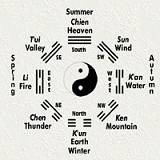 When two Trigrams are formed together (i.e. 6 lines) they create a Hexagram of specific meaning. Thus, there are 64  Hexagrams formed by the combinations of Trigrams. The way this science works is with 3 coins with a head as an unbroken line and tail as a broken line tossed 6 times and based on their formation one of the 64 Trigrams is formed.

The Trigrams symbolize and represent a Trinity of world principles, i.e. Subject (man), in the middle place, the Object having the form (Earth), which is in the lowest place and the Content (Heaven) in the top place.