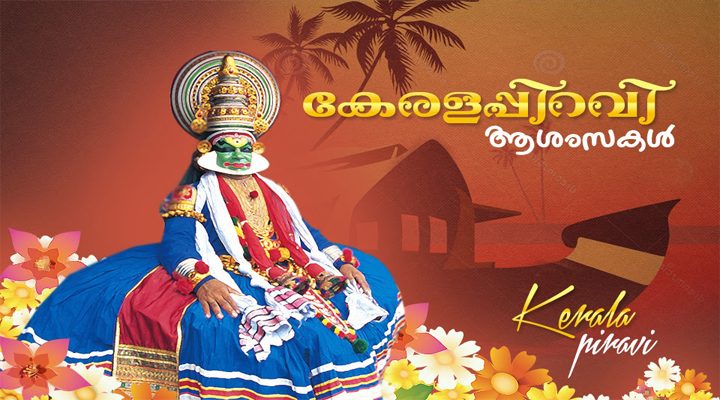 Kerala Piravi – The birthday of Kerala and Keralites celebrate this day on November 1. The state was formed on November 1, 1956, after India got independence from the British.

The name Kerala was formed from the term ‘Kera’ means coconut tree, and ‘Alam’ means land. Keralam- means, the Land of Coconut trees. In the beginning, Kerala consisted of three provinces, Travancore, Cochin, and Malabar.

It is believed that Kerala was formed by Parashurama, the 6th incarnation of Lord Mahavishnu. According to Hindu mythology, he threw his axe (parashu) across the sea northwards from Kanyakumari to carve a land and the place where the axe landed formed Kerala.

Kerala is a long narrow stretch of 560-km of land, with a width of just 120 km. On the one side, it has an Arabian sea, while on the other side it has mountain ranges. There are 44-rivers running through Kerala. It is also unique because the state is covered with dense tropical forests, beautiful beaches, backwaters, cliffs, and fertile plains.

According to Archaeologist, the first citizens of Kerala had a tint of Negrito. It is believed that these people were hunters, and still inhabit in the remote mountain ranges of Southern India. They were proficient in interpreting natural phenomena, and also possess good knowledge of herbal medicine.

Negrito was followed by Austric, the present-day Australian Aborigines. These people introduced farming. They cultivated rice and vegetables.

Then came the Dravidian, and they absorbed all the skills from the Negrito and Aborigines. They strongly believed in Mother Goddess.

Kerala is also known for its exotic spices and has attracted foreigners from across the world. As years passed by, Jewish started coming to the shore of Kerala for trade. Even Arabs followed the Jews to set up trading stations. The first church in India was established in Kerala in 52 AD, by Apostle of Christ, St. Thomas, who visited the Muziris at that time. After Jews, the Dutch came, and they were followed by the French, finally the British.

On Kerala piravi day, the spirit of Malayalam is dawned in the heart of every Malayalee. It is a proud moment since it is a commemoration of God’s own Country. Today the society in Kerala is a mix of people from different sects of Hinduism, Christianity, and Islam.

4 Comments on “Kerala Piravi – The Birth of Kerala”