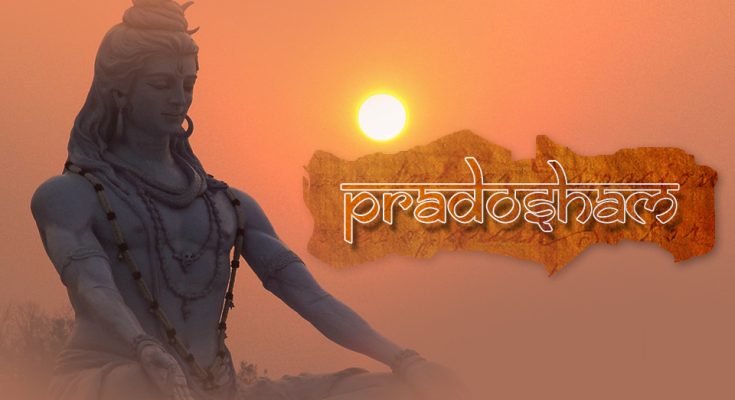 Pradosham/Pradosha is a specific time period of astrological importance occurring every day. This time period is believed to have the energy to remove our negative karma, and based on this energy level there are 3 levels of Pradosha. The name Pradosha coined from ‘Pra’ which means remover and ‘Dosha’ which means bad karma, possesses the inner meaning ‘remover of sins’.

According to Vedic Astrology every hour of a day is ruled by specific planets, causing specific vibrations in nature and human body. These vibrations can influence our mind and emotions which results in happiness or suffering. The gain, loss, joy, pain and mood changes which we experience is based on the level of frequency with which we connect to the planetary energies. By observing Pradosham rituals one can connect to the frequency of energy abundantly available for him.

The karma released during a Pradosham is dependent on its energy level, which varies with the days in a month. Depending on which day of the month it occurs, Pradosham is classified into three different levels.

All Pradoshams occur in the evening, between 1 to ½ hours before and right up to the moment of sunset. Thus, smaller energy level Pradoshams occur every evening at this time (between 1-1/2 hours before and right up to the sunset).
The middle energy level Pradoshams occur two days before Full Moon (Purnima) or New Moon (Amavasya) and takes place twice in a month. As per the Hindu lunar calendar, it falls on the 13th day of each lunar fortnight, happening in both Shukla Paksha (waxing phase) and Krishna Paksha (waning phase).
The larger energy level Pradosham is that when a 13th moon day befalls on Saturday. As per Vedic Astrology Sani (Saturn) is the Lord of Karma which delivers difficulties and teaches lessons that ultimately help a person to refine his character. Observing the auspicious Saturday Pradosham helps in the process of evolving our souls. Since Lord Siva is believed to have more influence on Sani, prayers are offered to the Lord on this day which can cause the planet loosen some karmic bonds.

Saturn or Sani is one of the most powerful planets whose influence can change the life/destiny of a person. The planet remains in a zodiac for a period of 2 ½ years and its influence on that zodiac or house will be very intense. Since Saturday is the day ruled by Sani, Saturday Pradosham (Sani Pradosh) becomes more auspicious. Observance of Saturday Pradosham, helps a person to remove his bad karma caused by the malefic effects of planets and bestows him with the grace of Lord Siva and Sani.

Lord Sani or Saneeshwara, one among the nine celestial Gods or Navagrahas, is believed to be the inflicter of troubles and ill effects. People use to observe fast on Saturdays to overcome the adversities inflicted by Sani and when a Pradosh falls on a Saturday it is considered more auspicious. With much more devotion, people observe vrat on Sani Pradosh and offers special prayers to Lord Siva.

Someshwara is one of the names of Lord Shiva, which means one who adores the Crescent Moon (the Soma). Somavara or Monday is the day ruled by Moon and is auspicious for Lord Shiva and Goddess Parvathi. It is believed that offering poojas on Monday Pradoshams helps a person to get the blessings of Lord Shiva and Goddess Parvathi, and to eliminate the malefic effects of Chandra Dosha (afflicted or debilitated Moon).

Also, on Saturday and Monday Pradoshams, people seek the blessing of Rudra – a  fierce form of Siva. It is believed that the grace of Rudra eliminates diseases, enemies and negativeness within a person and from outside elements.

Observing vrat or fasting is a major religious ritual to discipline one’s mind for better consciousness. Abstaining food for long hours before worshiping God is a way of liberation, by removing negative karma and attaining physical purification. Pradosham vrat or fasting is also meant to cleanse the body from negative vibrations and to attain control over our mind.
The Pradosham fast is observed from sunrise to sunset, which ends with the evening puja and worship of Lord Siva. The evening puja and prayers are conducted in the Pradosham time (1.5 hours before sunset and 1 hour after sunset). All these rituals help to remove negative thoughts and to inflict divine thoughts in mind.
Most of the devotees who observe Pradosham fast refrain from food and have only water, while some observe a partial fast, consuming fruits and water. Those who observe strict fasting would have only the Prasad after offering evening prayers and restart the usual diet from the next morning only. During the fasting time, devotees use to visit Siva temple too.

Pradosham fast is specially observed by women who long for children. According to Siva Purana, those who observe Pradhosham fast will be blessed with wealth, children, happiness and honor.

Each day of the week is believed to have different energy vibrations during the Pradosham time, as mentioned below.