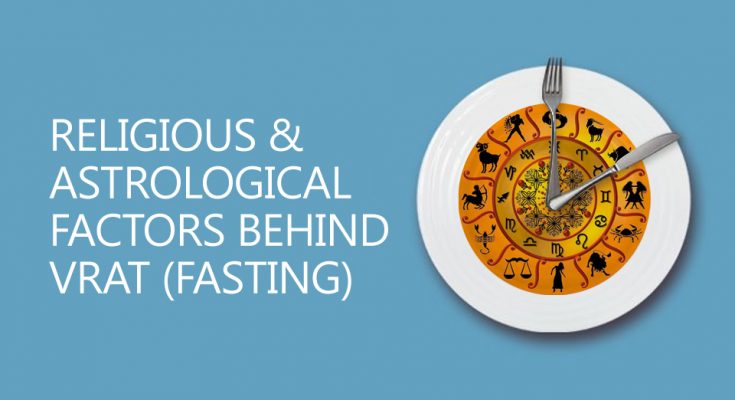 Types of Vrat – Reasons & Benefits
Vrata, also known as Vrat or Vratam, is a practice of austerity often observed as a religious rite. People observe Vrat as a religious votive rite and is mostly associated with astrological factors and festivals. It includes pious observances such as fasting, prayers or charity and strict regulations in speech, behaviour, food and drinks. The term Vrata is a Sanskrit etymology which means a vow, resolution or devotion. Sometimes, a Vrat would be practiced as a votive rite for the fulfilment of a desire or wish. One could observe Vrata for fulfilling something in his/her life or his/her dear one’s life. Strict fasting or regulations in food and drinks is inevitable in observing a Vrat/Vratam. It will be typically accompanied by prayers and poojas too.

Vrat in ancient scriptures
The term Vrat has its mentions in ancient Hindu scriptures – Vedas, Upanishads & Puranas. In Rigveda alone, the term has been mentioned at least 200 times. The contexts at which the term was used suggests that the meaning of the word was different from that of post-Vedic times.

As in the hymn 9.112.1 of Rigveda, a man’s vocation is called as his Vrat. Any work or profession to which the person is devoted is his Vrat. As in the hymn 1.93.8 of Rigveda, Vrat refers to an act of sacrifice. The Upanishads conceptualize Vrat as an ethical and behavioural discipline process. It classifies Vratas as Kayika (to purify mind), Vachika (to purify speech) and Manasa (to purify body). The Puranas relate the practice of Vrat to empowering the mind and the Dharmasastras mention it as a form of Prayascitta or the act of expiation.

Vrata – a personal practice
Vrata is a self-imposed restriction on food and behaviour. It’s a personal practice that doesn’t require the involvement of a priest or someone and is typically accompanied by prayers, charity or meditation. Though there are many cultural, religious and astrological factors recommending the practice of Vratas, it solely remains as a personal choice.

The reasons motivating the practice of Vrata are many. One may observe Vrata for empowering his mind, building up his morale, fulfilment of a wish or as an act of expiation. The wishes would be mostly related to some beloved one’s life such as quick recovery from an illness, good health and longevity, success and happiness, fertility, prevention of negativities or overcoming hardships. Some Vratas can be a result of a voluntary vow taken in the context of religious or spiritual practices. Also, some Vratas can be mandatory for the person who chooses to perform a specific religious or spiritual practice.

Cultural, Religious & Astrological Factors
A Vrata does not demand a public ceremony and is observed privately. It’s a kind of a personal sacrifice, following strict fasting and regulations in lifestyle. A typical Vrat involves a fast for a fixed period of time, usually a full day, where either no food or just one meal is eaten. There are regulations in the kind of food that can be eaten such as a fruits-only diet, a diet without cereals etc. The rules & regulations, the kind of observances and the duration of observances will be different for different Vratas.

Observing Vrat is customary in certain pilgrimages. Also, some Vrat are obligatory for those involved in the rituals of temple festivals and religious ceremonies. These are meant to mould the person’s mind and body and it may take some days to many weeks. Some Vrat are associated with major Hindu festivals such as Diwali, Sivaratri, Navaratri etc. The duration of the Vrata, the customs followed and the deity worshipped will be different for each of these occasions. One has to follow some astrological factors to decide the duration of these Vratas and its starting and ending timings.

Some of the commonly observed Vratas are solely based on astrology. There are Vratas observed on weekdays such as Ravivar/Njayarazhcha Vrat (observed on Sunday), Somvar/Thinkalazhcha Vrat (observed on Monday) etc. and those observed on specific lunar days such as Ekadashi, Pradosham etc. The reasons for observing, the rituals followed and the deities worshipped will be different for each of these Vratas. Observing Vratas on astrologically significant occasions are supposed to induce specific energy vibrations. Most of the Hindu festivals befall on such astrologically relevant occasions too.

Navaratri – The festival falls 5 times a year and that celebrated at the beginning of autumn or the onset of winter is the most popular one which is commonly known as Navaratri. It is celebrated from the Pratipada (first day) of the bright fortnight (Shukla paksha) of the lunar month of Ashvin. The festival lasts for 9 nights and some devotees keep fasting for 9 days.

Purnima Vrat – Observed on Purnima or Full Moon Day. The fasting starts at sunrise and ends with the glimpse of the moon. Fasting throughout the day without eating anything is said to be an ideal choice.

Amavasya Vrat – The new moon day or the no moon day in the Hindu Calendar is known as Amavasya or Amavasi. The devotees observe fasting on this day and give offerings to their dead ancestors.

Ekadashi Vrat – This is a significant Vrat largely observed by the Hindu Community. Ekadashi falls on the 11th day of every fortnight in the Hindu Lunar Calendar. A strict Vrat will be observed from the sunset on the day before Ekadashi until sunrise on the day after Ekadashi. So, the Vrat last for 48 hours in total.

Pradosh Vrat – This is observed to worship Lord Shiva and Parvati on Trayodashi (thirteenth day in Hindu Lunar month). A strict fast forbidding food and water will be observed from sunrise to sunset. The devotee can have a single meal after the sunset and evening prayers.

Significances of Vratas
All Vratas have some underlying scientific significances and deeper meanings. Vratas observed on astrologically significant occasions are supposed to induce positive energy vibrations. One who practices regular Vratas can mould the mind and body to endure the negative or unfavourable circumstances. It is recommended to help the body and mind to adapt to the changes. For those practicing Vrat for the goodwill of their beloved, it gives them a sense of contentment. They would feel that they have done their best for their dear ones and that the Almighty will take care of their beloved for the austerity they practiced.

Observance of Vrats is a way of strengthening the mind to win over the whims and temptations and adapting the body to survive in extremities. As per the Hindu scriptures, every living being has three defects – Mal (evil intentions), Vikshep (whims) and Avaran (negative covering). The regular practice of Vrats is meant to eliminate these defects. Temptations for adultery, forbidden food or drinks, stealing etc. are examples of evil intents. Through the regular and dedicated practice of Vrats, one would fight, control and eventually win over such evil thoughts. Performing Vratas with the intent of surrendering once intellect to the Almighty can prevent the whims and once the whims disappear and self-control is achieved, the negative covering will be eliminated.

In Today’s conditions, people manipulate and observe Vratas as per their comforts. One should find time to read the scriptures and earn the Vedic knowledge to understand the significances and right way of practising Vratas.