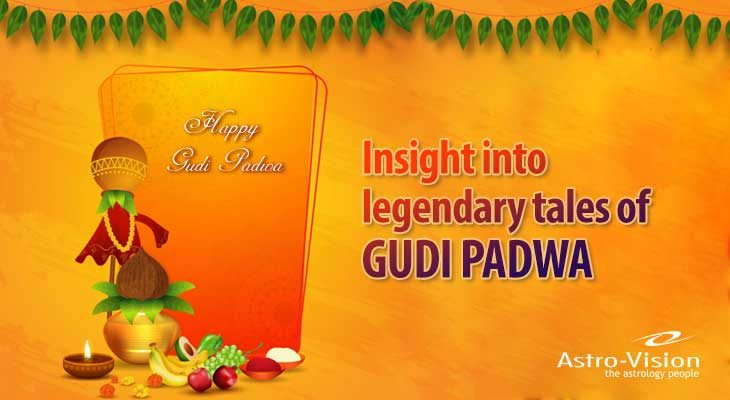 Padwa or Pratipada is the first day of every lunar month of the Hindu calendar and Chaitra is first amongst the twelve months of Hindu Shalivahana Shaka. The first day of Chaitra or the Chaitra Pratipada is called Gudi Padwa. The festival is celebrated all over the country with great joy and celebration.
Indians celebrate the festival of Gudi Padwa as the start of New Lunar Year.

People celebrate this festival in different styles and rituals in different parts of the country and some parts of the world too. It is called Ugadi in Karnataka, Samvatsar Padvo among Hindu Konkani people from Goa, the Sindhi community call it Cheti Chand as New Year and celebrate as the Emergence Day of Sindhi Saint Jhulelal. It’s also Ugadi in Karnataka, Andhra Pradesh and Telangana State and Navreh amongst Kashmiri Pandits. Among Bengalis, this occasion is celebrated as Naba Barsha, Assamese people celebrate it as Bihu, in Kerala it is celebrated as Vishu and in Tamil Nadu, the occasion is celebrated as Tamizh Puthaandu. It is considered to be the most auspicious day of the year. It is also called Sajibu Cheiraoba in the North-East state of Manipur. Particularly in Maharashtra, it is celebrated with great joy and happiness.

Rituals followed through the festival

Gudi Padwa is celebrated as the New Year Day for the Hindus in the Indian states of Andhra Pradesh, Telangana, and Karnataka. The day is observed by drawing colorful patterns on the floor called Kolamulu, doors are decorated with mango leaves tied in strings called Torana. All family members treat themselves with special scented bath, wear and gift new clothes, give charity to the poor, prepare and eat a delicious special traditional food called Pachadi and visit holy temples.

In Maharashtra and Konkani region, a new colorful cloth is tied on the top of bamboo- similar to that of a flag, with mango and neem garlands and flowers tied to it and a copper pot called Kalash put upside down on top of it and hoisted on the roofs, this is called The Gudi which symbolizes the victory sign. Hence, the day is called Gudi Padwa. Gudi Padwa or Chatra Pratipada has great importance in North India as well. The day is said to begin with a ritualistic oil bath, followed by prayers and the consumption of neem leaves. In North India, the nine-day festival of Chaitra Navaratri begins on the same day. Gudi Padwa is celebrated with people cleaning their houses and decorating it with rangolis. Both men and women wear new clothes to celebrate this auspicious day. On this auspicious festive day, courtyards of houses in villages will be swept clean and plastered with fresh cow-dung, decorated with rangoli at doorsteps. even in the cities, people dedicate their time to do some spring cleaning.

Gudi Padwa is predominantly celebrated in the state of Maharashtra. People observe this festival by making several traditional cuisines like Shrikhand, Poori, and Pooran Poli whereas a special dish called Pachadi is prepared in the southern Indian region.

One thing is notably common in all regions about this festive food, that it combines all flavors – sweet, sour, salty, bitter, astringent and spicy hot.

It is a beautiful symbolic reminder that one must expect all flavors of experiences in the coming New Year and make the most of them. The festival symbolizes the mix of bitter and sweet experiences in the journey of life filled with happiness and sorrows.

It is celebrated in and around Maharashtra on the first day of the month of Chaitra from the times of great warrior Chhatrapati Shivaji in commemoration of his victory over Mughals. It is not a festival that is being celebrated from the era of Shivaji. It started in prehistoric times and is said to be the date of the carnation of Lord Rama after his return from 14 years of exile in Ayodhya.

Astrological Significance of the day

As the sun gives light, the sensation gives birth to compassion and the flowers spread their fragrance. In the same way, may our new year be a pleasant one for you – every day, every moment.

Besides celebrating it as a festival, it is considered to be one of the most auspicious Muhurta amongst the 3.5 muhurtas to start new ventures, to buy new vehicles, etc. All Hindu Panchangas start from Gudi Padwa because of the vibrant festival that falls on Chaitra Shukla Pratipada, the first day of the bright fortnight of the Hindu lunar month of Chaitra.

According to the Vedic texts, it is considered to be the most powerful day of the year as Lord Brahma created the Universe on this very day and the Gudi is mentioned in the ancient scriptures as Brahma Dhwaja. Gudi Padwa 2020 falls on 25th March, around 15 days after Holi. There is no need to check any Shubh Muhurat on this day as the entire day is auspicious and lucky. Gudi Padwa – the Marathi New Year also marks the end of the winter crop season and the beginning of the summer harvest season. Farmers, especially in Maharashtra, plow their agricultural lands on this auspicious day of Gudi Padwa, the Marathi New Year, to ensure good harvest throughout the year.