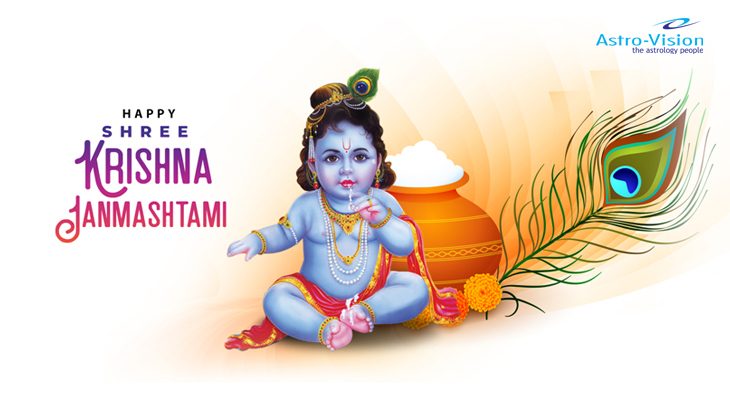 “The Birthday of Lord Krishna” or in other words “Krishna Janmashtami/Janmashtami/Gokulashtami” is celebrated in the month of July or August. This year, Krishna Janmashtami falls on 11th August, on Tuesday. According to mythological texts, it is celebrated on the Ashtami of Krishna Paksha or the 8th day of the dark fortnight in the month of Bhadrapad – the day he made his earthly appearance. And if this day coincides with the Rohini Nakshatra, then it is considered even luckier and that year, this day is also celebrated as Sri Krishna’s birth anniversary.

There is a popular saying in The Bhagavad Gita- “Whenever there will be a predominance of evil and decline of religion, I will reincarnate to kill the evil and to save the good.” The festival of Janmashtami encourages goodwill and to dissuade malice. The day is observed as a sacred occasion that celebrates togetherness and faith. The legend behind Krishna’s birth is as fascinating as the happenings during his lifetime. As per Hindu mythology, when negative forces unleashed mayhem over the world, Mother Earth approached Lord Brahma about bringing an end to the raging conditions. Lord Brahma presented this concern to Lord Vishnu, who in turn reassured him of his birth on earth to purge it from all rampant evils. As promised, Lord Vishnu took birth as Krishna at midnight on the 8th day (Ashtami) of the month of Shravan. Krishna, the eighth avatar of Lord Vishnu, was born in Mathura, to Devaki and Vasudev, in a prison. He was born at a time when evil forces were reigning supreme on earth. Krishna’s life was at risk from his uncle King Kansa. This was due to the proclaimed prophecy that King Kansa’s death would be caused by Krishna. Being aware of the dangers that lingered over the life of Krishna, his father, Vasudeva, immediately handed him over to Yashoda and Nanda in Gokul to keep him away from King Kansa. Krishna grew up in Gokul and finally came back to kill his uncle, King Kansa. This folklore is celebrated as the festival of Janmashtami by the devotees who keep a fast, sing devotional songs of Krishna, and visit Krishna temples. This happens to be one of the biggest religious festivals in India.

In Hindu mythology, the 8th incarnation of Vishnu, Sri Krishna, is the only one about whom we have vivid stories concerning every stage of his earthly life. As a child, he was quite naughty and his childhood was full of pranks and fun. Trying and stealing butter is what got him into most of the trouble. In his youth, he was the most romantic lover and wooed young gopikas (girls) with his flute. They were devoted to him but Radha was his greatest devotee. A compassionate king, he cared for the poor. He was a loyal and trusted friend. He was skilled in war and counseled his friend, Arjuna, on how one can seek union with God, on the battlefield of Kurukshetra. Freeing River Yamuna from the poisonous Kaliya Nag, rescuing his parents from Kansa, picking up the Govardhan hill to shelter the villagers from the wrath of King Indra are a few of the many captivating stories of Krishna.

The actual celebration of Janmashtami takes place from midnight as Sri Krishna is believed to be born on a dark, stormy and windy night. All over India, this day is celebrated with great devotion, warmth, and grandeur.

The Krishna temples are beautifully decked up with lights and flowers which is a mesmerizing vision at night. People wear new clothes and visit temples to pay respect and perform pujas for their beloved God. The priests in temples sing hymns and chant mantras. Some temples in India also perform the reading of The Bhagavad Gita. The beautiful fragrance of the flowers, soothing scent of the camphor burning, and the sound of the ringing bells in the temples captures the entire atmosphere with sanctity.

Celebrations in Mathura and Vrindavan

The Janmashtami celebration at Mathura and Vrindavan, the places where Sri Krishna had spent most of his life, are very special. On this day temples, homes and common places are wonderfully decorated and illuminated. Night long prayers or jagrans are held and religious mantras are sung in the temples. Children dress up as different characters from mythological stories and dance or act out instances from Krishna’s life.

Celebrations in Maharashtra and Gujarat

Janmashtami is mostly celebrated in Pune and Mumbai in Maharashtra, and in Dwarka in Gujarat on a large scale witnessing immense participation from the people. People in large numbers participate in the Dahi Handi festival which is celebrated to mimic the stealing of butter by Krishna. An earthen pot consisting of butter, ghee (milk fat), dry fruits and milk is hung at a height of 20-40 feet with the help of a rope. Spirited energetic men make a human pyramid and climb on each other to reach the pot and break it. Later Dahikala (ingredients in the pot) is distributed among the devotees. Dahi Handi celebration encourages working in a team, thus signifies the importance of teamworkWith time, the butter was replaced with money, in some places. The prize money is given to the winning team who manages to break the handi.

Devotees prepare large kolams, a rangoli made with rice flour, on the floor and make prints of the foot of Baby Krishna on their home entrances. This depicts the welcoming of Lord Krishna in their homes.

People keep fast for the whole day on Krishna Janmashtami. After taking a bath, they clean the temple and decorate it around the idol of Laddu Gopal (baby Krishna). The puja for Krishna Janmashtami starts at 12 A.M, this being the birth time of Lord Krishna. During this auspicious puja, an idol of Krishna is placed in the cradle and bathed with panchamrit which is made from ghee, milk, curd, honey, and sugar. This panchamrit is then distributed among the devotees as prasad. Devotees joyously swing the cradle and welcome the blessings of Krishna in their lives. The chanting of the aartis, mantras, blowing of the Conch, hymns, kirtans becomes a common scenario everywhere where the celebrations are going on.

Sri Krishna Janmashtami is one such festival that observes a large assemblage of people from all walks of life, who lose themselves in the euphoria of the festival, Krishna being one of the most forceful human incarnations of Lord Vishnu. Ever since he took birth on earth in human form, he is worshipped by the people as a god-child, an adorable prankster, a charming lover, a spiritual guide, and the principal power. What most captures our attention is the talk that takes place between Krishna and Arjuna during the Dharma Yudha or the righteous war between the Pandavas and Kauravas when Arjuna goes into an emotional turmoil over killing his own cousins and family. The talk on Dharma (righteous path), Karma (deeds), salvation, knowledge, etc gave way to the world’s greatest scripture and life guide – The Bhagavad Gita. The Gita does not teach world renunciation but instead encourages world acceptance. The incarnation of Lord Krishna signifies the end of all darkness and the eradication of the evil from the earth and restoring Dharma in its place.

Previous: The Significance of Varalakshmi Vratam 2019