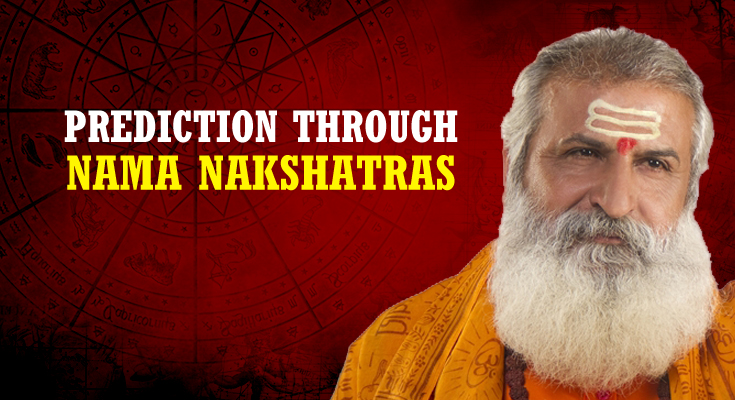 The Zodiac is divided into 12 Rasis or signs of 30° each. These Rasis play a significant role in analyzing the life cycle of a native. Another division of the Zodiac is the Nakshatra division in which the 27 Nakshatras are assigned to the 12 signs at 2% Nakshatra for each sign. The Nakshatras are further divided into 4 Padas or quarters each so that there are 108 Nakshatra Padas spread over the Zodiac whereby each sign of the Zodiac gets 9 Padas of Nakshatras. The Nakshatra Pada occupied by Moon at the time of birth of a native is used to determine the Dasa-Bhukti of the native, which is a very important tool in the analysis of the birth-chart. Specific syllables have been assigned to each of the Nakshatra-Padas which are used to name a native since times immemorial. The starting syllable of the name indicates the Janma-Nakshatra-Pada of the native and is called the Nama-Nakshatra which also indicates the position of the Moon at birth. Astrologers of yesteryears would use this technique of Nama-Nakshatra to predict the whole life cycle of a native. The name by which a native is known in his present birth provides many hidden clues to the basic nature of his personality.

More about the lords of rashi (zodiac signs)

An attempt has been made here to explain the names of the Dasavataras or the ten Avatars or Incarnations of Lord Vishnu in relation to their Nama-Nakshatras and thereby explain the importance and purpose of manifestation of each Avatara along with a few hints on other applications of the Nama-Nakshatras. Some acquaintance with Hindu scriptural lore is needed to understand what follows.

Table I shows the syllable assigned to each of the Nakshatra Padas for ready reference. 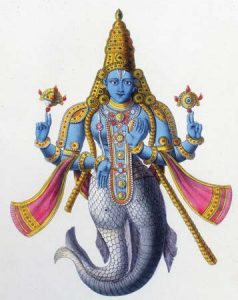 Matsya Avatara (Fish): The syllable ‘ma’ corresponds to the first Pada of Makha Nakshatra which is in Leo sign, the 5th house of the Zodiac. The placement of Makha -1 will be in Aries sign in Navamsa (D9) which is the first house of the Zodiac. When we consider the Navamsa position from that of the Rasi position, it will be 9 houses away. The 9th house is the Mantra Bhagyastana or Putra Bhagyastana as it is the 9th house from the 5th. Aries being the first house signifies new beginnings which are therefore the first Avatar (Incarnation). Once the Vedas were retrieved from the demons and brought back through Matsya-Avatara, Brahma is said to have learned them from his Father Lord Vishnu.

Purpose of Avatara: To bring back the Vedas from the demons Madhu and Kaitabha.

Koorma Avatara (Tortoise): The alphabet ‘Ku’ corresponds to Aridra Nakshatra – 1 Pada which falls in the sign, Gemini, the 3rd house of the Zodiac. The Navamsa position of this Nakshatra is Sagittarius, the 9th house of the Zodiac which is the 7th from Gemini. The 7th house signifies opposition. When the war ensued between Dharma (devas) and Kama (Danavas and Rakshasas), the Lord had to take the shape of a tortoise so that the Mandara Parvata (Mount Meru) could be placed on its back and the churning could continue. The 3rd house is the Kama Trikona and the 9th house is the Dharma Trikona.

Purpose of Avatara: To support the Mandara Parvata or Mountain from sinking so that the process of the churning of the ocean continued until Amritha (Nectar) came out of it. Varaha Avatara (Wild Boar): The alphabet ‘Va’ corresponds to Rohini Nakshatra – 2 Pada which is positioned in the 2nd house of the Zodiac, Taurus. This particular position is a Vargottama position; hence even in the Navamsa chart, the position will be the same. The 2nd house denotes mouth, teeth etc. In this manifestation, the Lord brought back Mother Earth from the ocean with the help of his mouth and teeth – tusk. Rohini-2 Pada is a Pushkara Navamsa and the result can be seen from the fact that the boar, an ordinary animal, was transformed into a Divine form.

Purpose of Avatara: To bring back Earth from the clutches of the demon Hiranyaksha who had hidden Mother Earth in the depths of the ocean. Purpose of Avatara: To kill demon Hiranyakshipu and save Prahlada. 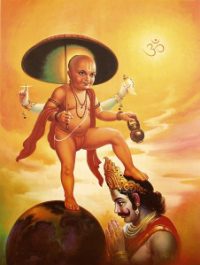 Vamana Avatar (Dwarf): The syllable ‘Va’ corresponds to Rohini Nakshatra – 2 Pada which falls in Taurus, the 2nd sign of the Zodiac. In the Navamsa also, it falls in the same sign thereby becoming Vargottama and is also a Pushkara Navamsa which resulted in the Avatara transforming from a small boy to Trivikrama who strode the entire universe in two steps and placed the third step on Emperor Bali’s head to push him down to Patala Loka or the nether world.

Purpose of Avatara: To keep Bali away from Indra’s position. 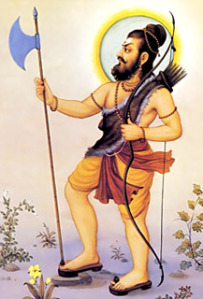 Parashurama Avatara (Axe as a Weapon):
The syllable ‘Pa’ corresponds to Uttaraphalguni Nakshatra – 3 Pada which falls in Virgo, the 6th house of the Zodiac. In Navamsa, it falls in Aquarius, the 11th sign of the Zodiac. Kshatriyas are denoted by the Sun and the position of the Nakshatra (sign) is the 12th from the debilitation sign of the Sun. In Navamsa, the position is the 8th from the 4th which is the house of the longevity of mother. Parashurama’s mother’s name was Renuka Devi. The syllable corresponds to Swati Nakshatra – 2 Pada which falls in Libra sign. Virgo is the 12th sign from Libra which shows the end of the mother. From the Navamsa position of the syllable ‘pa’ i.e., Aquarius, the 4th position is Taurus which is the exaltation point of the Moon. Parashurama’s father was Sage Jamadagni and the syllable ‘Ja’ corresponds to Uttarashada – 3 Pada which falls in Capricorn. From Capricorn, Virgo becomes the Bhagyastana for father. With a boon from his father, Parashurama brought his mother back to life. These two points can be easily correlated to the destruction of the Kshatriyas and beheading of the mother as per the instructions of his father.

Purpose of Avatara: To get rid of the Neecha Kshatriya clan.

Rama Avatara (Dharma Personified): The syllable ‘Ra’ corresponds to Chitta Nakshatra – 3 Pada and falls in Libra, the 7th house of the Zodiac. In Navamsa, it is Vargottama. The 7th house is the 11th house from the 9th house or Dharma Labhastana. Lord Rama’s life was an exemplary one in the path of Dharma.

Purpose of Avatara: To destroy Adharmic principles including Ravana (Dustanigraha). Krishna Avatar (Universal Preceptor — Jagadguru): In the word Krishna, the syllable used to determine the Nama Nakshatra is ‘Ru’ which falls in Libra sign, the 7th sign of the Zodiac corresponding to Swati Nakshatra – 1 Pada. In the Navamsa, it falls in Sagittarius sign which is the 9th sign of the Zodiac and stands for Dharma. Bhagavan Krishna was on the side of Dharma and gave the Srimad Bhagavad Gita to the world.

Purpose of Avatara: Bhagavad Gita — The Doctrine of Life.

Purpose of Avatara: To teach the path to Liberation. 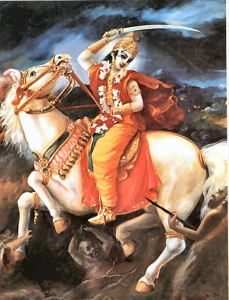 Kalki Avatara (Destroying Evil): The syllable ‘Ka’ corresponds to Mrigasira Nakshatra – 3 Pada which falls in Gemini sign, the 3rd sign of the Zodiac. In Navamsa, it goes to Libra sign, the 7th sign of the Zodiac, which is the debilitation sign of the Sun, the natural Atmakaraka. From the sign position, the Navamsa position is the 5th and from the Navamsa position, the sign is the 9th sign. This can be understood as the Avatara descending for the restoration of Dharma by destroying all that is Adharmic (evil) in the world. When people become more materialistic and the pursuit of desire is the only goal in their lives, Lord Kalki is said to arrive and destroy them.

Purpose of Avatara: To destroy all evil souls.

It is seen, the purpose of the descent of the respective Avataras has a perfect correlation to their sign and Navamsa positions and the first syllables of their names based on Nama Nakshatras.

General Application:
The name of an individual can indicate the path of life one traverses and the purpose which is dear to him.

Rasi position as also the exaltation house of Sani or Saturn which denotes hard work and research.

The Nama Nakshatras can also be used for many other purposes like understanding the origin of Karakattwas (significations) of planets and substantiating the relevance and importance of Yogi and Avayogi planets in a charts.