In India reservations (quota) in jobs and higher education for people belonging to the underprivileged sections of society viz., Scheduled Castes (15%) and Scheduled Tribes (22.5%) have been in force for decades. In 1990, a 27% quota for Other Backward Classes (OBC) was introduced, as recommended by the Mandal Commission. This takes a reservation to 49.5 %. In the past, the Supreme Court set the limit of quota at 50%. However, recently the Union Government introduced a Bill in Parliament for providing for a 10% quota for the “economically backward” people of the so-called upper castes. This takes the total quota beyond 50 % and hence the Bill was presented as a Constitution Amendment Bill requiring the support of at least two-third members in Lok Sabha as well as the Rajya Sabha. The Bill was presented in the Lok Sabha on January 8, 2019, and passed with overwhelming support. The next day it was passed in the Rajya Sabha too. With the President’s assent, the Bill has now become law.

*The Longitude based Arudha is computed in the same manner as the sign-based, except that the exact distance between the house cusp and its lord is considered. Jagannath Hora software gives such Arudha at the click of the mouse.

To learn more about astrological houses 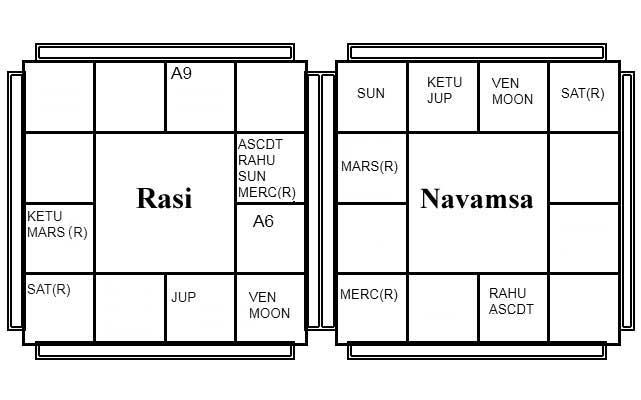 Gujarat has become the first state to announce its implementation. Does India’s chart show this?

In India’s social hierarchy, certain castes are perceived to be superior/senior and referred to as upper castes. So the Sun can be taken to represent the upper caste people. The 6th house represents, inter alia, service i.e. jobs. The Arudha of any house shows the perception of that house. We can also take any planet as a reference and consider the Arudha of any other house. So, taking the Sun as the reference point, the 10% quota in jobs (for upper caste) is shown by the Arudha of the 6th house and that in higher education, by the Arudha of the 9th house. The Arudha A6 (Sun) is seen to be Leol4° 6′ owned by the Sun himself while A9 00 (Sun) is seen to be Taurusl4° 6′. A6 (Sun) happens to be very close to the auspicious Bhrigu Bindu at Leol3°44′. The AlO(Sun) is seen to be Virgo 13° 8′. The Bill for the quota is shown by A3 (Sun) viz. Taurus8° 54′.

The Patyayani Dasa on January 9, 2019, was Ascendant – Saturn – Mars and on January 10, it was Venus – Venus – Moon. The Ascendant contains the Sun, the owner of A6 (Sun), Saturn occupies the 6th, Mars is in a Kendra while the Ascendant lord Moon and Venus are conjunct in the 3rd house. Venus is also the disposition of A3 (Sun) and A9 (Sun) —both in the 11th house. The Narayana Dasa on January 8 was Taurus – Scorpio-Aquarius and on the next day, it was Taurus-Libra-Taurus. Taurus containing A3 (Sun) viz the Bill, was ruling during the voting periods on both days when the Bill was passed by the two Houses. Muntha lord cum 10th lord Mars (Parliament) is in trine with A3, A9, their disposition Venus and A10 and aspects the Sun and A6.

With the Parliament passing the Constitution Amendment Bill providing for a 10% quota for the ‘economically backward ‘outside other quotas, a Pandora’s box of new quota demands is likely to be opened. This is because the government’s move will see the 50% cap (already high) set by the Supreme Court being breached.