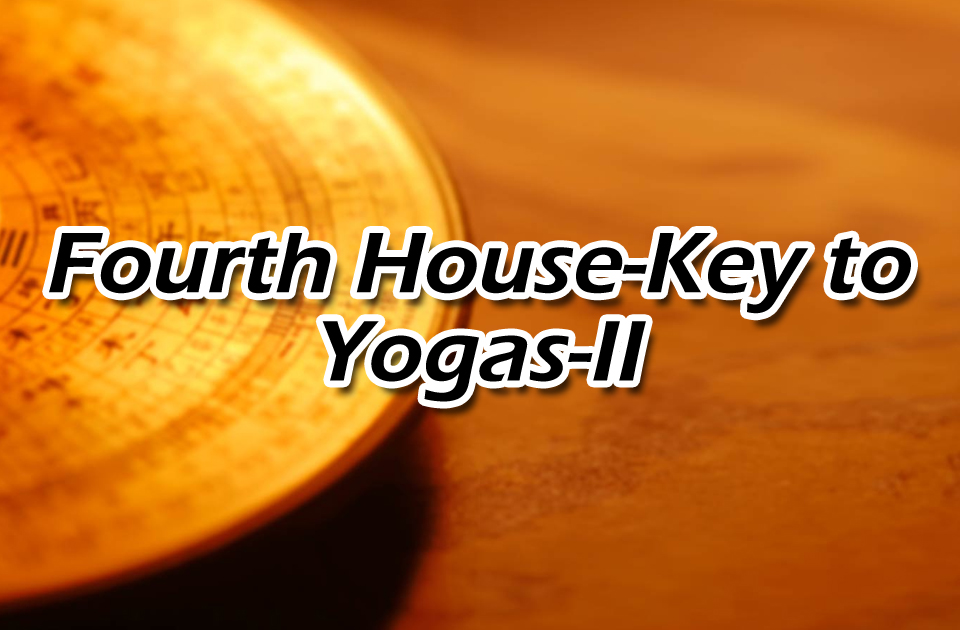 Planets and Combinations
Various planets and combinations affect the 4th house and the consequent results as follows
a)The Sun is the embodiment of energy and the source of life as the Atmakaraka but in the 4th, unless the sign happens to be Leo or Aries, can be extremely devastating as in common parlance it would burn the house itself.
b)The Moon if exalted or in Cancer would certainly give the best results of all that the 4th stands for, especially political or public popularity. In other signs including Scorpio, the Moon in the 4th as a benefic will not harm the house no matter whether he enhances the results or not. Often it is experienced that the Moon acts positively in the 4th house.
c)Mercury as a benefic fortifies the 4th house in respect of the sign he occupies. It makes the native choose a calling associated with journalism, info-tech, literary pursuits,brokerage, stock trading, magic, comedy etc and if exalted, makes the native very popular.
d)Mars in the 4th is extremely devastating unless it happens to be his sign of exaltation Capricorn or his own houses Scorpio and Aries. Sickness of mother, loss of job, property and vehicles and reputation are the imminent fall-outs. The native will invariably lead a maverick or nomadic life.
e)Venus in the 4th house as a benefic would be very auspicious even if debilitated. I have seen IAS officers with debilitated Venus in the 4th. The native has many vehicles , a beautiful house, vast chunk of cultivable land, fruit gardens, company of beautiful women etc. The native may choose a profession related to art, drama, cinema, singing, instrumental music etc. He may become a popular movie star if Venus is exalted in the 4th or in the 10th with lasting fame.
f)Jupiter in the 4th if under Kendradhipati Dosha or in debilitation can be disastrous. He may ruin the benefits of the 4th even in the normal course.

The 4th house holds the key to the superstructure of the native’s life. The 4th house is a path finder and basic indicator for many things. A strong connection between the 9th,ioth, and 4th houses connects fortune, profession and growth. The other houses and planetary combinations and Dasa effects can be better interpreted by looking at the strength or weakness of the 4th house. KDPR

Even well dignified Jupiter in the 4th may not be as effective as in any other Kendra. Exalted Jupiter in the 4th may be of no use as a matter of fact. However, if Jupiter is in conjunction with a benefic or with Saturn, the results could be good.
g)Saturn is ideal in the 4th despite his much maligned image as a malefic. Saturn in Kendra, in my observation, is extremely rewarding. The benefits given by Saturn in any Kendra are of a permanent nature and to the fullest extent. And the 4th house is no exception. The 4th house Saturn unless debilitated can give permanent political power, enormous wealth, vast fan following and permanent residence or contact with one’s native place. Even if debilitated the Neechabhanga Raja Yoga if it occurs in relation to the other planets(Mars or Sun) can catapult the native to great heights of political power.
h)Rahu and Ketu in the 4th would act like Saturn and Mars respectively. Rahu in the 4th is as good as a Raja Yoga for he bestows huge fortunes of a permanent nature. On the contrary, Ketu may rob the 4th house of the normal significations itself. The 4th house Rahu and 10th house Ketu bestow good results, especially with Virgo Rahu. But the pity is , by the time the results are actually realized, the native would have lost interest in them.
Chart 4 : Female: Born May 02, 1983 at OOh. 05m. at 20 N 58, 77 E 50. (Ay: 23-37-12) 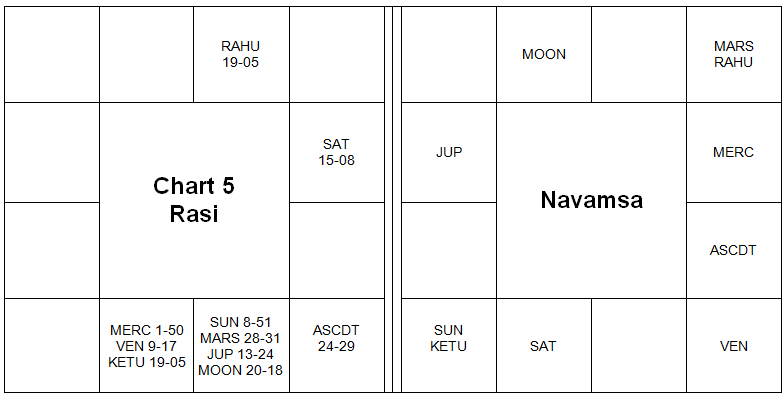 aspecting the 4th where the Sun and Mars are posited. It is surprising the house being the sign of one and the exaltation of the other, yet the native opted for a philosophical way of life away from mundane allurements. A simple explanation is the placement of exalted Sun and Mars in Aries which made her popular in her field of activity. The Sun being a planet of detachment of emotional ties and lord of Supreme Knowledge as Atmakaraka conferred such enlightenment on the native. In common parlance we may say that the native has no family, no friends and has renounced the world. But, it is a fact that aspirations of a different nature which she nurtured have been fulfilled. And the 4th house has been responsible for her choice of this kind of life.
The native of Chart 5 is a retired IAS officer who held the highest post of Chief Secretary of a State. Even after his retirement he had been given another Constitutional responsibility for another six years. There is no aspect on the 4th either by its lord or by any other planet. It is important to note that the native did not belong to the State where he received all the above benefits of his service. Here lies the crux of the matter. Though the lord of luck Venus, 4th and 7th lord Jupiter and lord of 10th Mercury conferred on the native the best results they could, all the benefits they bestowed were not in his home State but in a foreign land. This is particularly due to the placement of the 4th lord in the 2nd which is a Maraka house and his  conjunction with Mars, the lord of the 12th from the 4th. Here comes my proposition that the 4th lord and 4th house have to be strengthened by placement or aspect of the 4th lord or other benefics in order to give the best results of the 4th house.
Chart 6: Male: Born December 26, 1949, at 01 h.30m. at 21 N 09, 79 E 05. (Ay: 23-09-16) 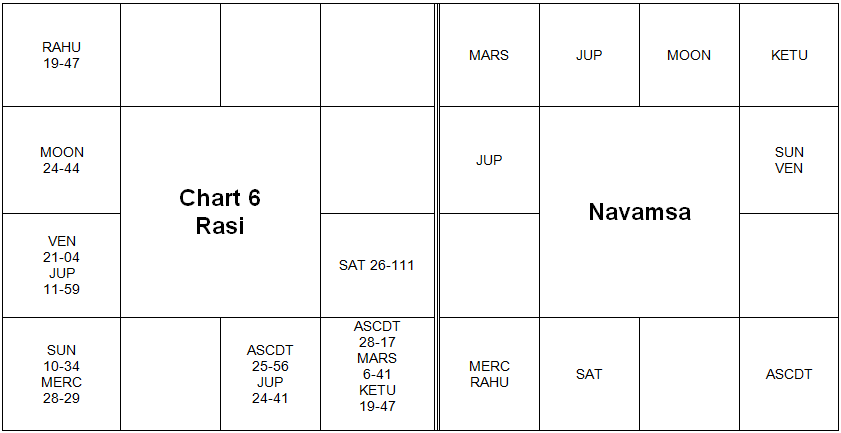 Chart 6 is again of a very senior Deputy Collector who has despite putting in 30 years of service has not got promoted to the IAS cadre while his juniors were lucky enough to supersede him. It is the biggest heart-burn for him. The 10th lord in the 4th house made him the Deputy Collector in his home State, certainly a top most post in the State. However, the 4th lord Jupiter in the 5th has been of no consequence, while on the contrary the Sun in the 4th has done considerable damage to the Bhava. The nature of the Sun is to burn up the significations of the house or the Bhava. Contrary to the popular belief, the Sun does not strengthen the house of his occupation but unlike Saturn leaves an adverse impact on it. To make matters worse Mars in the Ascendant casts his 4th house aspect on the Sun which did not make the native get close to his bosses. I have seen in many charts that Mars either in conjunction or in opposition or with any aspect on the Sun undoubtedly causes problems of insubordination and alleged disobedience. I have yet to see any native enjoying the patronage of his bosses with these combinations. The 4 th lord Jupiter is debilitated in the 5th to make matters worse.
Conclusions
The following are my findings on the 4th house
i)It signifies, apart from the mother, education, vehicular comforts and general happiness, the basic existence and standard of life of a native. This existence (astitva) of a native is crucial to interpret the results given by the other houses and Karakas. It is a simple fact that the basic existence is fundamental to all activity.
ii)It is responsible for consistent and permanent benefits bestowed upon the native or else the best results given by favorable combinations can prove elusive.
iii) Any benefits from permanent property relating to land, power or money connected with it has to be assessed through the 4th house alone.
iv) The relocation of a native from his place of birth or place of work or country has to be examined through the 4th house. For instance, a native settling abroad or having to spend a considerable time in confinement or prison has to be carefully examined from the 4th house. I have observed that when a malefic is in the 4th or aspects the 4th, the native will not stay in one particular place for long and he would be leading a nomadic life however great or ordinary he may be. Likewise, if the 4th lord is in the 12th house, one might settle abroad.
Summing up, I differ with many of the popularly held notions on the relevance of the 4th house. I have observed in a number of horoscopes the pre-dominant role played by the 4th house in establishing the native in a trade, occupation or profession and bestowing incredible fortune on the native. Similarly, I have also seen an afflicted 4th house or lord delay or destroy the benefits conferred by a strong 9th lord or of other Yogas.