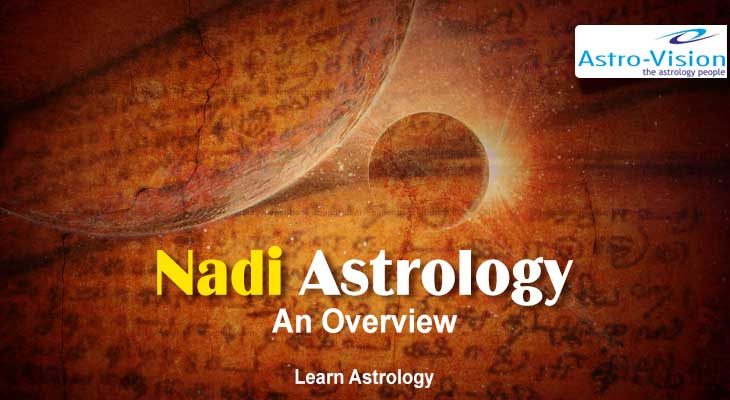 Nadi astrology has been receiving much attention from the astrological community, especially after the insightful writings on the subject by the late C.S Patel. Many new books as also articles on the subject keep appearing, each one dealing with either a particular classic or an innovative method of prediction adapted from a specific text. A few of these articles have also raised certain valid doubts and questions about the very rationale of the Nadi system while some others seek to understand the system better by examining its basic methodology, roots, extent, and scope of application, etc. It is an irrefutable fact that many secrets still remain to be revealed by the traditional practitioners of the Nadi system who possess (I presume) that information, especially in the case of Jeeva Nadis and Mantra Nadis.

Many scholars have been trying to unravel the secrets of the Nadi system based on their personal encounters, exposure, and conjectures. But, a comprehensive view of the whole system is still not available to the earnest student of astrology. Being an ardent student of this science for more than two decades, I am emboldened to share a bird’s eye view of this system with the readers.

The term Nadi is basically from Tamil and “which is loosely translated as a pulse in English. It also means in Tamil going in search or approach. According to another school, it connotes ‘the movement of breath’ (Swara). It is claimed that classical texts like Bhrigu Samhita, Garga Samhita, and Aruna Samhita which are prevalent in Northern India are also a part of Nadi astrology. Astrologically, the Nadiamsa (which is the basis for prediction in many texts) is a small arc of the Zodiac or its corresponding time. Such varying meanings of the word Nadi make it difficult to arrive at a precise definition of it. However, its actual meaning can be best understood by knowing its importance and application in the Siddha System of Medicine which is said to have been propounded by the 18 Siddhas who lived in South India because they are also said to be the original exponents of the Nadi System of Astrology in the South.

In Siddha Medicine, out of the 8 kinds of examinations employed for diagnosis of diseases, the examination of the Nadi (pulse) of the patient happens to be the foremost as it is considered to be the best and a reliable factor in diagnosing the disease accurately. According to Dr. S. Chidambarathanu Pillai[ Siddha System of Pulse Reading, page 73.]

“Nadi appears to be a syllogism with the two-fold theory of highly sensitive nervous activity with the influence of Praana on one side; and circulation of blood in the arteries, integrated with tridosha on the other side…(page 23)… Nadi manifests the macrocosm and the microcosm and that real truth of Nadi can be understood only if one goes into the deep study of seven kinds of generative processes of evolution of nature… Nadi (pulse) deals with the process of production, utilization, and laps of the organisms that lie between sky and earth”.

The seven kinds of generative processes of evolution of nature are dealt with in the branch of science known as Evolutionary Biology which deals with the study of evolutionary processes that produce the diversity of life on earth. According to this science, the change in inheritable traits of biological organisms over generations are due to natural selection, mutation, gene flow, and genetic drift (also referred to as descent with modification). Over a period of time, these evolutionary processes lead to the formation of new species (speciation), changes within lineages (anagenesis), and loss of species (extinction). Thus, it follows from the above facts that the real importance of Nadi can be known only after a thorough study of these evolutionary processes in both the microcosm and the macrocosm. In other words, the study of Nadi (pulse) in Siddha medicine is a complex one involving multiple parameters, and hence, it necessitates an independent and thorough study. Also, it is needless to emphasize that the art of understanding the Nadi (pulse) envisages a thorough knowledge of the nature and functioning of both the human body (microcosm) and the whole universe (macrocosm).

Like the pulse which unfolds everything about the actual state of the physical body and helps directly in diagnosing the disease(s) crippling it, the Nadi system of astrology also reveals everything about a person including his past, present, and future along with the Karmic causes responsible for one’s plight in a particular birth. In Ajeeva Nadi, the principal endeavour is to decode and understand all that is in store for a native at a particular point of time in life and lay them all bare by examining minutely either the birth time of a native or the time of the query. In Jeeva Nadi, clear clues are provided to the problems being experienced by the native at present and/or the impending dangers to the one who seeks/approaches it along with remedial actions to overcome them even without the use of any horoscope.

Generally, in the examination of pulse three things are most important viz., Sthala (site of examination), Gathi (rate and specific movement), and it’s Guna (nature). Each of these factors needs to be studied in detail for a better understanding of their use, for which readers may refer to any standard text book on Siddha medicine. Analogous to this, the Stithi (sign, house, and relative placements), Gathi (different types of movements), and Yuthi (various conjunctions) of planets are of prime consideration even in Nadi astrology apart from Karakas (natural significators).

The principles employed in the Nadi system of astrology are quite similar and analogous to the basis of pulse examination in Siddha medicine. Astrologically, the five planets from Mars to Saturn (Taragrahas) signify the physical realm (sthoola jagat) each ruling an element among the Pancha Tattwas while the remaining two planets Sun and Moon influence the subtle world (Sookhma Jagat) being the rulers of the soul (Atma) and the mind (manas) respectively. The two shadowy planets Rahu and Ketu relate to the invisible world and deal with the unseen and hidden energies prevalent in both the microcosm (living beings) and macrocosm (the Universe) and bear a direct relationship with the Karmic causes controlling both of them. The planets happen to be the basic significators (Karakas) even in Nadi astrology and their influences (Stithi, Gathi, and Yuti) in the chart are the foundational concepts for prediction. Of course, the significations of planets are the same in all systems of astrology. But, the techniques of interpretation vary from one to another. The Nadi texts use many additional techniques like Nadiamsas, sensitive points like Bhrigu Bindu, the influence of Horas, planetary cycles, Vedic progressions, trinal conjunctions, Tattwa-based aspects, transits of planets on natal positions, a special way of reading the Vimshottari Dasa by treating Dasa and Bhukti lords as the Ascendants, etc which are not employed in the conventional Parasari system.

It is true that not all Nadi texts use the same technique for prediction. Some of them are based on the planetary placements in the natal chart i.e, either from the Ascendant or in the Zodiacal house. Some others use Nadiamsas, Horas, houses from the natural significators (Karakath Bhava), etc. They differ from one another and there are diverse tools and techniques employed in them. But, the most common factor is that they all aim at diagnosing and decoding everything possible about an individual as regards his past, present, and future precisely and accurately. Some texts even provide very minute details like name of native and spouse, names of parents, number of co-borns, details on one’s birth environment, etc. Thus, it can be seen that while the Nadi in medicine decodes the bodily health condition of a native, Nadi astrology unravels the condition of one’s Providential influences comprehensively in life as a whole.

The Nadi texts are classified as shown below 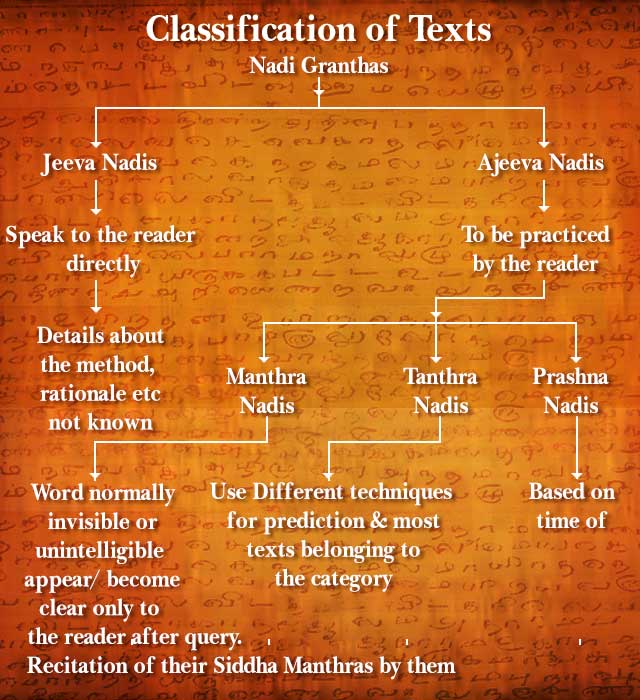 The following important points need to be reiterated:-

a)Except for the fact that the Jeeva Nadi readers possess such palm leaves and that they are able to give very stunning predictions as and when they are approached, very little information is available about these Nadis. Neither their methodology nor any other details about them are shared by those who possess them, probably for the reason that they are either forbidden to reveal them or they themselves are not actually aware of these details.

As regards the Mantra Nadis, there is a strong claim by many stalwarts of astrology that they are spurious. In the words of Dr. B.V.Raman, “there were quite a number of spurious works going under the name of Nadi Astrology. These were Mantra Nadis based on acquisition of control over uchchista (profane) or Kshudra(mean or low) mantras. This gave the past accurately misleading the consultor about the future”. (The Astrological Magazine, April 1971, page 369). In other words, Mantra Nadis cannot be brought under astrology itself as they are dominated by negative energies.

1) The Tantra Nadi and Prasna Nadi are based on astronomical and astrological factors and they alone merit the consideration of all students and practitioners.