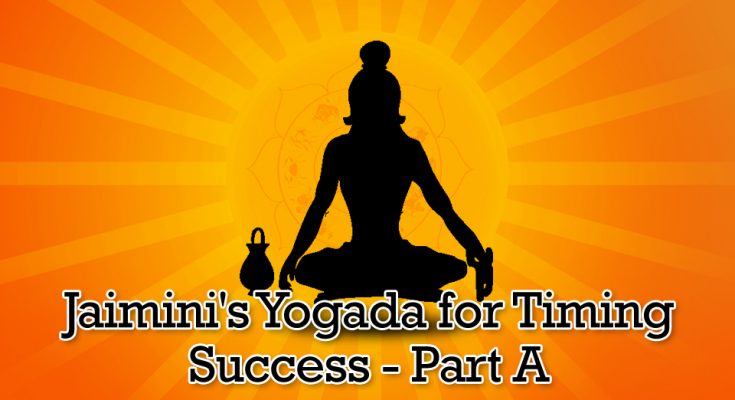 Ever since I started learning astrology the concept of Yogada has always intrigued me. There have been references to this concept in the Jamini Sutras as well as in Brihat Parasara Hora Sastra. What remains a mystery is the timing of events using Yogada planets and signs. The aim of this paper is to invite astrologers to judge for themselves if the concept holds good or not.
Yogada is a very powerful concept, the equivalent of the Yogakaraka planet in the Parasari system. It has taken me a long time to write this paper, as the challenges faced were innumerable. The biggest problem was the calculation of Hora Lagna (HL), Ghatika Lagna (GL) and Bhava Lagna(BL). Even a slight change in time would change the three signs. In addition to that,the calculation is based on sunrise time and different softwares take different times for sunrise and thus have the three Lagnas HL, GL and BL placed in different signs. To overcome this obstacle the first thing I did was to take AA certified charts from Astrodatabank and use only those charts in which HL, GL and BL were in the same signs in most reputed and widely used astrological software.
The second challenge was the application of the concept itself. The Sutras state that a planet is considered a Yogada when it aspects the HL, GL and BL, the natal Ascendant as well as the 7th house in the natal chart as well as Navamsa (D9) and Drekanna (D3). In addition to that there should be an unobstructed Argala (is formed by the planets occupying the 2nd, 4th and 11th from the sign. If there are planets in the 12th, 10th or 3rd, then the Argala is not formed) to the Yogada planet. The higher the number of Yogada planets, the better it is in a chart.
I must concede, I have yet to see a chart where this concept applies completely. I use the concept liberally and not literally , and I truly believe that if this is not done, no new research will ever take place.
Coming to the most important aspect, I have taken Yogada planet as one that at least aspects the HL, GL and the natal Ascendant in the birth chart. Trust me, even finding these has been a challenge. After examining over 300 charts, I was able to gather a few charts where I have found Yogada planets and have to say the following:-
•The time period of signs containing the Yogada planets can be particularly good, keeping mind only Jaimini aspects.
•The time period of a sign from where the Yogada planet falls in the 10th can be a period of great rise.
•Specially for politicians and rulers, the time period of a sign from where the Yogada planet falls in the 7th, can be very fruitful.
The qualification of the planet and the sign to judge the strength in order to determine the result a planet or a sign will give must also be borne in mind.
Any planet that is exalted, in own sign, a great friend’s sign, Vargotamma, involved in an exchange or has directional strength can give results very powerfully. Additionally if it has similar strength in Navamsa and other divisional charts, the potency of the planet increases exponentially. What I would like to add here is that debilitated planets in the right condition can give pretty extraordinary results as well. A whole paper would have to be written on that, so I will just let that be.
Read more on Vargottama planet
Coming to the Jaimini system, a sign gains strength if it has benefics placed in Kendras from it. An additional source of strength is if the sign is aspected by Jupiter and Mercury . Here we are talking about Jaimini aspects only. In addition to this, any sign getting Argala from more than 2 planets gains strength. If the Argala is a Subha Argala, then it becomes even better. I apply Trikona Argala to charts as well.
After seeing the strength of the planet and the sign , one should pay special attention to the sign containing the Amatyakaraka (AmK) or from where AmK falls in the 10th, that period can be special for career rise.
Chart 1 of a former Prime Minister of India, Rajiv Gandhi is quite extraordinary with all the benefics in the Ascendant with a strong Ascendant lord. What is really remarkable is that all five planets in the Ascendant become Yogada. His HL is Leo and GL is Libra. The sign Leo itself contains all the benefics including Mercury and Jupiter. Leo gets unobstructed Argala from Mars in the 2nd house and Saturn in the 11th house. We will not dwell on the malefic hemming of Leo and the Argala being formed by malefics only, as the idea here is to see how clearly the concept of Yogada planet applies and how events can be timed.
Chart 1: Rajiv Gandhi: Born August 20, 1944 at 8h.11m. at Mumbai (18 N 58, 72 E 49).
Chart 2: Austrian Emperior Franz Jospeh: Born August 8, 1830 at 9h.15m at Vienna, Austria (48 N 12, 16 E 22) 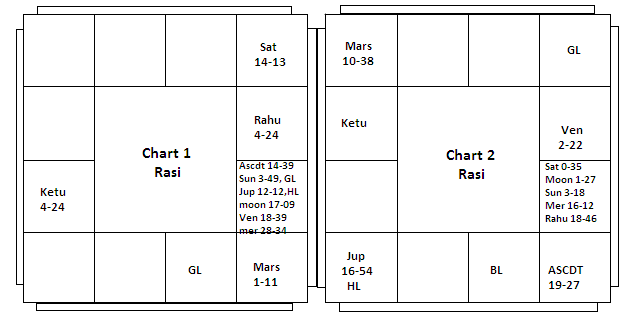 Keep in mind this is a chart of a politician a reluctant one at that who nonetheless did become one under tragic circumstances. His mother. Indira Gandhi, the then Prime Minister of India, was shot dead by her own bodyguards. This unfortunate accident happened on the morning of October 31, 1984. Later that day Rajiv Gandhi was sworn in as the Prime Minister of India. He was running Aquarius Dasa which started on August 20, 1984. All the Yogada planets are in the 7th house from Aquarius.
The Austrian Emperor Franz Joseph (Chart 2) was the longest running emperor of Austria and the king of Hungary, as well as the third longest reining monarch of any country in European history, who ruled for 68 years. The concentration of planets in the 12th house will make any one doubt the validity of the horoscope, but remember that he was born in royalty and the birth times of royalties have been well documented. He became emperor at the very young age of 18 on December 2, 1848. It was the Dasa of Sagitarius and the Antardasa (Bhukti) of Gemini. With the HL falling in Sagitarius and GL in Gemini, Jupiter and Mars become Yokaraka planets. His ascent to the thrown took place in Sagitarius which has Jupiter, the Yogada planet, and the Antardasa of Gemini, from where Jupiter is in the 7th.
Courtesy: Modern Astrology (Rohit Shankar)                                                       to be continued…

2 Comments on “Jaimini Yogada for Timing Success – Part A”