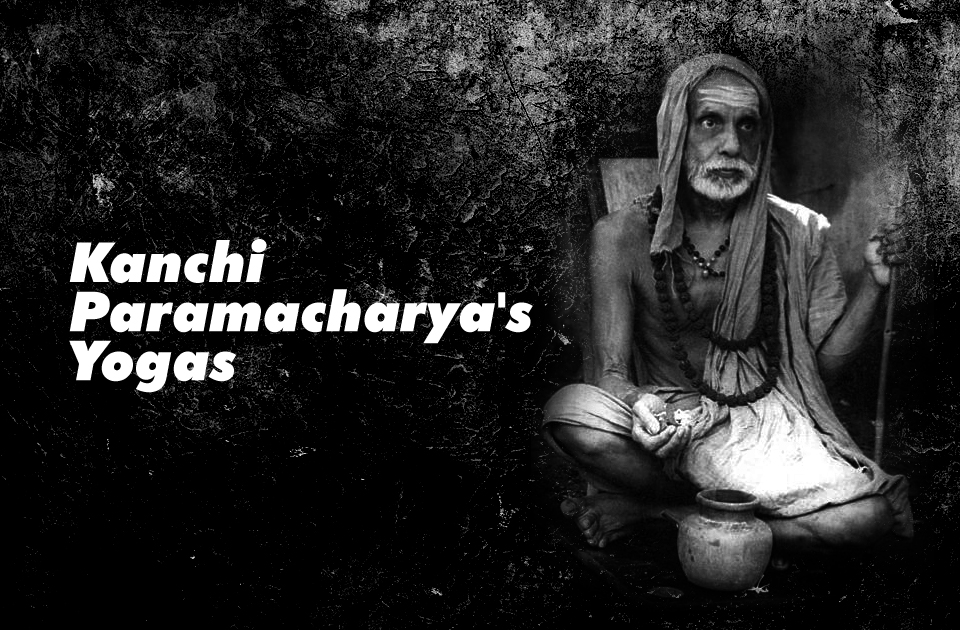 In 1907, the 66th Acharya of the Kanchi Kamakoti Peetam shed his body attaining mukti (Emancipation). A young lad was installed on the sacred pontifical seat. Though this led to great rejoicing amongst devotees, there was depression and sorrow in the young man’s own family. Which parent can reconcile to the fact of a promising lad assuming ochre robes to lead the life of an ascetic ? It was in these gloomy circumstances that the lad’s maternal aunt set out to console his mother, her own sister. The aunt took her own children along with her. But fate had other plans for this devout lady. The young pontiff suddenly developed fever and attained mukti. And so, the math decided the aunt’s own child, the ten-year old kid Swaminathan, would be the next pontiff. This unexpected development which dealt a great blow to the pious woman who hacf set out to console her sister but now needed to be consoled herself occurred in 1907 when transit Saturn was in Aquarius in the 4th from the young boy’s Moon in Scorpio bringing the chart under ardhastama or the transit of Saturn

The young pontiff’s zest for learning was phenomenal and the range of his knowledge covered a wide spectrum of subjects that included not only Vedanta, the most abstruse yet peifect system of philosophy the world has ever known, but also such mundane topics as mathematics, languages – Indian and foreign-astronomy, astrology, archaeology, arts and architecture and others.

in the 4th from the Moon. This transit rocked the life of the boy, snatching him away from his pious mother and putting hini in the confines of an impersonal orthodox spiritual order. Transit Jupiter too was unhelpfully placed in Gemini in the 8th from the natal Moon.
Kanchi Paramacharya: Born May 20, 1894 at 13h. 16m. at 11 N 56, 79 E 29 with a balance of 1 year 8 months 7 days of Saturn Oasa at birth.

The Dasa was of a malefic Mercury, ruler of the 2nd and the 11th, and the Bhukti, of Rahu. Mercury, no benefic for the Ascendant Leo, is yet powerfully placed in a favourable position in the 10th in the most powerful Kendra in exact degree conjunction with the Ascendant lord Sun. This conjunction of the Ascendant lord and Mercury in the 10th endowed the lad with precocious intelligence and an extraordinary memory, requisites indeed for occupying the sacred seat of Advaita in Kumbakonam. The boy’s zest for learning was phenomenal and the range of his knowledge covered a wide spectrum of subjects that included not only Vedanta, the most abstruse yet perfect system of philosophy the world has ever known, but also such mundane topics as mathematics, languages – Indian and foreign—astronomy, astrology, archaeology, arts and architecture and others.
The Sun-Mercury combine is not merely Buddhikaraka Mercury joining the Ascendant lord but rather a powerful Budha Aditya Yoga occurring in the 10th house orienting thereby the entire chart academically and intellectually.
Rahu, the Bhukti lord, is in the 8th with 10th lord exalted Venus. Mercury as Dasa lord is in the 10th and Venus as 10th lord influences Rahu powerfully. The pontificate descended unexpectedly on the little boy as a legacy. The death of his cousin paved the way for the lad’s ascent to power and position.
The young lad who was to dazzle the world in later years with his spiritual tapas and intellectual acumen was Sri Chandrasekhara Saraswati popularly known and revered as the Paramacharya of Kanchi. On February 2nd, 1907, the little boy Swaminathan was officially installed as the 68th Acharya of the Peetam. Jupiter Bhukti had just begun. Jupiter and Mercury occupy the 10th house.

The Ascendant Leo is a powerful sign by itself; it is rendered even stronger by the aspect of Yogakaraka Vargottama Mars. Mars as 9th lord in the 7th influencing the Ascendant, the Ascendant lord, the 10th house and its occupants is an important factor that contributes to the spiritual potential of the chart.

The Ascendant Leo is a powerful sign by itself; it is rendered even stronger by the aspect of Yogakaraka Vargottama Mars. Mars as 9th lord in the 7th influencing the Ascendant, the Ascendant lord, the 10th house and its occupants is an important factor that contributes to the spiritual potential of the chart. Any chart for that matter whose Ascendant or its ruler is connected favourably with the 9th lord carries in it, whether apparent or not, spiritual inclinations. Here Mars as 9th lord has a dominant role in influencing the chart as a whole.

…. his inner quest and growth did not lag behind, largely due to the powerful disposition of the Manahkarka Moon. In the 4th, the Moon obtains Digbala. The Moon gets Neechabhanga from several sources. . . . Additionally, the Moon is Vargottama and with maximum Pakshabala or digital strength, birth having occurred in Pratipada of Krishna Paksha or the first lunar day of the dark fortnight The Moon occupies Anuradha Nakshatra ruled by Vairagya Karka Saturn.

The Ascendant is exceptionally strong which is why the Acharya’s reputation for his tapashakti (austerities) and brilliance kept growing over the years obtaining for him an unrivalled place in the hearts of millions of devotees everywhere. But even as his fame became legendary, his inner quest and growth did not lag behind, largely due to the powerful disposition of the Manahkarka Moon. In the 4th, the Moon obtains Digbala. But as Matrukaraka in the relevant Bhava of Matrustana, the Moon robbed the pontiff of the proximity and loving care of the mother. The Moon is Neecha but gets Neechabhanga from several sources. Mars, his sign-dispositor, is in a Kendra both from the Ascendant and the Moon which is a strong Neechabhanga factor. Jupiter, the planet who gets exalted in a.lunar sign (sign ruled by the Neecha planet), is in a Kendra from the Ascendant and also from the Moon neutalising the Moon’s Neechattwa (state of debilitation). Additionally, the Moon is Vargottama and with maximum Pakshabala or digital strength, birth having occurred in Pratipada of Krishna Paksha or the first lunar day of the dark fortnight. The Moon occupies Anuradha Nakshatra ruled by Saturn, the 6th and 7th lord. Saturn is the Vairagya Karaka or the significator of renunciation and in Vargottama in Virgo Rasi with Kaivalya Karaka Ketu all of which resulted in a celibate life with the mind always reaching out to sublime heights of spirituality.
The Moon is in Vrischika (Scorpio) Navamsa, a Martian Navamsa, aspected by Saturn which is a Yoga for renunciation or sanyasa.

JP XV-25
Four planets in the 10th are also said to lead to a life of asceticism.

JP XV-13
If the occupants of the ज्ञान (Gnana – 5th, 4th and 2nd?) and the 10th Bhavas as well as the lords of the 1st, the 9th and the 10th be possessed of abundant six-fold strength षड्बल (Shadbala), the
person bom will be conversant with the six sciences and know all the Vedas and will receive initiation in sacred knowledge. In the पाक (Paka) and अपहार (Apahara) of the lords of the 9th, 10th and 1st Bhavas, of Mercury and of Jupiter, he will become a mine of sacred knowledge and science securing to him the benefit of performing sacrifices of all descriptions and all kinds of beneficient works.
The Gnana Bhavas referred to here are the 5th, 2nd and the 41th. The 5th and 4th houses are vacant. The 2nd house has Vargottama Saturn and Ketu. Saturn’s Shadbala (3 00) Rupas) or lack of it is compensated for by his Vargottama position. Mercury, Jupiter and Sun as occupants of the 10th have respectively 5-22, 8-17 and 10-29 Rupas. The 1st lord Sun, the 9th lord Mars (5-31 Rupas) and 10th lord Venus (7-72 Rupas) are all strong in Shadbala attracting the results of knowledge and spirituality. Appropriately enough, the installation on the Shankara Peetam occurred in Mercury Dasa, Jupiter Bhukti – the Peetam standing for the ultimate in knowledge (Vidya-Mercury) and spiritual wisdom (Gnana-Jupiter).
The remaining years of the Dasa of Mercury covered the period of training of the Acharya in the Vedas and Vedangas. Mercury is in exact conjunction with the Sun, symbolic of the soul, and joined by Jupiter (philosophy). The training continued also into the Dasa of the Kaivalya Karaka Ketu. The math which was managed by a court of wards until then came under the Acharya officially in May 1915 when he had just turned 21 years. Here again one may note Moon Bhukti of Ketu Dasa was on. The Moon aspects the 10th house powerfully. Ketu acts like Mars who also aspects the 10th from his Vargottama position in the 7th. Transit Saturn was in Taurus in the 7th from the Moon and transit Jupiter in Pisces aspecting natal Moon trinally.
One of the major duties enjoined on the pontiff of the Maths and its branches established by Bhagavatpada Acharya Shankara is to travel extensively across the country so as to keep the flame of Advaita burning in the hearts of the populace. The first of several such tours began in March 1919. Transit Saturn was in Leo while Jupiter was in Gemini.
The period of Ketu was ending and Venus Dasa was due to begin. This marathon journey took the Acharya through the length and breadth of the country and covered a period of exactly 20 years ending as it did with his return to Kumbhakonam in June 1939. Venus Dasa ended in December 1939.

Six planets in Kendras produce a powerful Chatussagara Yoga which resulted in a muMfaeeted personality and an extraordinary Pravarajaka Yoga. The Paramacharya shone like a beacon of light through an entire century lighting the path of Dharma for countless seekers.

In 1954, the Acharya appointed his successor Sri Jayendra Saraswati in Moon Dasa, Venus Bhukti. This also coincided with the start of sadesathe or Saturn’s seven-and-a-half years cycle on the Acharya’s Janma Rasi. Through the next Dasas of Mars and Rahu and part of Jupiter Dasa, the Achaiya played a significant role in revitalizing Hinduism at a time when materialistic values from across the seas were beginning to seep into and erode the spirit of society. He evolved three schemes which took the shape of three organizations for the preservation of the Vedas and Sanatana Dharma, for the propagation of Advaita and lastly for the unkeep of temples by involving local people in the task of their maintenance and renovation. The Paramacharya worked to bring together modern thinkers and traditional scholars in a bid to pursue the objectives of these organizations.
In 1984, the Paramacharya set out on a long tour of parts of the country returning to Kanchipuram 6 years later. After that, he gradually went into an introspective state reducing his interaction with the outside world to the barest minimum. Finally, on January 8, 1994 the Paramachaiya gave up his body to merge into the Divine bringing a glorious era to an end. This was in Jupiter Dasa, Mars Bhukti. Jupiter is with the 2nd lord Mercury in the 7th from the Moon. Mars too is a Maraka being in the 7th from the Ascendant. Transit Saturn was in Aquarius in the 7th from the Ascendant.

Six planets in Kendras produce a powerful Chatussagara Yoga which resulted in a multifaceted personality and an extraordinary Pravarajaka Yoga. The Paramacharya shone like a beacon of light through an entire century lighting the path of Dharma for countless seekers.