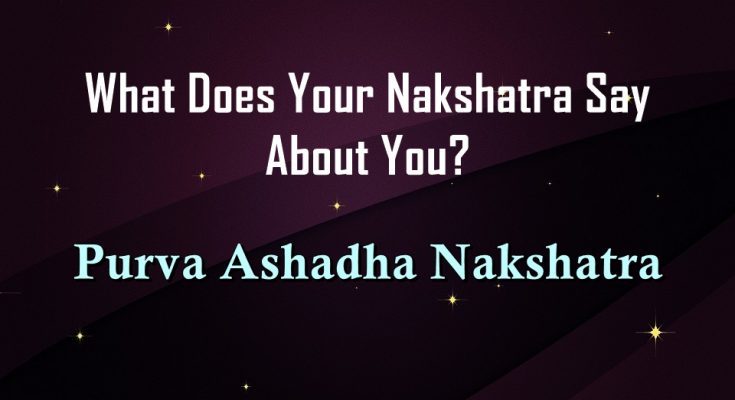 According to some ancient texts, the deity of Purva Ashadha Nakshatra is Daksha who is the son of Brahma ie, Prajapathi. Daksha is the father of 28 lunar mansions that we called Nakshatras. Out of 28 Nakshatras, 27 ladies are married to Chandra and the remaining one is “Abhijeet” a male Nakshatra. Daksha was also the father of Sati, who was the wife is Lord Shiva and she committed suicide because her father insulted her husband. Lord Shiva got angry with Daksha and beheaded his head and placed a goat head on Daksha.

Purva Ashadha has another name Aparaajitaa (undefeated). It connotes the idea of victory. As the name denotes, Purva Ashadha people are committed to defending their own views and values. This makes them often fall into arguments. They may have to find logical reasoning for these arguments so that others can also understand their views. They have the strong influence of Mars in their natal chart which is making them argumentative as Mars is the god of wars. The Nakshatra’s symbol is a fan, indicating power, status, wealth and popularity.

In a Purva Ashadha person, we can see that Venusian energy which is symbolized through three bright Nakshatra Epsilon-Sagittarii (Kaus Australis), Delta-Sagittarii (Kaus Media) & Epsilon-Sagittarii (Kaus Borealis). These three stars are in the constellation of Sagittarius. Kaus Australis, having a visual magnitude of 1.81, is the brightest among these stars. Ancient Vedic rishis saw these stars as forming the shape of a hand-held fan. Purva Ashadha Nakshatra is symbolized by the tusk of an elephant, a handheld fan, and a winnowing basket. The fan represents the destruction or intensification of the fire. Winnowing basket is used to remove the husk of the grain.

Goddess of Purva Ashadha is Apah or Laxmi and Apah is identified with Aphrodite in the west. These people display the Jupitarian quality of magnifying things ambition, adventure, faith, exuberance and philosophy find their roots to this Nakshatras and we can see them having a lot of Venusian energy as well.