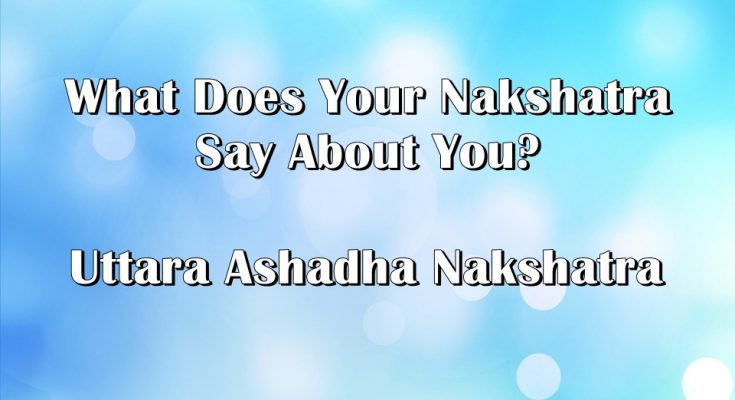 Ruled by the sun where the first quarter goes to Jupiter rules Sagittarius and the remaining 3 quarters go-to structure-oriented sign Capricorn ruled by Saturn.

Vishwadevas act as a deity to this most powerful star. The ten Vishwadevas are known for goodness, truth, skill, time firmness, enlightenment come into play through Uttara Ashadha.

Ascella, the 4 stars which look like an elephant tusk to the ancient seers, comes with thin Zeta Sagittarii, (Sigma-Sagittarii (Ascellä), Tau-Sagittarii, Phi-Sagittari/& Zeta-Sagittarii (Nunki)) with visual magnitude 2.07 is known as Uttara Ashadha Nakshatra Elephant tusk is the primary symbol of this Nakshatra. Tusk, is the main identification of the best elephant, Uttara Ashadha people are very eager to be in the lead role which may create issues for them. As the elephants were much connected to royal life, it was the main animal in a king’s palace, Uttara Ashadha people like to be in that royal circle. Indra king of Devas also rode a white elephant. It shows the importance of this animal even in the world of Devas.

Sun is the main ruler of this Nakshatra, it is believed that after taking the rise in Krittika, Sun becomes non-existent in this Nakshatra. The four padhas of this Nakshatra are ruled by Jupiter and Saturn and the rulership of the Sun, these people stand for the universal betterment. The practical and grounded approach to Saturn is getting mixed with the energy of debilitated Jupiter, on top of the zero ego behavior of the soul makes this person believes only in action and submission towards the universal consciousness.

Lord Ganesha is believed to be born in this Nakshatra who wrote the eternal epic Mahabharata as per the request of Ved Vyas.

The Sun in Uttara Ashadha: Humanitarian, spiritual nature, desire to change societal values; research-oriented, learned, philosophical nature, deep thinker, well-known but controversial, strong speech, the fighter for a cause. This is an upward Nakshatra and all upward Nakshatras are good for growth. This Nakshatra signifies expansion and prosperity. These people progress over time.

This Nakshatra is a Dhruva Nakshatra as well, a person born in Dhruva Nakshatra has a stable nature. These people are determined forgiving and patient. They handle every situation patiently. Uttara Ashadha is considered as the ultimate Nakshatra of peace. Dhruva was a demon king who was a worshipper of Lord Vishnu and Uttara Ashadha displays all the characters of Dhruva Tara.