Did you know that your skin is the largest organ of your body? It is, in terms of both weight between 6 and 9 pounds and surface area about 2 square yards! Your skin separates the inside of your body from the outside world. It protects you from bacteria and viruses and regulates your body temperature.

What are the astrological factors that govern skin-related medical conditions?
Role of Saturn and Mercury
Saturn and Mercury account for almost all type – of skin diseases and disorders. Additionally the Ascendant (general mental and physical health), the 2nd house (face, pimples on face, facial scars), the 6th house sickness – acts as a trigger for disease), Saturn (natural significator of skin, age-reared problems, eczema, incurable diseases), the Moon (blood impurity, anaemia), the Venus (beauty of skin), the Mercury (stress in life, skin problems), the Mars (boils, rashes, allergies, measles), the Jupiter’s influence on the 11th house or 11th lord or both (Jupiter ruling metabolism and toxicity) and a Mercury – Saturn link all come into play when examining a horoscope for skin ail-ments.
Saturn provides for the drying of the surface epidermis, the prevention of excessive blood flow and the slowing down of nerve signals (such as pain, pressure, vibration).
Astrological Factors
The 6th house factors listed above need to be identified along with the Mercury – Saturn link. The Moon and Jupiter play a role in cases of weeping eczema and other blistering skin diseases-Eczema, also known as atopic dermatitis, is a long term skin disease. The most common symptom are dry and itchy skin, rashes on the face, aside like elbows, behind the knees and on the hands and feet. Currently, there is no single test to diagnose eczema, so doctors rely on information about the patient and his family.
The 6th lord Mercury in Chart 1 is involved in an exchange of signs with the lord of the (Ascendant physical body). The 8th lord Sun is in the Ascendant with the 5 th and 10th lord Venus or significator of beauty of skin, and Mecury, significator of skin problems. There is exchange of the 6th lord with the Ascendant cum 2nd lord Saturn (significator of skin). The relationship thus established is a clear indicator of some skin related problem which in this case is eczema.
Chart 1: Male : Born January 3, 1982 at 7h. 35m. at Patiala (30 N 42, 76 E 54) 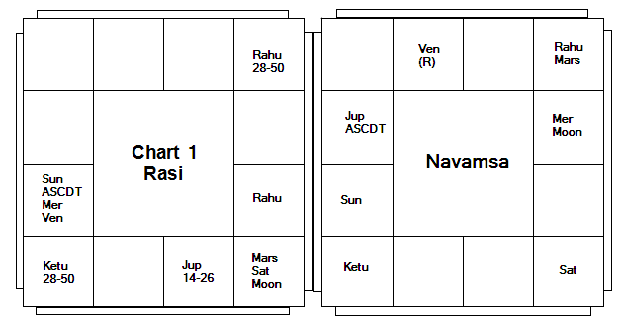 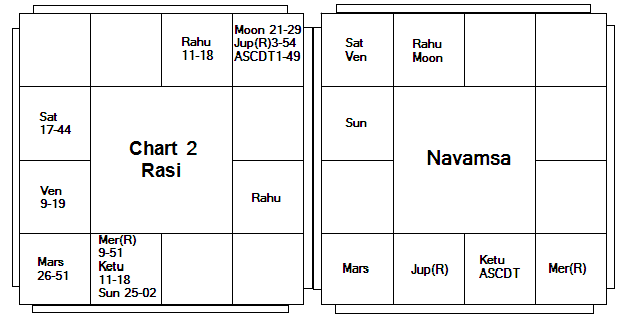 Weeping Eczema: The Ascendant lord Mercury is in the 6th conjunct the 3rd lord and caught in the Rahu- Ketu axis in Chart 2. Saturn as the 8th lord aspects the Ascendant lord Mercury fulfilling the main condition of the Saturn-Mercury link, often the chief indication of skin problems. Venus is also in Saturn’s sign and the Moon under the influence of the 6th lord. This is a case of weeping eczema due to involvement of Jupiter and. the Moon.
Vitiligo and leucoderma are two different terms but used for the same kind of skin disease.
Leucoderma known as white patches is due to the absence of melanin pigmentation in the skin.
However, vitiligo can be due to improper hygiene, unhealthy food combinations, regular intake of junk food, insecticide and pesticide treated green vegetables taken regularly, past history of jaundice or typhoid fever, harsh antibiotic use etc. An important cause of vitiligo could be sudden emotional trauma and stress.

Due to one reason or a combination of the reasons, toxins are formed inside the body which disturb the immune system which results in autoimmunity (a condition in which the immune system of the body destroys its own cells and tissues). This autoimmunity is the basic important reason for vitiligo according to both Ayurvedic as well as Allopathic systems of medicine. 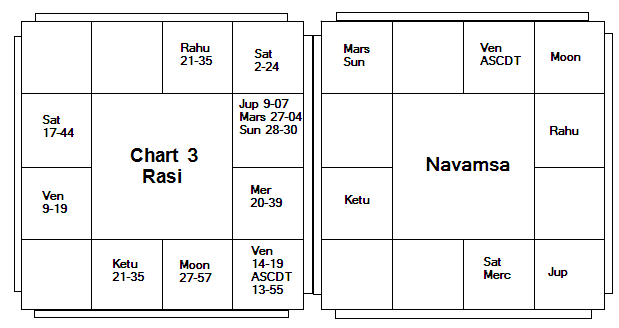 Vitiligo: The 6th lord Saturn in Chart 3 aspects Mercury, the chief significator of skin diseases, while debilated and combust Mars aspects the Moon, Mercury here is the lord of the Ascendant or, physical body. In Navamsa. Saturn is conjunct Mercury and is placed in the 6th house. The child was found to suffer from vitiligo in 2004 in the Dasa of Jupiter (the planet of expansion) who is a malefic and Badhaka as he owns two Kendras and in the Bhukti of the Moon, the dispositor of Jupiter, Sun and Mars. The Moon is aspected by debilated Mars. Jupiter in the 11th is in expansion mode and therefore aggravates the spread of the disease during his Dasa and Bhukti.

Melanoma is a severe and potentially life- threatening skin cancer and its symptoms put briefly are
(i) Asymmetry: the shape of one half does not match the other;
(ii) Border: the edges are ragged, blurred, or irregular;
(iii) Color, the color is uneven and may include shades of black, brown, and tan; and
(iv) Diameter, there is a change in size, usually an increase.
Chart 4: Male: Born February 22, 1982 at 19 h, 30 m at Mont-ford Bridge, United Kingdom (51 N 30,0 W 07) 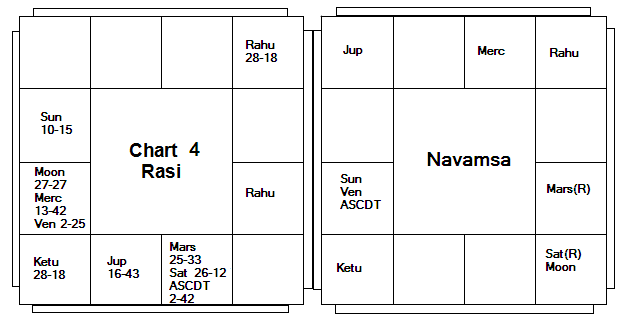 Melanoma: The Ascendant lord is in exchange of signs with 6th lord Saturn, establishing a relationship and completing the basic requirement for skin disease by connecting Saturn and Mercury in Chart 4 which is a case of melanoma. Saturn establishes a link with Venus and the Moon . In most of the cases of cancer Saturn as significator of wasting and degenerative disease either aspects the Moon, Venus or both. In Navamsa Saturn and the Moon again share the same sign.
Psoriasis is a skin disease that causes scalling and swelling with patches of thick, red and silvery scales. These patches can itch or feel sore.

Apart from the usual astrological factors, Rahu and Ketu are also important for sudden onset of the disease. 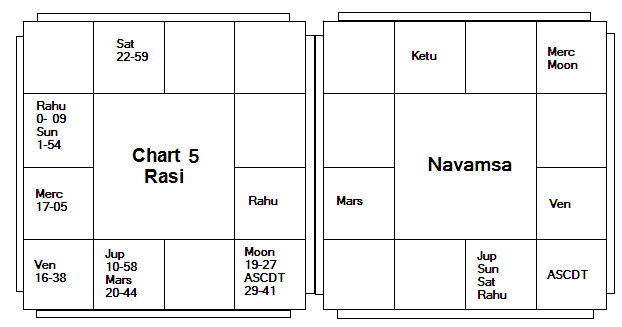 Psoriasis: The Ascendant lord Mercury is in the 5th aspected by the 6th lord from the 8th house in Chart 5. The Saturn-Mercury combination is responsible for the skin condition. Jupiter aspects the 11th house and is related to the 6th lord Saturn through the 8th and 3rd lord Mars. The lord of the 64th Navamsa and the 22nd Drekanna is Jupiter. Jupiter is in the Nakshatra of Saturn. 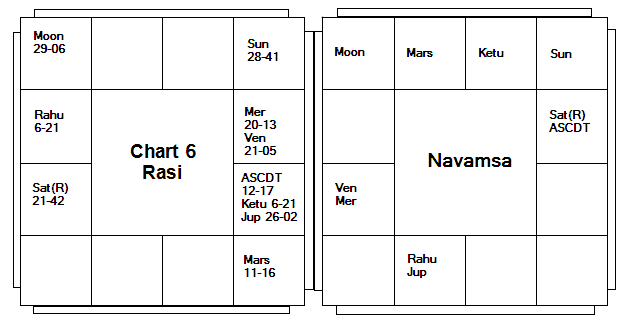 Skin Cancer: Saturn as the 6th and 7th lord establishes a relationship with both the Moon and Venus, primarily for a cancer combination, in Chart 6. As regards the cancer striking the skin Saturn is in aspect with Mercury and Venus in the 12th house. The Ascendant lord Sun is aspected by malefic Rahu. In Navamsa Saturn is again aspecting Venus.