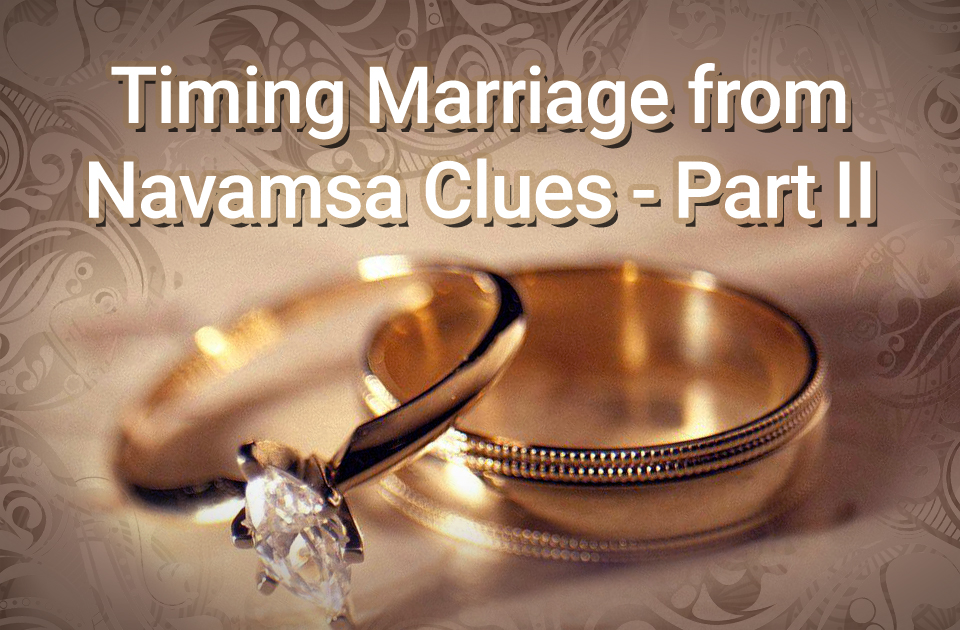 The Navamsa chart comes in handy in cases where two people are caught in an emotional involvement and which the parents have difficulty in accepting. At such times, the Navamsa can be examined to find out if the involvement will end in marriage or disappointment. Here again, it must be emphasized that what the Rasi chart does not indicate cannot be found simply on the basis of Navamsa positions. The Rasi, as is clearly known, is deemed to contain within itself a heap or multiplicity of details relating to all aspects of life, not excluding marriage. Therefore, even in the kind of cases where two people are in love, the Rasi chart is the first thing to scrutinize for the course the involvement will eventually take. But where the clues here are not clear or are contradictory on the basis of relevant factors, the Navamsa chart gives helpful hints.
The 5th house rules emotions and the 7th house, marriage. Therefore any connection between the 5th and 7th houses in Navamsa is more or less a clear indication the romantic friendship will lead to the altar. This relationship can be with reference to either to the Rasi Ascendant or the Moon-sign.
Reverting to Chart 1, the 5th lord from the Ascendant Leo is Jupiter while Saturn is the 7th lord. In Navamsa, the two planets are in mutual aspect. This relationship is repeated fa Second time if Chandra Lagna or the Moon-sign which is also Leo is considered. The marriage followed a courtship.
Chart 3: Male: Born April 24, 1976 at 11 h. 15m. at 13 N 05, 80 E 18 with a balance of 5 years 11 months of Rahu Dasa at birth. 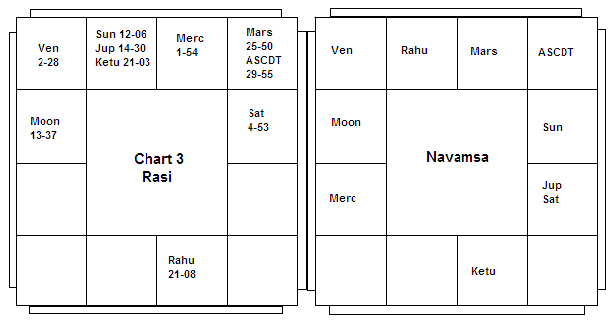 In Chart 3, marriage took place in March 2001 in Mercury Bhukti, Saturn Dasa. The Dasa and Bhukti lords are in Shashtashtaka positions in the Navamsa. The Bhukti lord Mercury is the ruler of the Navamsa Ascendant. This young man working in the U.S. for a software firm fell in love with a colleague and married her. Initially, the mother showed some resistance to the match but when the horoscopic indications were explained to her and it was pointed out their marriage was likely, she gave in. The 5th lord Venus and the 7th lord Jupiter are not directly related. But the 5th lord from the Moon, namely, Mercury and the 7th lord Sun are in mutual aspect in Navamsa showing the strong possibility of the involvement ending in marriage.
Chart 4: Born February 11, 1965 at 2h. 30m. at 28 N 36. 77 E 12 with a balance of 3 months 5 days of Moon Dasa at birth. 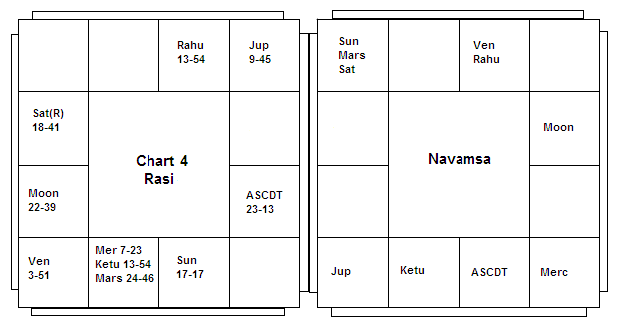 In Chart 4 of a popular film star, a Muslim married to a Hindu, the 5th lord is Jupiter and the 7th lord is Saturn. Saturn aspects Jupiter in Navamsa. However, it must be clarified at this stage that simply because such a relationship obtains in the Navamsa chart, one cannot jump to the conclusion that a love-marriage is certain. But where the Rasi chart shows an emotional involvement, the Navamsa condition if fulfilled can be deemed to assure of its culmination in marriage. The absence of such a relationship between the 5th and 7th lords in Navamsa does not necessarily imply the converse or disappointment in love. And as Dr. Raman has always emphasized, no single factor or condition can over-rule what the chart read in its entirety shows.
Summing up, the Rasi is to be analysed first according to general principles of timing marriage. This would sometimes be fairly clear in terms of Dasa and Bhukti. But in some cases, where such Dasa and Bhukti pass without producing the anticipated event of marriage or where such periods do not seem to be sufficiently qualified to show marriage, the Navamsa chart is to be taken up. In such cases, the indications for marriage get strengthened in the Bhuktis of the following factors in the Navamsa.
a)The planet in Shashtashtaka (6-8) position with Dasa lord.
b)The rising Navamsa lord
c)The setting Navamsa lord
d)Atmakaraka (Jaimini)
e)The planet in Karakamsa
Such an approach combining the Rasi and Navamsa indication judiciously gives a fairly accurate period for marriage especially in cases where it has been elusive.
Courtesy: Modern Astrology
Continued from: Timing Marriage from Navamsa Clues – Part I