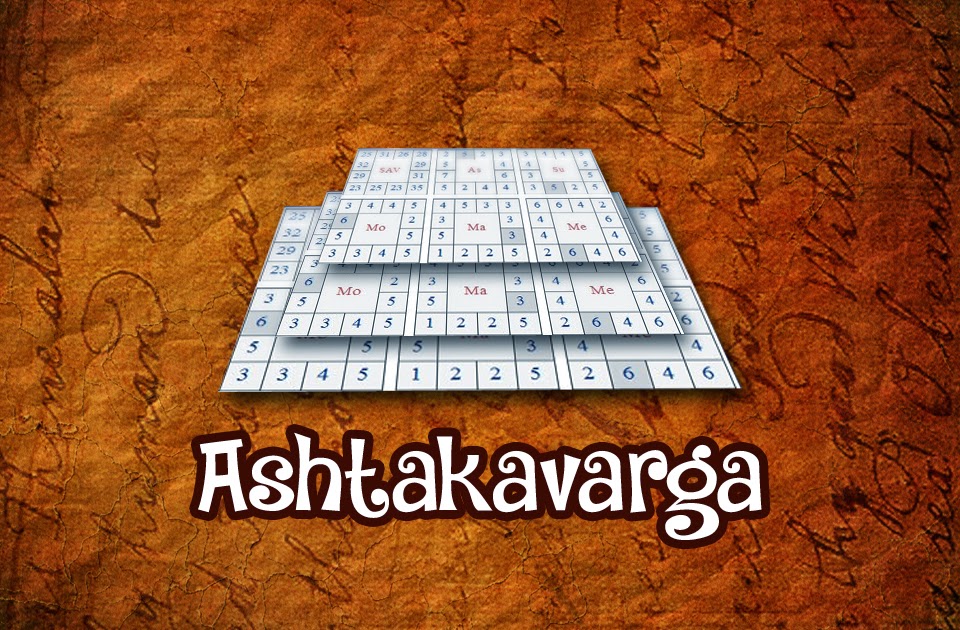 Parashara Muni (The father of Vedic Astrology) explains 32 types of Dasha Apaharas. Even sages have found difficulty in judging which of the dasha systems are to apply in a given situation. Therefore, they devised the scheme of Ashtakavarga to make predictions for a person as per Dasha and Transits (Gochara) in the horoscope. Some particular position from the ascendant and sign occupied by the planets are considered beneficial. The seven planets from Sun to Saturn and the ascendant together determine the beneficial and bad effects. Since the effects are determined dependent on eight references, it is called Ashtakavarga.

The good and bad effects are decided from the ascendant and the signs of planets. It helps to make predictions in three different types:
There is one more peculiarity to it. The strength of the eight planets joins together and thus creates a combined strength. It is yet another reason behind the name.
Sun’s Ashtakavarga implies the total effect of seven planets including Sun and the ascendant transmitting their strength in every sign. In this way, there are separate Vargas for all the 7 planets. In each of these 8 Vargas the points for 7 planets and the ascendant are present.
The Ashtakavarga gives clues regarding the auspicious and inauspicious aspects in one’s longevity, luck, welfare, education, spouse, actions, wealth, expenditure, loss, etc.
The Ashtakavarga is estimated on the basis of the Bhava situation of a horoscope. It is calculated from the sign that the planet occupies. For example, the Vargas of Sun is calculated from the sign that Sun occupies, of Moon from the sign in which Moon is located and so on.
For this purpose, the zodiac is drawn for each planet and Sun is recorded as ‘Ra’, Moon as ‘Cha’, for Mars ‘Ku’, Mercury as ‘Bu’, Jupiter as ‘Gu’,Venus as ‘Shu’ and Saturn as ‘Sa’. The ascendant is always marked as ‘La’. Finally, calculate the number of letters in each sign and write that number down in that sign. These numbers form the Ashtakavarga of that particular planet.

Next        –  Birthstone and its Effects as per Vedic Astrology