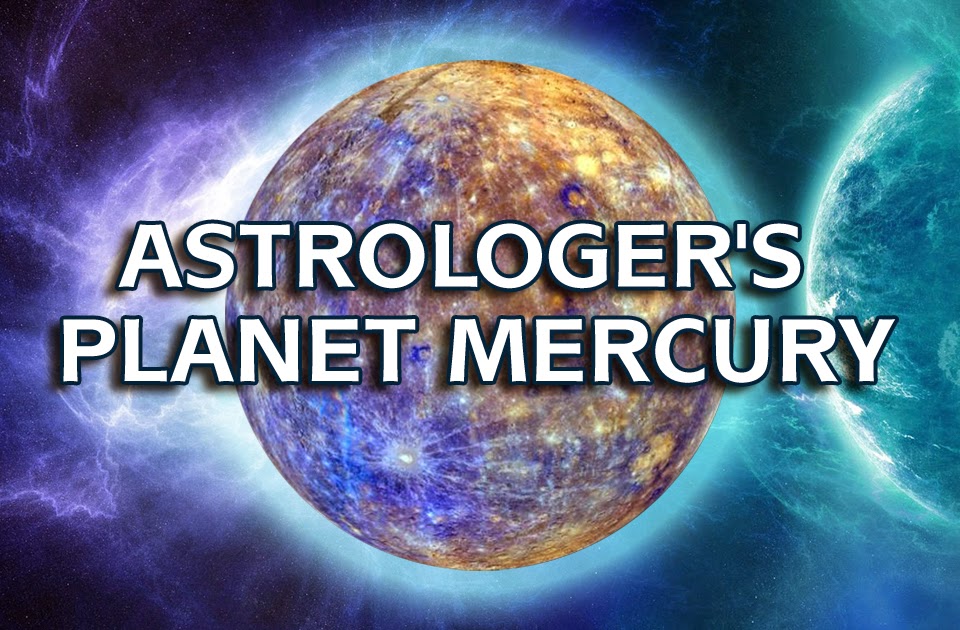 MERCURY is the nearest planet to the Sun and is never more than 28° away from him. Mercury rules Gemini and Virgo signs of the Zodiac.His highest exaltation is at 15° Virgo and deep debilitation at 15° Pisces. A strong Mercury makes the native youthful, active, intelligent, versatile and analytical. He has quick grasping power, good memory, impressive speech, good writing skills and an aptitude for the occult sciences. The Sun and Venus are friends of Mercury, Mars, Jupiter and Saturn are neutral; and the Moon is inimical to him. Being a mild planet, Mercury absorbs the qualities of the planet he associates with.
Budha-Aditya Yoga gives best result when it forms in Aries, Gemini, Leo, Virgo or Sagittarius in a benefic house. When this Yoga is formed in Gemini or Virgo in a Kendra, Mercury also forms the highly auspicious Bhadra Panchamahapurusha Yoga. According to Phaladeepika (Ch. Vi.2): “The native born with Bhadra Yoga will have long life, sharp intellect, is honest, praised by the learned, a leader of men, rich and impressive while addressing an assembly.”
The Ascendant is the pivot of the horoscope. The strength of the Ascendant lord, the house occupied by him and the nature and lordship of planet(s) located in or aspecting the Ascendant influence the personality of the individual. The 2nd house relates to speech and wealth. The 3rd house (being the 8th from the 8th) relates to longevity and study of occult subjects as well. The 4th house indicates mental strength and the 5th house shows dhi (wisdom),
Mercury is an exception and not considered combust in close proximity to the Sun. The conjunction of the Sun and Mercury forms Budha-Aditya Yoga. As Mercury is never more than 28° away from the Sun, this Yoga is quite commonly found. However, it is only when the two are strong and benefic to the Ascendant that the Yoga makes the native intelligent, learned, logical, a matheratician, astrologer, scientist, lecturer, counselor or lawyer.
Sruti (Vedic learning) and foresight (knowledge of future). The 9th house relates to higher knowledge and religious pursuits. The 10th house relates to Karma (occupation), status and satkirti (good reputation). The 10th house is also called worn (zenith or sky) and relates to anything beyond this world or the supernatural.
A strong 2nd house (5th from 10th) shows knowledge of super natural matters. The lord of the 2nd house of the Zodiac is Venus and of the 10th, Saturn. Hence, the relationship between Venus and Saturn in the horoscope becomes vital for a successful astrologer. The 11th house stands for prapti (gain), siddhi (fulfillment) and vaihhava (prosperity). It is an established astrological tenet that the house occupied by the 11th lord flourishes (Phaladeepika, XVI, 29). The 11th and 3rd houses, being Upachaya are inter-related. The location of the 11th lord in the 3rd gives good purushartha (enterprise) for attaining knowledge. The 11th house is also the 9th (higher intuitive faculty) from the 3rd house. The 11th lord in the 3rd or aspecting the 3rd makes the native proficient in occult studies.
Combinations for Proficiency
Here are some planetary combinations for making one proficient in astrology.
According to Bhavartha Ratnakar (Chap. 2, Education):

If Mercury is in the 4th house, the person becomes proficient in Astrology.

If the Sun. Mercury and Rahu he in the 5th house, the native becomes learned in astrology.

The person becomes well versed in astrology if the Sun and Mercury in his horoscope are in 2nd house. He becomes a mathematician if this combination is aspected by Saturn.
According to Sarvartha Chintamani,

If Mercury is in a Kendra. the lord of 2nd house is strong and Venus is located in the 2nd or 3rd house with a benefic; or if Venus is in exaltation in the 2nd house, the native becomes the foremost among the astrologers.
The 6th, 8th and 12th houses are called ‘hidden’ houses. The 8th and 12th houses deal with extra-sensory perceptions and play an important role in the horoscopes of astrologers and mystics. The lord of the 5th in 10th would be in the 6th from the 5th; and the location of the 10th lord in the 5th would mean he is in the 8th from the 10th. The lord of 10th in the 9th is again in the 12th from the 10th. Such planetary positions in Navamsa as well indicate that the native will be drawn to the study of astrology.
Further,

If the lord of 2nd is the Sun or Mars and is aspected by Jupiter and Venus and Mercury is in Parvatamsa (strong in the same sign in 6 Vargas, the native knows the rationale of astrology.
Brihat Parasara Hora Sastra (Chap 9, Sloka 91) also states: If Ketu occupies the Ascendant, the 5th. 9th or the Karakamsa. the native becomes an expert in mathematics and astrology.
Among the planets, Jupiter represents Gnana (Divine knowledge), prosperity, status and fame in life. Mercury represents knowledge, grasping power and prompt decision-making. Strong Mercury gives mathematical ability which forms the basis of astrological calculations. The role of Mercury in making the native a proficient astrologer is quite important. Mars shows energy, sharpness and logic. The Sun is the source of all knowledge and confers name, fame and status to the native. Saturn gives perseverance, patience, and a research-oriented mind. A strong and unaffilicted Saturn means more happiness and less misery in life. The strength and association of these planets with the Ascendant and the Ascendant lord gives proficiency in astrology.
Importance of Intuition
The capacity to understand and foretell the future is governed by the 5th house (9th from 9th). It also shows gains from the public (being 2nd from 4th – public). The 10th relates to profession. Any connection of Jupiter with the Ascendant and its lord gives intuitive power to the native. In addition, if the Ascendant and its lord have a connection with the 4th and 12th houses and their lords, it indicates that the native earns from the public (4th house), by deciphering their prospects in future, as the 12th house is the 9th from the 4th.
Among the trans-Saturn planets, Uranus (Herschel) is regarded as the planet of research occult sciences and intuition. It is considered as the higher octave of Mercury. When Uranus is in the Ascendant or a trine, it indicates that the native is endowed with remarkable originality, intuition and wonderful prophetic powers. When the Sun or the Moon, Jupiter or Mercury has any connection with Uranus, it endows the native with good intuitive power.
Though the guiding principles of astrology can be learnt like any other subject, the truth and veracity of prediction made by an astrologer depends on intuition. The faculty of intuition is inborn and is the result of subha karma (good deeds) of previous births. It can be further sharpened by leading a pious life. Astrologers par excellence with high intuition are born to uphold the Divine Science of Astrology which is evident from their horoscopes.
Chart 1: Prof. B. Suryanarain Rao: Born February 12, 1856 at 12h.21 m. at 12N28, 77E38. 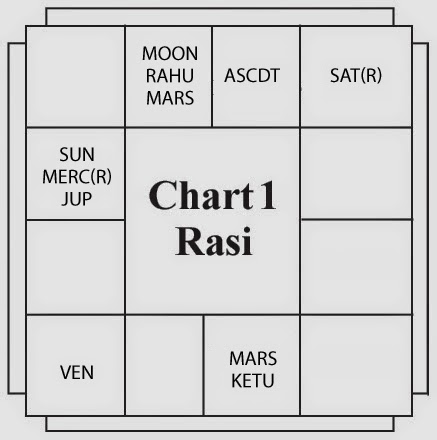 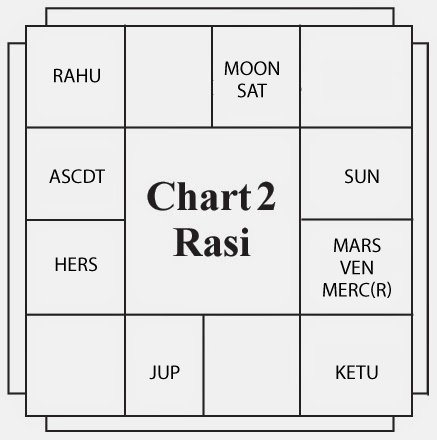 Chart 2: Dr. B.V. Raman: Born August 8, 1912 at 19h.15m. at 12N28, 77E38.
Prof. Suryanarain Rao (Chart l), a renowned astrologer of his time, translated many old classics into English and also wrote his own books. He started THE ASTROLOGICAL MAGAZINE and created public interest and awareness in astrology. The 4th lord Sun and the 5th lord Mercury in the 10th form Budha-Aditya Yoga conjoined with Jupiter. Yogakaraka Saturn in a friendly sign in the 2nd in exchange of signs with Mercury is aspected by the Ascendant lord Venus and Jupiter which gave him great proficiency in astrology.
Dr. Raman’s remarkable predictions brought him international fame. The Ascendant lord Saturn in Chart 2 is in the 4th in a friendly sign with the exalted Moon accepted by Jupiter, which made him studious and learned. The Ascendant lord Saturn aspects the Ascendant. Jupiter and the Moon form a strong Gajakesari Yoga. The 5th lord Mercury, the 9th lord Venus and the 10th lord Mars conjoin in the 7th and aspect the Ascendant. The 2nd and 11th lord Jupiter in the 2nd aspects Rahu in Pisces in the 2nd, the Ascendant lord Saturn in the 4th and the Sun in the 6th house. These favorable Jupiterian aspects, the strong Gajakesari Yoga and Ketu in the 8th (occult) made him a world famous savant.
The Ascendant lord Mercury in the 10th is a favorable disposition in Chart 3. It is aspected by Ketu and 11th lord Mars. The 3rd lord Sun is exalted in the 11th with Herschel and aspected by 11th lord Mars and Jupiter with the Moon in the 5th forming a Gajakesari Yoga. The 9th lord Saturn is in the 9th in his Moolatrikona sign aspected by the 10th lord Jupiter. The location of Ketu in the 2nd in the 10th from Jupiter and the Moon made him a successful astrologer and author of books on the subject.
The Ascendant lord Mercury is exalted in Virgo in the 4th forming Bhadra Panchamahapuusha Yoga in Chart 4. Mercury also forms a Budha- Aditya Yoga. The 10th lord Jupiter is in the Ascendant and aspects the 5th and 9th house, with the 9th lord Saturn in the 9th. Ketu is in the 8th house. The 9th lord Saturn aspects the 5th lord Venus. Herschel in the 7th house aspects Jupiter and Moon. The 11th lord Mars in the 3rd in a friendly sign made him logical. Strong Mercury, Saturn and Jupiter shaped his career. He was associated with the starting of the Rashtriya Panchang during his service in the Central Meteorological Department. He started publishing his own ephemeries Laluri’s Ephemeries after his retirement.
Courtesy: MODERN ASTROLOGY (Author : Sita Ram Singh, M.A., LL.M.)