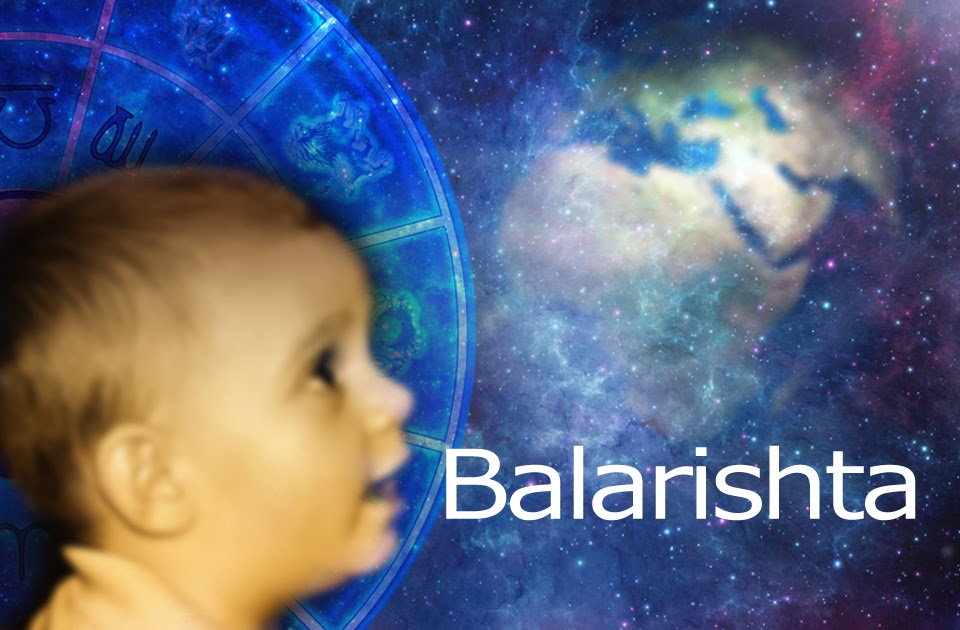 In vedic Astrology, Balarishta indicates misfortune that befalls a native during the childhood. The word ‘arishta’ means an affliction and there can be certain combinations in the horoscope chart suggesting ill health at the earlier stage of life. Such combinations referred as balarishta, must be known from the horoscope for the well being of the child.

Balarishta doesn’t necessarily indicate death, but its presence or absence in horoscope should be given prominence. While assessing a child’s birth chart, the possibilities for balarishta and its intensity should be clearly evaluated before pronouncing the benefic yogas or favourable dasas. Recognition of such malefic combinations helps in being more cautious in the health issues of child and to take preventive and remedial measures. Chances of death occur only if the affliction is intense and the protective factors within the horoscope are inadequate.
The ancient vedic astrologers, owing to some reasons that horoscope doesn’t easily reveal, are of the opinion that it is difficult to forecast the progress of life up to the age of 12. During this period a child can suffer for the reasons beyond the ambit of his/her birth chart. It is said that during 12 years span after birth, a child’s suffering in the first 4 years is the result of his/her mother’s papakarma (sins). In the next 4 years (age 4 –age 8) the child may suffer of the papakarma of his/her father and for the last 4 years (age 8 – age 12) the child may suffer of his/her own past papakarma (sins of last incarnation).
The vedic astrology recognizes the law of inter related destiny. The ill health or death during the first 8 years of life could be a result of karmas of parents. The destinies of people belonging to a group or family are inter-related. The actions of parents and other near and dear can affect the child considerably. Apart from the past deeds of mother and father, the deeds of past generations from maternal and paternal side can also influence the events in early childhood. Hence, the prediction of life, till the age of 12, just by seeing native’s horoscope, is considered difficult. But the horoscope can help in knowing the possibilities for balarishta and in taking adequate measures to alleviate the ill effects.
The hope of nullifying the effect of balarishta can be found within the horoscope of child, and is called Arishta -Bhanga. It refers to all those combinations that cancels or alleviates the effects of balarishta. The presence of Arishta-bhanga in a horoscope reduces the bad effects of balarishta. There are numerous astrological combinations indicating arishta-bhanga and the most important ones are the following.
The position of moon in horoscope chart is very important in the health of a new born baby. If the moon is in a prominent position or it is making a strong influence, the effects of balarishta will be lessened. An ill positioned moon is a factor causing balarishta and its bad effect can be reduced by strengthening or invoking the benefic influence of moon. Wearing silver or pearl studded jewelry is a practice to bring up the positive influence of moon.
The strength of lagna is a major factor influencing the health of child. If lagna lord is strong (in own house or in exalted position) it indicates good health and weakens balarishta. A weak lagna is a cause for balarishta which may also result from the drishti of malefic planets (Sun, Mars, Saturn, Rahu or Kethu). Its ill effects on the child’s health can be reduced by strengthening the influence of lagna lord. Observing specific rituals and wearing relevant gem stones can strengthen the influence of lagna lord.
Drishti of benefic planets is a strong factor for arishta bhanga. When benefic planets (Venus, Jupiter, Moon with pakshabala or non-malefic Mercury) occupies 4th, 7th or 10th house from lagna, it indicates good health and effects of balarishta will be reduced.