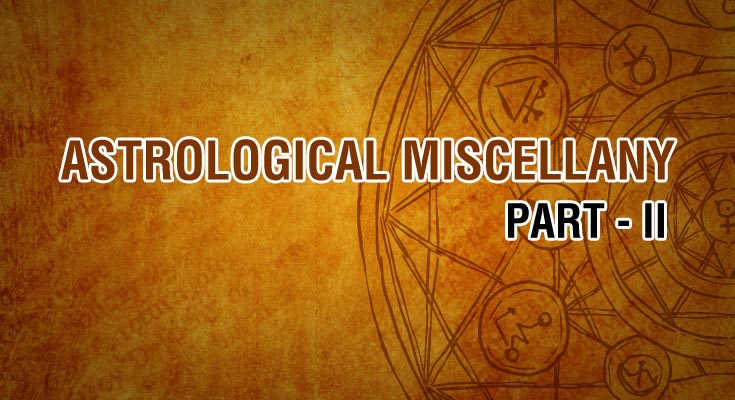 Kuja Dosha is an important factor that needs to be carefully balanced in finalizing a marital match. It is said to occur when Kuja or Mars is in the Ascendant, the 2nd, the 4th, the 7th, the 8 the or the 12th houses from the Ascendant, Moon or Venus. It is seen that the Dosha is more severe when it occurs in the 7th and 8th houses than when it takes place in the 2nd, 4th or 12th house or even the 1st house. However, its gravity can vary based on several factors of which its signs of occupation can also matter.

Reader Soumitra Chatterjee raises a few pertinent questions on Kuja Dosha when he writes: “Previously what I heard was that a Kuja Dosha or Mangalik chart should be paired with another Mangalik only and that was sufficient to okay the match. But in your book on Kuja Dosha, you specifically mention that a 7th and 8th house Mars should be handled carefully and paired only with a 7th or 8th house Mars. This sounds reasonable enough. But my question is when there is Mars in the 2nd especially for Sagittarius Ascendant where Mars would be exalted and powerful, for Libra Lagna where Mars in Scorpio would be in own house and so, very powerful and for Pisces Ascendant where Mars in the 2nd would be in his Moolatrikona sign, would these special situations of a 2nd house Mars admit of being paired with a 7th or 8th house Mars if, other factors like longevity, psychological factors, extra-marital affair factors, Dosha Samyam, Rasi Kuta agreement, and Mahendra, Stree-dheergam are satisfactory.

“Regarding Nadi Kuta, it said the same Nadi charts cannot be paired. But I have seen lots of couples with the same Nadi, being happy. Do we need to give any importance to Nadi Kuta when longevity, the 5th house, and Jupiter for both are strong.”

Though the same Nadi for both of a couple is not approved, the Nadi factor is not a decisive criterion in approving or rejecting a match. Its relevance lies in cases where the 5th house is afflicted and indicative of difficulty in getting progeny. When Nadi Kuta, in such cases is absent (same Nadi for both), it only aggravates the affliction and chances of getting progeny being further weakened. According to Hyderabad reader Bhanumati: “The Ascendant is not strong as made out by the native. It is afflicted by the Rahu-Ketu axis and is aspected by natural malefic Saturn from the 11th house, rendering it weak. The Ascendant lord Mercury appears to be strong due to his placement in the 10th (which is his own house). However, his strength is decreased by conjunction with the Sun who is a natural malefic and the 12th lord.

To learn more about Rahu-Ketu axis

“The 9th lord ruling higher studies, Venus, is in the 8th house with the 8th lord Mars and aspected by Saturn which explains the native’s discontinuance of studies. The 10th lord (for career) is Mercury. Although placed in his own sign, he is in the Nakshatra Mrigasira of 8th lord Mars which makes the native switch professions and jobs. His marriage was on the rocks due to Jupiter (7th lord) being in the 8th lord’s Nakshatra Mrigasira. Also, the 7th house is afflicted by the Rahu-Ketu axis. There is no benefit- aspect at all on the 7th house.

“The native is not able to get any income because Dhanadhipati (2nd lord) Venus and Labhadhipati (11th lord) Moon are in Shahtashtaka from each other.

“According to Lahiri Ayanamsa, the 8th lord Mars is with Rahu in Navamsa which is a big drawback. Finally, wherever the 8th lord or his Nakshatra is involved, the native is not able to make any progress. “The native’s current Dasa of is Jupiter. Mercury Bhukti has just started and runs until the end of 2020. The native has chances of getting a job during Mercury Bhukti and may get remarried when Ketu Bhukti starts in 2020.”

A careful look at the chart shows that the unstable circumstances in both personal and vocational life of reader Pradeep have been in Rahu Dasa. Rahu, no doubt, is well placed in Virgo but being in Chitta Nakshatra, ruled by the 8th lord Mars who is firmly entrenched in the 8th house with 9th lord Venus, who in turn, is in the 12th or Vyayastana of Bhagyastana, have resulted in much frustration. At the same time, transit Saturn was bringing the chart under sade-sathe which has now ended.

The Dasa of Jupiter is on and Jupiter is the Atmakaraka. Jupiter is the 7th lord but well- placed in the 9th house or Bhagyastana but again in the 8th lord Mars’ Nakshatra Mrigasira. However, the Dasa lord Jupiter’s disposition in a trine cannot go waste and should bring in some order in both personal and career matters. The Bhukti of Mercury is running now and Mercury is well-placed in the 10th house which should help the reader’s job profile improve.

The Dasa is of Jupiter while the Bhukti is of Mercury. Jupiter is in the 4th house in Sagittarius in Dasamsa and Mercury is the Dasamsa Ascendant lord. Hence, there can be a re-orientation in his career profile, possibly to traditional subjects such as astrology. The reader could look for other avenues with better success rate now but he can also explore the option of building slowly a career in astrology.

Mars is in the 8th house with Venus and produces strong Dosha from all three centres— Ascendant, Moon-sign and Kalatrakaraka Venus. The 11th lord Moon is in the Ascendant respecting the 7th house, a common sign, from another common sign. Hence, marriage can occur in Ketu Bhukti ( May 2020 to April 20121) but care must be exercised to check on the Kuja Dosha factor in the proposed bride’s chart. Briefly put, our reader can look forward to better times. 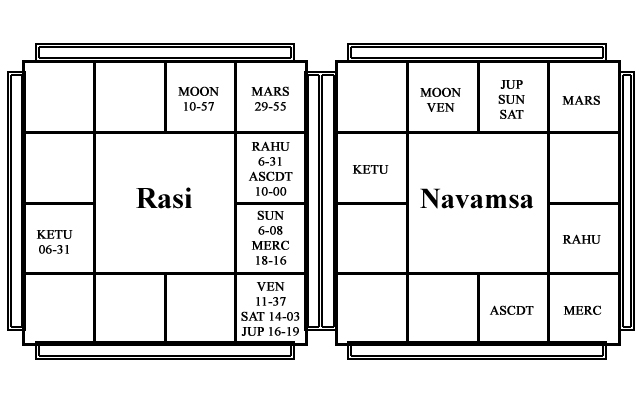 “A letter to the Editor (December ’18) on the transit of Saturn in the 8th from the Moon makes for interesting reading and reminds me of an interesting case in this context” emails reader Nandini Nallikai of Chennai.

“This native has the Moon in Rohini, Bhrigu Bindu in Sagittarius in Moola 3rd Pada and Jupiter Dasa, Saturn Bhukti running. Saturn transited the 64th Navamsa from the Moon (Moola 4th Pada) 3 times in 2018 between January 25th – March 2nd in direct motion, between June 5th – July 22nd in retrograde motion and again, between October 20th – November 27th in direct motion. Saturn transited his Bhrigu Bindu twice (and in fact was stationary over the Bindu in 2018). When Saturn transits these points/Navamsas, it is generally said to produce misery.

“In January 2018, when Saturn was transiting the Bhrigu Bindu for the first time, the native initiated a dispute with a lady who he had been talking to for marriage for a couple of years and behaved quite badly with her. This is in accordance with a malefic transiting Bhrigu Bindu. However, as Saturn went retrograde later in the year, the native met and got engaged to another young lady (Jan 27th, 2018) exactly during the period Saturn (R) was transiting the 64th Navamsa from the Moon and Bhrigu Bindu. He got married in a civil ceremony with the Hindu one to follow later but if you take the former as the actual marriage, the marriage occurred while direct Saturn was once again transiting the 64th Navamsa from the Moon in Moola-4.

“How does the transit of a malefic over two such sensitive points give such a big event to the native? I cannot accept the explanation that Saturn as the 7th lord can give the marriage alone because he is also the 8th lord or Randhradipati. How did this native see absolutely no effect of such a transit in the Bhukti of Saturn?

“The only possible explanations that I have are the lunar eclipse of July was on the native’s Ascendant and the 7th house and stationary Saturn were aspecting and activating natal Saturn. I too share your view that Jupiter and Rahu’s favorable transit cannot override Saturn’s effects. So this case is baffling.”

The reader obviously has overlooked the role of the Dasa and Bhukti in producing the event of marriage and considered only the transits. The Dasa was of the 9th lord Jupiter who is with the 7th lord Saturn and Kalatrakaraka Venus and aspecting the 7th house and therefore, preeminently qualified to bring about marriage. The Bhukti likewise was of the 7th lord placed in the 3rd but with 9th lord Jupiter and Kalatrakaraka Venus. Saturn, no doubt is the 8th lord but that does not snatch away his 7th lordship. Saturn gets fully qualified to bring about marriage, though as the 8th lord, he has delayed it. As regards ashtama sani or the transit of Saturn in the 8th from the Moon, it did show as the first proposal not coming through. The same factor can also show adjustment or like issues in the marriage during the period of ashtama sani.