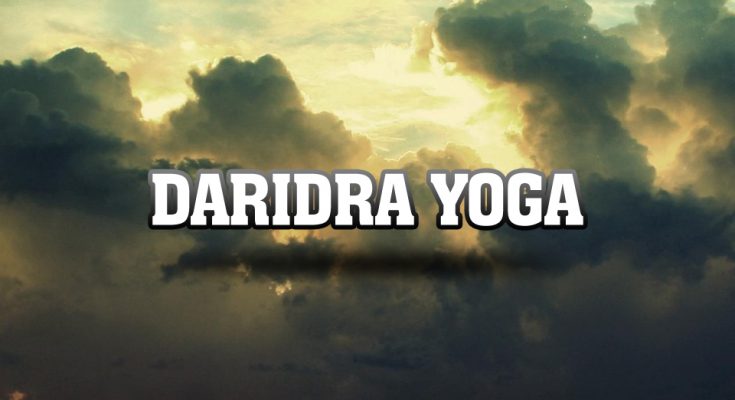 Daridra Yoga, as the name indicates, this is an unfavourable planetary combination for lack of financial stability. In this yog, the 11th house is studied. The 11th house is known as Labha-sthan. This house deals with income, prosperity, gains, profit, friends, elder brother or sister, hopes and aspirations and their fulfilment.
You have to study the 11th house carefully. The condition for the Daridra Yogam is 11th lord should be in any of the dursthana house. The dursthana houses are 6th, 8th and 12th. When the lord of the profits, hopes, and gains are in the evil houses, obviously you have to face some setbacks in getting accumulated money. You have to do a retrospect when you see this situation.
This yoga doesn’t mean that you will be a beggar. This yoga indicates the difficulties in amassing wealth. This can lead you to a situation where you can find obstacles in making and saving money. At the same time, such obstacles are seen to have gotten diminished in the latter half of life. You should not forget that the 11th house is also known as the Upachaya house. Upachaya house means, the matters allotted to that house will progress according to the time. So, you have to lay a foundation set.

All will have difficulties in saving money, but Daridra Yoga means you have to be extra careful in dealing with this yoga. You have to control your expenditure, block all the evil friendships, and habits. You may have to even go to a financial awareness program.

The good or bad effects of Daridra Yog are felt during the adverse dashas or planetary periods of the afflicted lords of wealth and gains, and certain Daridra Yog starts from birth till death.

The intensity of the yoga is based on the aspects, placements and conjunctions also. So this yoga has to be read on the basis of these. There are so many other planetary combinations are shown in the net for Daridra Yoga, but the true combination of Daridra Yogam is when your 11th lord is in 6th, 8th or 12th.