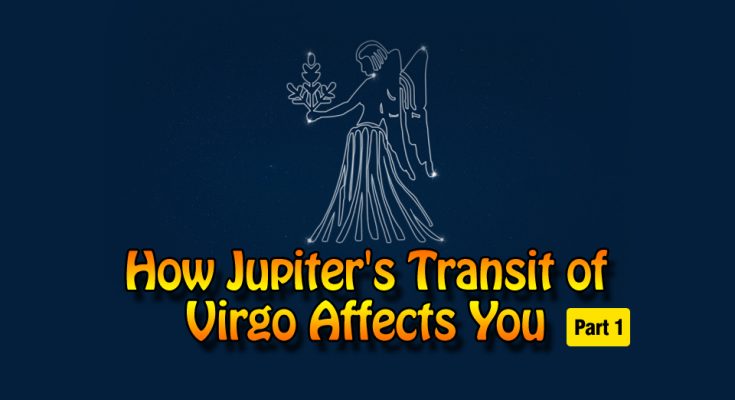 Jupiter enters Virgo on 4th August 2016 Where he remains till 4th September 2017. In between, he enters Libra on 19th January 2017 where he becomes retrograde on 7th February re-entering Virgo on 24th February. Jupiter resumes direct motion in Virgo on 10th June 2017 and moves forward to enter Libra finally on 4th September 2017.
Jupiter deemed to be in Virgo for an overall period of 13 months spends about one month and 6 days in Libra in a temporary foray between 19th January 2017 and 24th February 2017. Thus, actually, Jupiter will remain in Virgo for just 6 days less than a year.

During this entire period of Jupiter in Virgo from 4th August 2016 to 4th September 2017, Saturn will be in Scorpio until 12th January 2017 when he moves into Sagittarius where he remains until 12th July 2017. Then re-entering Scorpio in retrograde motion,  he remains there during the rest of the period of Jupiter’s stay in Virgo. Rahu and Ketu will remain in Leo and Aquarius during this entire period.

The favorability rating for Jupiter has been assessed taking into consideration the conventional and Moorthi Nirnaya yardsticks. As a result of the transit of Jupiter, good or bad, can be influenced by the concurrent movements of Saturn, Rahu and Ketu, they have also been considered, inclusive of their Moorthi Nirnaya effects. these have been taken into account in assessing the overall percentage of favourable results of the transit of Jupiter.

In judging the general results, the interim foray of Jupiter into Libra between 19th January 2017 and 24th February 2017 has not been considered for Moorthy Nirnaya computations, as the effect can only be negligible but has been reckoned in the evaluation of results.

Apart from the transit effects of Saturn, Rahu and Ketu during the period, the results will subject to improvement or deterioration of the existing influences of other planets as well. the results are likely to get modified in accordance with the running directions, good or bad, of the natives. In short, the predictions given need a balanced overview based on these various influences.
The transit of Jupiter in Janma(1) and Naidhana or Vadha (7) Nakshatras from Janma Nakshatra will be very bad for it. The transits in Vipat (3) and Pratyak (5), though also bad, will bring only lesser harm. however, Jupiter transiting the Parama Mitra Tar(9) form JanmaNakshatra can bring very good results, the transits in Sampat (2) Sadhana (6), Mitra (8)and Kshema(4) Nakshatras can give good results. The general results given must be evaluated only after suitably modifying them to suit the above – mentioned grading for the Janma Nakshatra of an individual.
Mesha (Aries):- Aswini, Bharani, Krittika (1)
Analysis: Unfavorable Jupiter in the 6th till 19th January 2017 and from 24th February 2017 to 4th September 2017 comes under check from l8th August to 20th October in 20l6. Throughout this transit of Jupiter, Saturn and Rahu will remain unfavourable and Ketu, favourable. Domestic happiness can fade and problems and worries make you restless resulting in utter lack of mental peace. At every stage, you meet with obstacles, failures and losses. You also tend to get embroiled in unnecessary disputes. Expenditure can overshoot income.
You could meet with impediments to work. If holding an executive position. Some of your intelligent decisions could get downgraded. However, for a short spell between mid – January and mid – February 2017, some of your desires can get fulfilled. Help will be available when needed and friendship with those with authority will prove useful.
Women may feel dejected over even trifles. If a student, this period will be tough and only persevering hard work can save your grades.

Vrishabha (Taurus):- Krittika (2,3,4), Rohini, Mrigasira (1,2)
Analysis: Favorable Jupiter in the 5th till 19th January 2017 and from 24th February 2017 to 4th September 2017 comes under check till 19th January 2017 and again, after 24th January 2017. Saturn and Rahu will remain unfavourable and Ketu favourable during this transit of Jupiter. You will be happy with auspicious events in the family. You may get a higher position and association of refined and cultured people. Business rivals who have been troubling you may fade away. Marriages, which are due take off now. Birth of a child in the family can be expected. You could benefit from favours from those in power.
Love relations come under bright stars and many of you could walk to the altar. However, for a short spell in January – February 2017 domestic happiness can fade due to anxieties or disputes with some disappointments and obstructions to your plans. Expenditure can go up and even overshoot income.
Acquisition of a vehicle is indicated. Many of you may shift to a new house. For students, there will be many opportunities for adding to your knowledge in your subject of specialization. Those into research projects see fast progress.