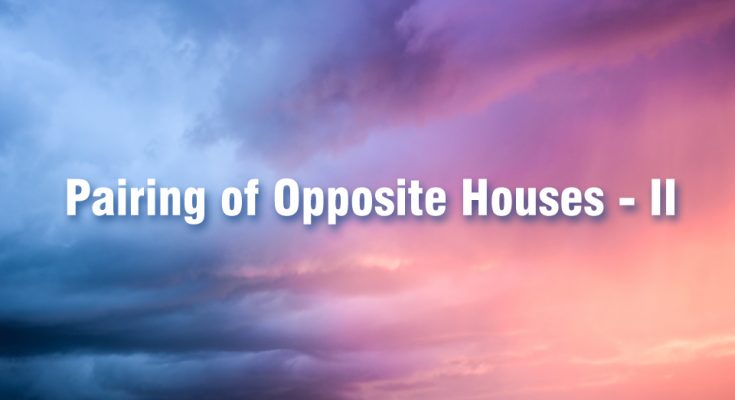 The Ascendant and 7th house signify the native and one’s spouse respectively and all about the relationship between the couple. The 7th house also connotes the nature of the interaction of the native with other associates or business partners in daily life in various capacities such as a teacher-student, employer-employee etc. 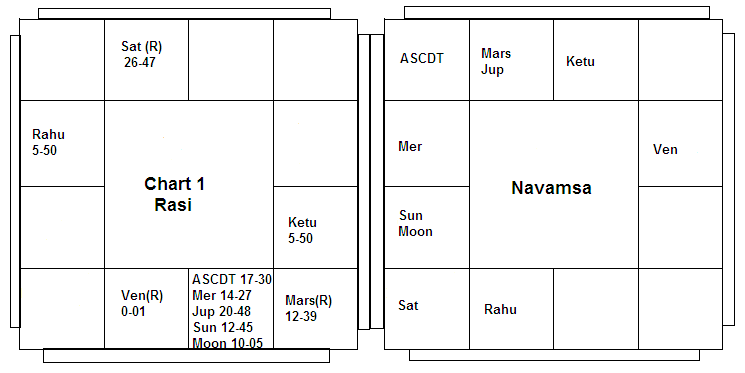 At a subtler spiritual level, the Ascendant signifies the creation of an egoistic self in the material world for the fructification of its Karmic influences and the 7th house connotes the role of one’s inner-self (commonly known as alter ego) in shaping the destiny in store for one. Accordingly, one’s spouse is generally considered to be one’s complementary half, without whose regenerative and transformational influence the individual’s life is deemed to be incomplete in the material plane. That is why in Hindu tradition “marriage is considered to be the sacred bond which is supposed to last for many lives”. The concept of Ardhanareshwara epitomizes this bond between the dual facets of human existence as man and woman.

The Ascendant is Libra whose lord Venus is retrograde in the 2nd house (Kutumbastana). The Ascendant is occupied by Jupiter (3rd and 6th lord), Mercury (9th and 12th lord), Sun (11th lord) and the Moon (10th lord). Saturn, the lord of the 4th (Sukhastana) and 5th (Putrastana), is in the 7th with Digbala in his sign of debilitation but retrograde. As such, he gets the strength of an exalted planet as per Uttarakalamrita (Chap.2, Sloka 6). The 7th lord Mars is in the 12th and is retrograde aspecting the 6th and 7th houses. Rahu is in the 5th and works as the agent of Saturn. Ketu is in the 11th and acts as the agent of the Sun, his sign-dispositor. Thus, the influence of all the planets in the chart is centered around the Ascendant and the 7th house in a predominant manner. This implies that for this native, marriage and married life are of prime importance as all spheres of activity but her life are centred around her own self and her spouse. Metaphysically, the position of the Sun (soul), Moon (body and present life) and Jupiter (Jeeva) in the Ascendant and their collective aspect on 7th house indicates that this is a classic example of a native destined to find the mission and meaning of her present life.

The Yogakaraka Saturn despite being in his sign of debilitation (Aries) creates a Neechabhanga Raja Yoga being in a Kendra from the both the Ascendant and the Moon. Mars (the lord of Saturn’s debilitation sign) aspects Saturn from 12th house which causes cancellation of debilitation. Saturn is retrograde in Neechastana and has Digbala which empowers him and enables him to offer fully the results which he has to deliver in the horoscope. Saturn’s strong placement in the 7th house, a lord of Sukhastana and Poorvapunyastana, and his aspect on the Ascendant, 4th (happiness) and 9th (luck and Prarabdha Karma) indicates that the native’s spouse in her present birth has a direct link to her Poorvapunya. Besides, the fact that there is an interlink between the 5th (love), 7th and 9th houses which guarantees not only very good growth in life after marriage but also appreciably intimate love towards husband and good attachment with her children.

Out of the four planets in the Ascendant, three are mutual friends (Sun, Moon and Jupiter) while the fourth, Mercury is in a friend’s sign.  Jupiter and Mercury possess Digbala in the Ascendant and they are supposed to do good to the native by warding off Doshas in the horoscope. The Badhaka Sun being weak in his sign of debilitation, the Badhaka effect is reduced. Being born on a New Moon Day, the moon is considered as malefic. Malefic Moon as the lord of a Kendra (10th). In the Ascendant is also good. Saturn, being the Yogakaraka, his influence on Ascendant is benefic. As a result. the native is endowed with the skills and tendencies (4th and 5th houses and Mercury) required to get adopted to the environment of the husband after her marriage . Though married at an early age when just about 19 years, the native involved herself in discharging her duties towards her ailing mother-in-law taking very good care (Moon ) of her and managing all house-hold chores very well. She has excelled as a house- wife getting applause from all her relatives for her good work because of the influence of Jupiter  on the Ascendant as the lord of 3rd house (effort) and 6th houses (services).

But, despite the Yogakaraka aspect of Saturn on the Ascendant being benefic and not withstanding the fact that the native gets happiness (4th) and love (5th) from her husband (Yogakaraka placed in 7th), the mutual aspect of planets in the Ascendant and 7th being inimical ( except of Mercury), there always would exist a certain amount of discord in the relationship between the couple. Out of the five planets in the 1-7 axis, Mercury and Jupiter have Digbala as also Saturn. As these planets are endowed with additional strength it induces a feeling of maintaining self-respect even with the spouse and a sort of egoistic approach in their mutual interactions. Consequently, both partners have the habit of sticking to their guns over any issue which results in frequent bickerings between them, often on flimsy grounds, especially due to speech and matters of food (Ascendant lord Venus retrograde in 2nd) and expenditure and comfort (7th lord Mars retrograde in 12th).

The egoistic nature of the couple is accentuated by both Libra and Aries being odd signs and masculine in nature which fuels a sort of repulsion during any discussion between them and frequently attempts to destabilize their intimacy. But the mutually friendly aspect of Saturn and Mercury (9th lord) works as a saving grace and finally brings about an agreeable consensus. Also, the native’s Ascendant Libra is ruled by the element air while that of her 7th house (spouse) is fire (Aries). Fire and air being friendly in nature, inspiteof marked differences in their basic approaches to life, one is capable of supporting the other and eventually, each quarrel creates a better understanding and a closer level of intimacy between them instead of discord or dissatisfaction.

In Navamsa also, both the Ascendant and 7th house are unafflicted which means that the relationship between the couple would be a normal one without any significant adverse influence.

The strong aspect of Yogakaraka Saturn from the 7th on the Ascendant (self), 4th (Sukha) and 9th (Bhagya) and the aspect of the 7th lord Mars on the 7th augurs well for the native and fosters good understanding between the couple. Even though there would be repeated bickering between them, the native would not take them seriously and hence married life would continue without any serious issues and the saying.”All is well that ends well” applies to the native who would finally feel good in her relationship with her spouse.

The general pattern of interaction of the native with others would also be usually good due the predominance of more benefic influences on the 7th house. Yet, the native would prefer to maintain her association well with only those who respond favorably to her point of view and respect her sentiments rather than with others who either contradict her or try to outsmart her.

Thus, it could be seen that when the Ascendant and 7th house are analysed as a pair instead of as individual ones, one gets deeper insights into the related areas. pairing of houses is essential in prediction for improved accuracy.

Important Points
While analyzing the pairs of opposite houses the following points need to be borne in mind:-

(a) The mutual aspects of plans posited in opposite houses create mutually supportive or  agreeable results or detrimental influential depending  upon the relationship between the concerned planets. If mutually friendly planets are involved, the results would be favourable to the native while inimical disposition of planets would cause inauspicious results.

(b) Even in the case of a single planets posited on a house which is vacant, such an aspect yields very significant  results.

(c) The presence of  multiple opposing influences involving many houses in a chart indicates a life of many ups and  downs.

(d) Absence of any opposition means that the native would not attempt to assess or try to evaluate the consequences before acting upon situations encountered by him concerning those houses.

(e) Generally, opposition enables one to see the other side of any issue. Hence the individual in whose nativity there are no opposing pairs of houses may not be open to others viewpoint or may be less inclines to confront people face-to-face and would prefer to meet problems indirectly.

(f) In charts with opposing influences involving certain houses, at a given moment of time both the houses are at work simultaneously and as a result, a synergic force of both the houses would be felt.

(g) If planetary conjunctions or multiple aspects are involved in either one or both the opposite houses, the results of such houses would generally be very important and need to be probed with extra caution.

(h) The impact of opposite houses is more about compromise, co-operation or confrontation, as the case may be, in respect of the results of the concerned houses which are specific to attendant conditions in a particular horoscope.

Courtesy: Modern Astrology(Dr. Revathi Vee Kumar)
Continued from: Pairing Of Opposite Houses – I