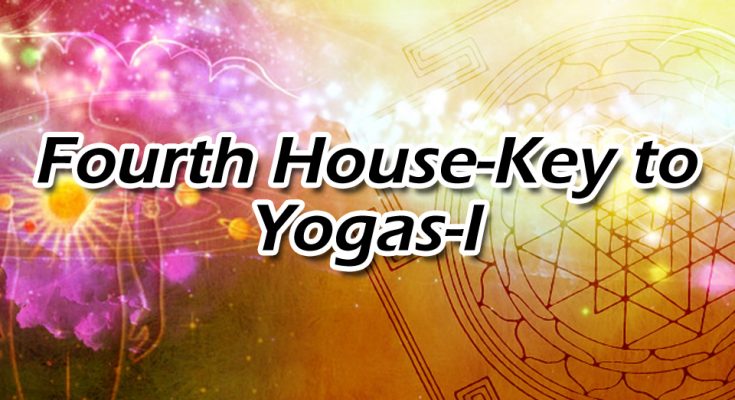 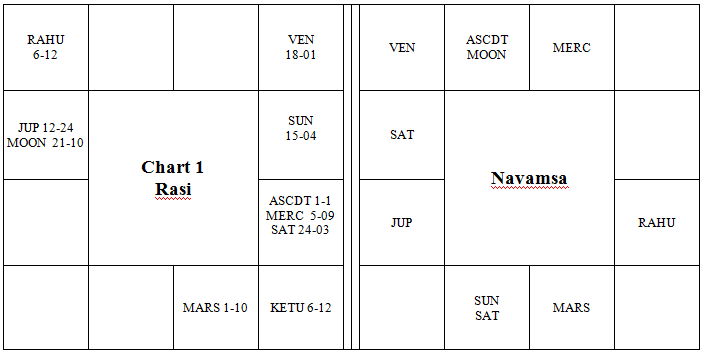 Chart 1 is of a woman politician who was elected as Member of Parliament for one term in the last Lok Sabha. She lost in the elections subsequently though. She was also elected as a Member of the Legislative Assembly earlier. Interestingly, both times she won from the constituency which she did not actually belong to nor was she born and brought-up there. She had settled in this place following her marriage where she never expected destiny would bring her such a great fortune. Look at her 9th and 4th houses whose lord Mars aspects the 9th which happens to be his own sign. The 4th lord aspecting the house of luck would naturally bring luck to the 4th Bhava. In the Parakramastana or the 3rd house, Mars gives courage and thrust to push ahead. Here Saturn in Leo in the Ascendant aspecting his own sign on the 7th house strengthens political prospects as the 7th indicates professional alliances also apart from the marital. Saturn’s 3rd house aspect on Mars is virtually nil because of a gap of 23° orb between them. We can convincingly conclude that but for Mars’ ownership of the 4th, the political prospects of the native would not have been as bright as they were. The 4th house being the house of popularity and fame, its lord aspecting the 9th would naturally result in materalizing the Bhava. The role of Saturn in a Kendra (as the lord of State and politics) with directional strength if considered from the Moon, in no way is undermined. All the same the 4th house retains its importance without afflictions which led to the progress of the native. She is currently the national president of the women’s wing of a national political party.
Chart 2: Male: Born September 22, 1967 at 12h. 50m. at 22 N 02, 82 E 33. (Ay: 23-24-08) 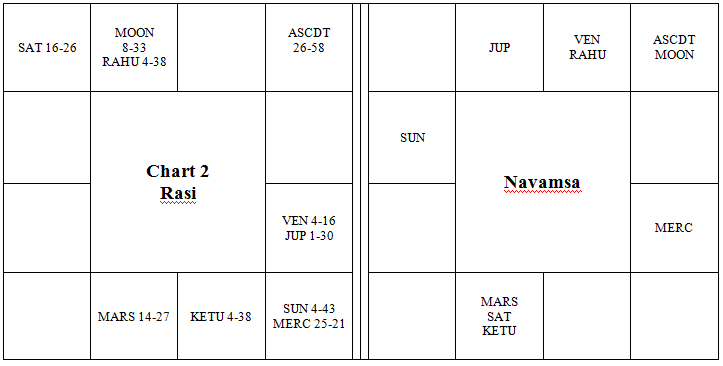 Chart 2 is of a Deputy Collector holding the seniormost post in State Service who resigned after a stint of barely 10 years only to try his luck in politics. His ambition has not seen the light of the day. Mercury, lord of the Ascendant, in the 4th house in exaltation took him to the topmost job in State service.
The lord of luck Saturn aspects the 4th where the Sun is posited with Mercury. The direct and malefic aspect of Saturn took its toll despite exalted Mercury who was not effective. The native is presently in a miserable state running into pecuniary problems. The point to be emphasized here is the affliction to the 4th and consequent problems.
Chart 3 is of a famous psychiatrist who has a roaring practice and who frequently travels abroad. Observe the placement of the 7th lord
Chart3: Male: Born August 15,1947, at 12h. 50m. at 22 N 03, 82 E 12. (Ay: 23-07-17) 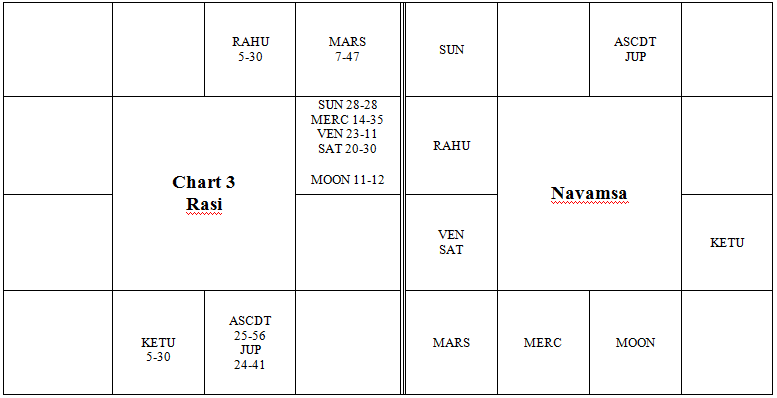 in the 9th which is prima facie a Raja Yoga. Secondly, the 4th lord Saturn is in the 10th directly aspecting his own house. The Ascendant lord Venus is with Saturn, Mercury, Sun and the Moon. The 4th lord Saturn in the 10th has given excellent results. So far as the 4th house is concerned, the native has a spacious clinic, a fleet of imported cars and enviable popularity in his home town. The 9th. 10th, 11th, 4th, and Ascendant lords are all placed comfortably in the 10th aspecting the 4th house bestowing the best results. The 4th house is highly fortified.
Planets in Fourth
The Sun in the 4th House : According to,
Bhrigu – Confers royal honours but also causes fraternity related disputes, defeat from enemy and restlessness due to low status people.
Vaidyanatha – Cruel mental disposition, mental dullness and heart related problems.
Kalyana Verma – Gives vehicle comforts, physical weakness, heart related maladies, loss of parental house and money and service under an unworthy king or master.
Meenaraja –Is physically sick, ugly with repulsive teeth and interested in unpleasant acts.
Chamatkara Chintamani– Makes one a colourful officer, causes fraternity disputes, live abroad, defeated by enemy and always suffering from unrest.
These results may vary from native to native depending on various aspects such as the position of the 4th lord, malefics and benefics in relation to 4th house and their position and aspect on the 4th house.
Moon: Bhrigu- If debilitated gives poor longevity to mother and becomes detrimental to all the significations of the 4th house. On the contrary, if the Moon is well-placed or exalted, he gives govermental power, horses (vehicles), wealth, pleasant life, love from mother and longevity to mother. Makes the native attracted to other women.
Jeevanatha: Subscribes to a similar view as Bhrigu.
Vaidyanatha: Makes the native educated and happy; however he will be in the control of and attracted to women other than his own wife
Manasagri: Also confirms the same result.
Meenaraja: In a woman’s chart, makes her happy, beautiful, and lucky with ornaments. She will be religious and interested in auspicious acts.
Jupiter : Makes the native happy, intelligent, well behaved, land-lord with many vehicles. If Jupiter is conjoined with a malefic then he will deny the above gifts.
Jeevanatha: Makes native devoid of enemies or invincible.
Manasagari and Garga: The results are almost the same and the native will be blessed with unlimited happiness.
Venus : Bhrigu, Jeevanatha, Kashinatha and Yavanacharya: Gives the native a handsome physique, intelligence, brothers, compassionate attitude and wealth. But if the Karaka is in an enemy’s house or debilitated or weak, the native will be a pauper with a disturbed mother and will have illicit relations with other women.
Yavanacharya: If a female, becomes wealthy, happy and leads a luxurious yet religious life with senses under control.
Saturn: Bhrigu causes loss of mother and gives a step-mother. If Saturn be in his own house or exalted, these results do not occur and the native’s mother will have a long life. If Saturn as the Ascendant lord is in the 4th, the native will have high position in society and be happy. But if Saturn conjoins 8th lord in the 4th, the native may have a tough life with loss of mother.
Garga: Relocation(stanbransh) and loss of position.
Mars : Bhrigu: Causes broken home and loss of father in the 8th year. The mother is always sick and the native lives in far-off places with dirty physical disposition. But if the 4th happens to be his own house or exaltation place, Mars gives all the results which the 4th stands for.
Mansagari: Will have nomadic movements will be a miser and tries to enjoy others money and women.
Rahu and Ketu : The impact of Rahu and Ketu has not been dealt with in detail by the ancient authors. But, it would be a serious mistake to undermine the strength of the Nodes in this context. Rahu in the 4th, I find, makes the native dignified and respectable in society and confers Raja Yoga depending on the strength of the horoscope. Especially Rahu in Virgo is the best. Rahu by all means makes one an extraordinary human being with all power, pleasure and happiness in the world. Similarly, Ketu plays havoc in the 4th house as he represents Mars. Ketu tries to deny whatever the 4th house stands for at some point of time. Let us not forget Kujavad Ketu and Sanivad Rahu. Interestingly Rahu and Ketu in the 4th and 10th fulfil the expectations of the native only when the native has lost all charm and the allurement for the same. As the true replica of Saturn, Rahu is the master of delay in all aspects. I feel Rahu is as slow in giving the benefits of the 4th house as Ketu is fast in destroying the same.
(to be contd.)
Courtesy: MODERN ASTROLOGY (K.D.P. Rao, l.A.S)

2 Comments on “Fourth House: Key to Yogas- I”