Lohri is a winter festival widely celebrated in Punjab and some northern states in India. It marks the passing of the winter solstice and the beginning of the northward movement of the Sun. It is also a harvest festival for the Punjabis as it arrives during the cropping time of Rabi fields. The festival is also celebrated in Haryana, Delhi, Himachal Pradesh and in the Punjab region of Pakistan.

Lohri is an occasion for get-togethers and merrymakings for those who observe. It is mainly celebrated by the Sikh and Hindu communities. The festival typically falls on the 13th of January every year.

This year’s Lohri, as usual, is on the 13th of January. Major celebrations occur at the night before Makar Sankranti (January 14). Maghi or Makar Sankranti is, traditionally, an important day for the Hindus, marking the Sun’s transit to Makara or Capricorn. According to the Bikrami/Vikrami calendar (the historical lunisolar Hindu calendar), Lohri is to be celebrated on the day before Maghi. The festival falls in the month of Paush is set by the solar part of the lunisolar Punjabi calendar and, most of the time, it will be January 13 in the Gregorian calendar.

Lohri marks the passing of the winter solstice (the southernmost point in the Sun’s travel path). Thus, it also marks the beginning of Uttarayan – the Sun’s northward movement. As Uttarayan progresses, the days get longer and the nights get shorter in the northern hemisphere. So, Lohri is also an occasion welcoming longer warmer days. For many people, this festival is a ‘thanksgiving ceremony’ dedicated to the Sun God for the wonderful winter harvest.

Some legends associated with Lohri

The most important legend associated with Lohri is that of a Muslim dacoit Dulla Bhatti. He lived in Punjab during the Mughal reign. He was a brave and generous man with a Robin Hood-like reputation. He was regarded as a hero especially for rescuing Hindu girls from being forcibly taken as slaves. Besides saving the girls, the man also arranged marriages for them. The adventures of Dulla Bhatti and his exploits in saving two girls Sundri and Mundri have become a theme of Punjab’s folklore. Singing folk songs narrating this story is a common tradition on Lohri. Children go around the homes and sing the songs with an exclamation ‘ho’ after every line.

This legend says that once the ancient people made a mantra to protect them from the extreme winter cold. It is believed that chanting of this mantra made Sun God hear their prayers and, as a result, showered heat to lessen the cold. For thanking God, then people started chanting the mantra, standing around a fire which implicated the Sun God. This happened to be the origin of Lohri during which lighting the fire and assembling around is a common practice.

In ancient times, people used to light a fire for protecting themselves and their habitat. Gradually, lighting the fire became communal and people began to perceive fire as their protector. Also, it became a tradition for young boys and girls to go around and collect cow dung and firewood for the fire of Lohri. The term ‘Lohri’ is supposed to emerge from the word ‘Loh’ which means the light and warmth of the fire. In rural Punjab, the festival is known as Lohi.

Another folktale says Lohri was the sister of Holika – the legend associated with the Holi bonfire. Offering til (sesame seeds) to fire and eating things made of them is a major Lohri tradition. It is also believed that the term Lohri has emerged from the term ‘Tirohi’ which in turn was coined from the words ’Til’ and ‘Rohri’.

Lohri is a festival celebrating the winter harvest as well as paying homage to the Sun God (Surya). Many of the rituals associated with it implicate the attachment of people with Mother Nature. 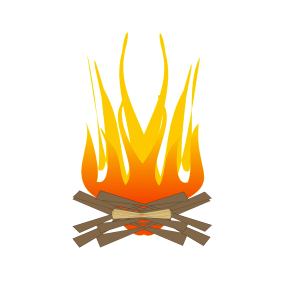 The lighting of the bonfire is an important Lohri tradition. It varies with location in Punjab. In some parts, a small image or effigy of the folk Goddess Lohri is burnt. The effigy is made with cattle dung and is decorated before kindling a fire beneath it. While doing so, people chant praises. Lohri Goddess is an ancient aspect of the celebration and is a manifestation of the age-old winter solstice celebrations. In some parts, there would be no reference to Lohri Goddess and the fire consists of cow dung and wood. People gather around the fire, chant prayers and give some offerings as an act of showing respect to the natural element of fire.

Lohri, being a harvest festival, also signifies the importance of fertility. Couples praying for children and parents praying for their unmarried daughters are common Lohri rituals. In the Punjabi tradition, it’s a big occasion for the newlyweds and the mother of newborns. Several special rituals are performed in the families to rejoice the birth of a baby or the arrival of new bribe.

Lohri is an official restricted holiday in Punjab where it is celebrated by Sikhs, Hindus, Muslims, and Christians. It is an occasion for intense merriments. People celebrate it with singing, dancing, having get-togethers and sumptuous dinners. People performing Gidda and Bhangra to the beats of Dhol is an intrinsic part of Lohri celebrations. It is celebrated as Lal Loi among some sections of the Sindhi community.

Preparations would begin a few days before the Festival. Young boys and girls form groups and go from door to door singing folk songs. People would welcome them and give them things like til, gachchak, crystal sugar, jaggery, peanuts, and popcorn. The collection thus gathered is also known as Lohri which will usually be distributed at the festival. Sometimes, the children are given sweets, savories or money. Turning them back empty-handed is considered as inauspicious.

The lighting of the bonfire is a major part of the Lohri celebration. The bonfire is lit at sunset in the main village square and people would gather around. Dried cattle dung and firewood are usually used for the bonfire. Villagers gathering around would bow their heads and make prayers as an act of showing respect to the Fire or Sun God. The collection gathered at the daytime including sesame seeds, jaggery, sugar-candy, popcorn, peanuts, rewri (a delicacy made out of sesame seeds and jaggery), etc. are tossed on the bonfire as offerings. After doing these, people would sing and dance until the fire dies out.

Punjabis may organize private celebrations in their houses. In the families that recently had a marriage or childbirth, the celebrations reach a higher level of excitement. The first Lohri of a bride or newborn is considered as special. So, several special rituals are performed at these families to take the celebrations to its peak.

The Lohri celebrations culminate with a sumptuous dinner. Punjabis have a broad menu of traditional food items/savories to prepare at this occasion. Lohri recipe usually includes ingredients harvested at that time of the year. Makki di roti (hand-rolled bread made of millet), Sarson da saag (cooked mustard greens), Rau di kheer (dessert made of rice and sugarcane juice), Tricholi or til rice (made out of jaggery, sesame seeds, and rice), Ganee Ki Kheer, Atta Ladoo, Dry Fruit Chikki, Til Barfi, Kurmure Laddoo, etc. are some of the common Lohri dishes. It is also traditional to eat Gajak, radish, groundnuts, and jaggery.

The Winter Harvest & its Social Significance

Lohri is a harvest festival with great significance to the lives of Punjabis and Haryana. Wheat, Corn, Sugarcane, Mustard, Radish, Peanuts, etc. are some of the crops harvested at this time of the year. Lohri is celebrated just before the mass harvest of winter crops. Eating radish, nuts, sheaves of roasted corn, various sugarcane products such as gurh and gachak are a part of the Lohri celebrations. Sugarcane festivals are sometimes organized amidst the Lohri celebrations.

The Punjab and Haryana societies and their economies have a dependence on the winter harvest. Some farmers in the rural Punjab area even consider the day after Lohri as the beginning of the new financial year.