MARS is known as Kshitija, meaning, son of the earth. People involved in professions that have anything to do with earth have a prominent influence of Mars in their horoscopes. This article intends to discuss the importance of Mars in professions related to earth science.

According to Wikipedia “Earth science or Geoscience” is an all-embracing term referring to the fields of science dealing with planet Earth. The formal discipline of Earth sciences may include the study of the atmosphere, hydrosphere, lithosphere, and biosphere. Though oceanography, atmospheric sciences and planetary geology also come under the purview of earth science I would like to restrict the present discussion to professions directly related to earth or geology.

Geology itself is a vast science including many branches in its fold. The branch which studies the physical properties of the earth including deep core, mantle and upper crust is called geophysics. Geophysics is commonly used to supplement the work of geologists in developing a comprehensive understanding of crustal geology, particularly in mineral and petroleum exploration. Geophysics includes seismology, the study of seismic waves of earth and exploration. Geophysics which employs various methods to study the physical properties of the earth such as gravity, magnetism, electrical properties and so on. The applied aspects of geology include engineering geology, environmental geology, hydrogeology, mineral exploration, mining and ore geology, petroleum geology and so on.

The profession has to be predicted by studying the 2nd and 10th houses, both from Ascendant and from the Moon-sign. Besides these, the Ascendant and the Moon-sign represent the native and also have a major influence on the profession. These houses their lords and their dispositors when connected to Mars by the way of occupation, conjunction, aspect or sign exchange may indicate a profession in earth sciences. Similarly, the influence of Mars on the Ascendant, 10th and 2nd houses in the Dasamsa may also suggest a career related to earth sciences. Further, Mars becoming the strongest planet in Shadbalas is also a factor to consider. It is better to use a tabular form to quantitatively measure the planetary influence on the above factors (See the table for chart 4). The majority of the factors leaning towards Martian influence can indicate a profession related to earth and earth science. 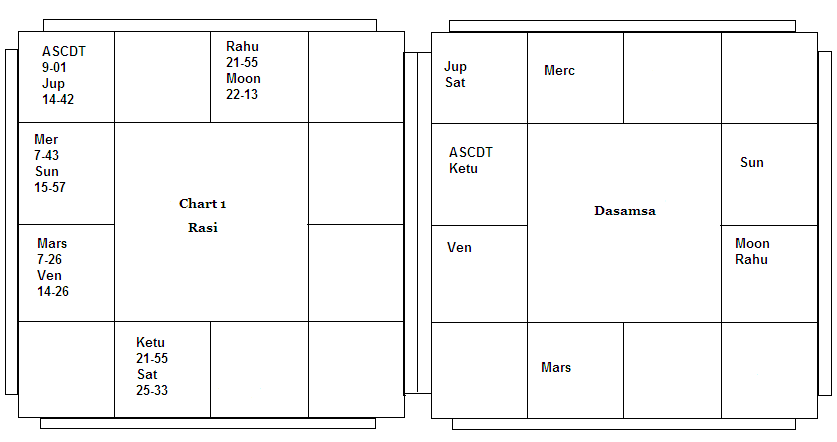 The native is a miner and geologist. Inducted into the American Mining Hall of Fame he was also a recipient of many honorary degrees and awards. He began his career as a mining engineer and later took up uranium exploration and search for porphyry copper, finally becoming an independent consultant. He also authored numerous articles and industry-specific works. Note the strong influence of Scorpio both in the Rasi and Dasamsa which explains his profession related to mining and exploration. 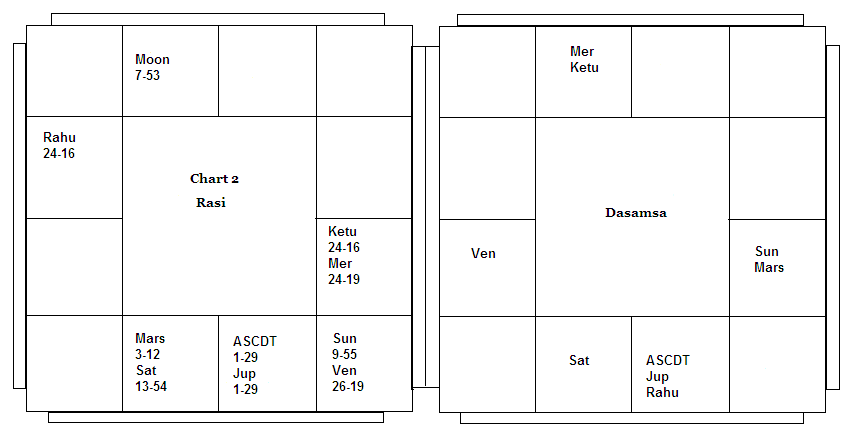 The native was a Palaeontologist and geologist who worked in the geological survey at Vienna and later, became professor of Mineralogy. Subsequently , he was made professor of Palaeontology and geology. He authored Handbook of Palaeontology which is considered the most comprehensive and authoritative work in the field. The dominant influence of Mars explains his profession related to the earth sciences. The sign Scorpio, and Saturn and Rahu connected his work with mineralogy and palaeontology while Jupiter and Mercury made him an author, professor and academician. 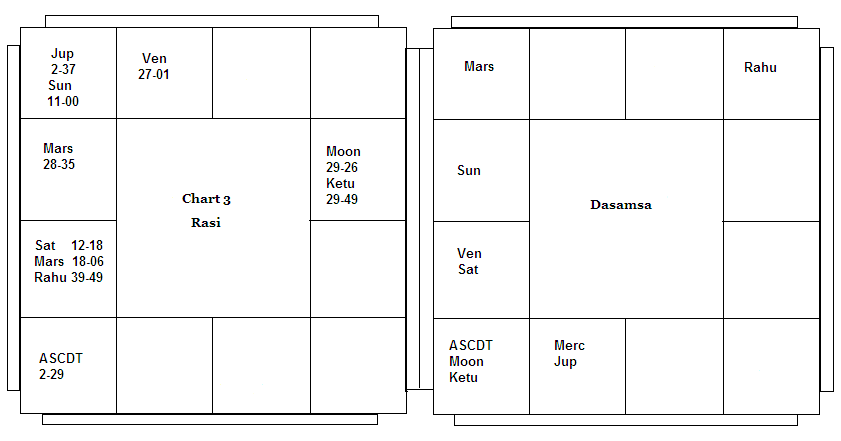 The 2nd house from the Ascendant in Chart 3 is occupied by 2nd lord Saturn, and Mars and Rahu. Mars aspects the 2nd and 10th houses from the Moon. Jupiter and the Sun aspect the 10th from the Ascendant while Mercury aspects the 2nd from the Moon. In the Dasamsa, Mars aspects the 10th while the Ascendant and 10th lords Jupiter and Mercury occupy a Martian sign Scorpio.
The native was a British geologist who was considered as one of the founders of moderneology. He proposed the Devonian and Cambrian periods of the geological timescale. Dominant martian influences coupled with the association of Saturn and Rahu with Mars explain the native’s work in palaeontology on which basis he proposed the past geological periods. Note the influence of Jupiter and Sun on the 10th house.
Chart 4: Male: Born May 9, 1979 at 21h.27m. IST at Guntur,(80 E 27, 16 N 18. Time Zone 5h.30m.E) 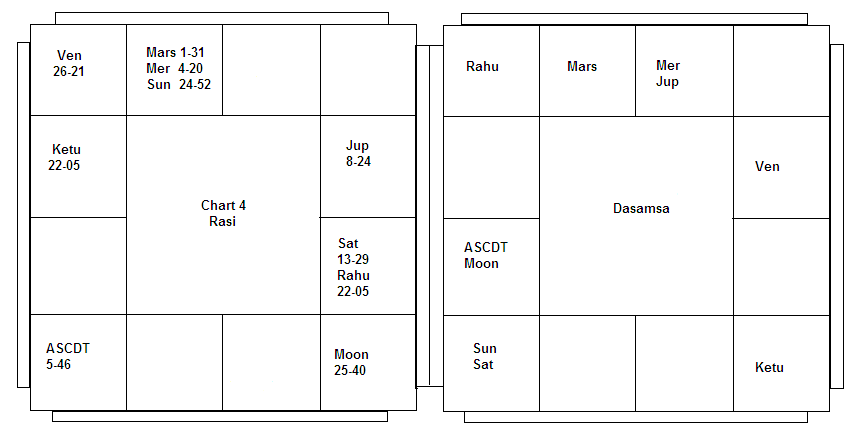 The native holds a doctorate in geology in the field of structural geology and tectonics and is currently working as an executive in a hydrocarbon exploration and production company. 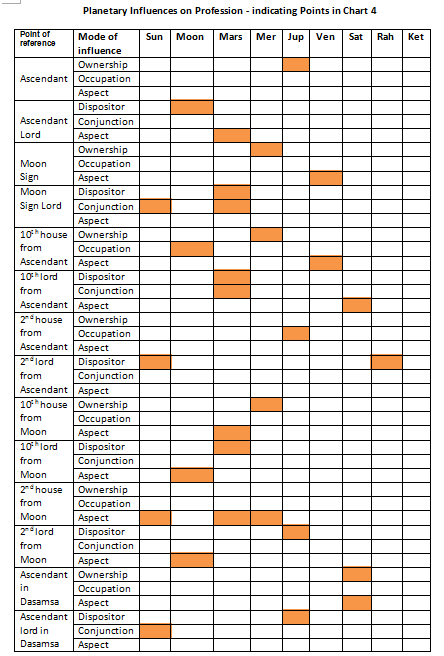 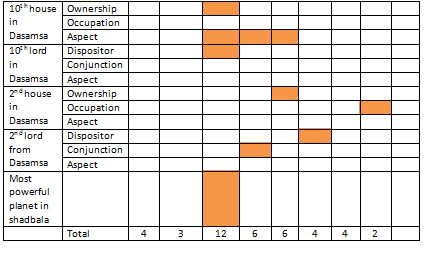 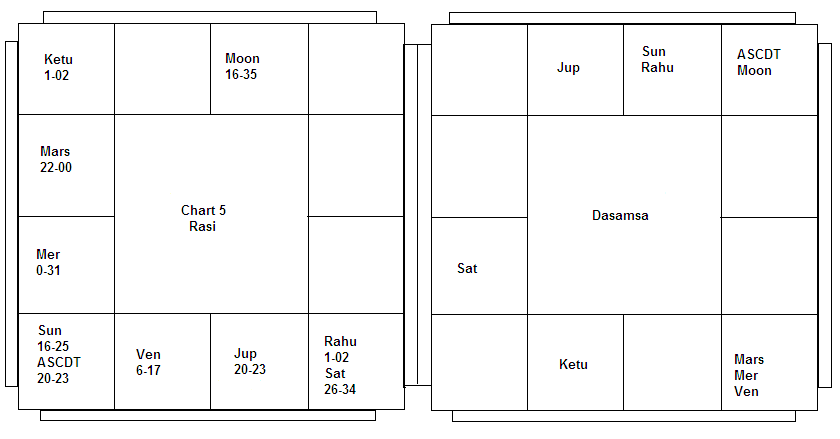 The native is a scientist, geologist, geophysicist and government consultant. After obtaining his Ph. D. he was on the faculty of the University of Nevada. He authored the book Faults and Earthquake Magnitude and also worked as a geology consultant for the U.S. government. Mars exerting predominant influence gave the native a profession connected with earth sciences while the influence of Jupiter and Mercury made him a teacher and author. The influence of the Sun on the Ascendant and the 2nd from the Moon-sign in Rasi made him a consultant to the government. 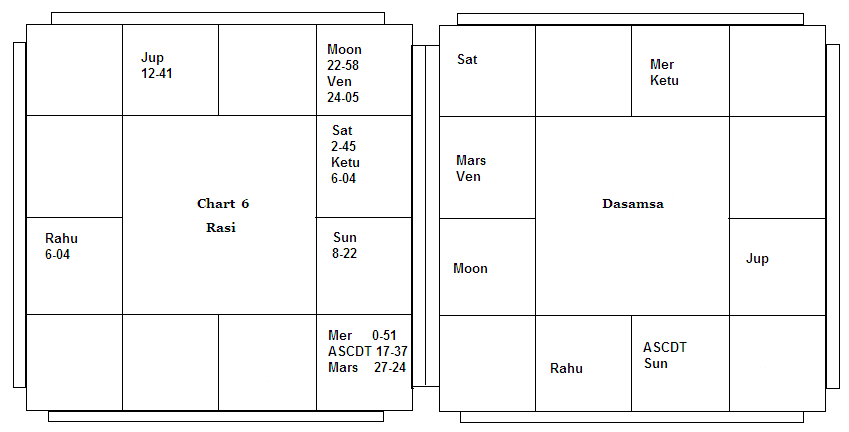 The native is a geochemist and professor of geology. He applied experimental physical chemistry data and techniques to geology and geochemistry problems and co-authored book the Solutions, Minerals, and Equilibria that revolutionized aqueous geochemistry. Predominant Martian influences have given the native a career connected with earth sciences while the influence of watery signs and planets gave specialization in aqueous geochemistry. Mercury and Jupiter exerting their influence made the native an author and teacher. 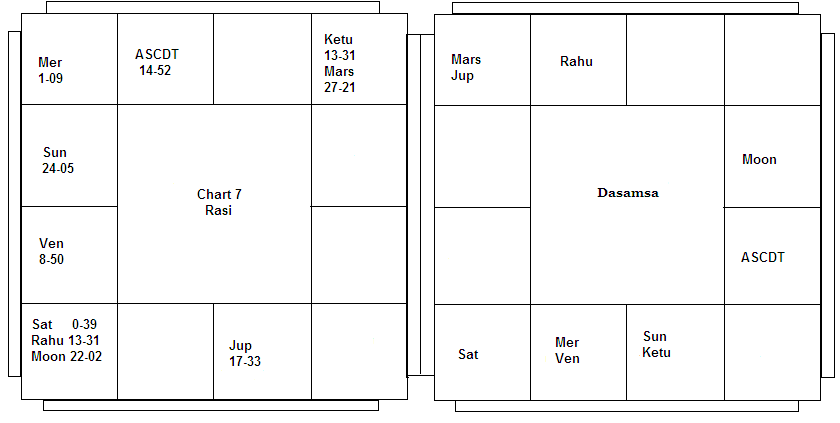 The Ascendant in Chart 7 falls in a Martian sign aspected by Jupiter while the Ascendant lord Mars joins Ketu in a Mercury-ruled sign aspected by Sarum. Rahu and the Moon. The 2nd lord Venus occupies the 10th aspected by Mars while the 10th lord Saturn is in a sign of Jupiter aspected by Mars. From the Moon-sign, Mars exerts his influence on the 10th, 1st and 2nd houses and also on the 2nd lord Saturn. In the Dasamsa. Mars joins Jupiter and aspects the Ascendant lord Sun and the 2nd from the Ascendant The 10th lord Venus and 2nd lord Mercury occupy a Martian sign Scorpio.
The native was a surveyor and cartographer. He worked as a high school teacher and also edited a number of mountain maps