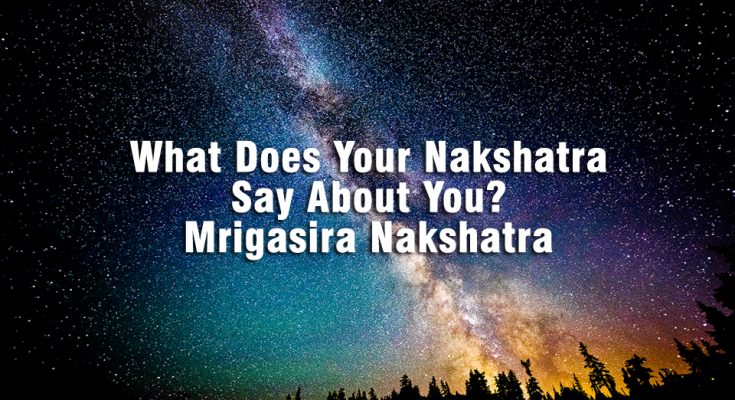 From 23-20 Taurus to 6-40′ Gemini, lies Mrigasira nakshatra which is symbolized by a deer head, ruled by the planet Mars and its deity is Moon. As a deer search for its food in the forest, Mrigasira people always search for the truth and wisdom. But this truth-seeking instinct can easily create a problem with others. These people will like to think about reality and behind the scene incidents, which obviously can irritate others.

Since this nakshatra is in the last padha of Taurus and the first padha of Gemini, these people generally show the tendencies of Venus and Mercury because Venus is the lord of Taurus and Mercury is the lord of Gemini. It is near the Orion constellation consisted of three mild stars. These stars are known in modern astronomy as Pi2-Orionis, Pi3-Orionis, Pi4-Orionis & Gamma-Orionis (Bellatrix).

In all ancient Vedic texts, deers are associated with gentle aspects of nature and often a  part of all romantic stories. In the Vedic epic of Ramayana, it was a magical deer (actually a demon posing as a deer) that astray Sita.

Like all other nakshatras, this nakshatra also has 4 padhas.

Mrigasira nakshatra padha 1: padha 23° 20′ – 26° 40′is in the Leo Navamsa and ruled by Sun. These people can be very creative and artistic because this star is mostly in Taurus, which is ruled by Venus. There will be a good education, there will be interest in creative activities, and special attention to beauty.

Mrigasira nakshatra padha 2: 2nd padha of Mrigasira nakshatra which is  26° 40′ – 30° 00″ Taurus, falls in Virgo Navamsa ruled by Mercury. They exhibit the quality of mercury. They are very communicative and humorous. Since Moon is in the late degrees of Taurus, these people can be not having good relations with the mother or other ladies in the family.

Mrigasira nakshatra padha 3:  00° 00′ – 3° 20′ Gemini, the third padha of Mrigasira lies in the Libra Navamsa which is governed by Venus. They will be a mix of Venusian and Mercurial energy, but airier. They are interested in material comforts.

Mrigasira nakshatra padha 4: 4th padha lies in  3° 20″ – 6° 40′ Gemini, falls in Scorpio Navamsa ruled by Mars. These people are very much brooding into their personal lives and they can be very argumentative also. Martian and Mercurial energy can make people very agitated.

Previous: What Does Your Nakshatra Say About You? – Bharani Nakshatra