Pairing in Prediction
The 2nd and 8th houses are generally called Marakastana (house of death) and Ayustana (house of longevity) respectively. The 8th house is a house of secrecy also. Longevity and mode of death, being the ultimate secrets of an individual’s life, are aptly assigned to it. The 2nd house, being the one opposite the 8th house, is rightly named as the death-causing house. As such, the influence of planets in or on the 8th house (signifying longevity and mode of death) either accelerates or retards the speed of death signified by the 2nd house(Marakastana) depending on other attendant conditions. Conversely, the planets posited in 2nd house also directly influence longevity and Niryana (nature of exit from this world) of the native. The 8th house (being the 12th from the 9th) signifies loss of luck (Bhagya) for the native which could result in unexpected problems in life.
At a subtler spiritual level, the 2nd house works as the vehicle for the creative force represented by the Ascendant and signifies the form of expression of the creative self in the material world through the medium of speech, family members, dietary habits, longing for wealth etc. The 8th house which is opposite (Samasaptaka) the 2nd works in unison with it (or sometimes against it depending on the influences in a particular chart) by generating the results primarily arising out of the influences of the 2nd house. The 8th house also signifies one’s secret destiny in the physical plane which is actually shaped by the hidden effects of the 2nd house. If the 2nd house could be considered to be the manifestation of a modified physical self working as the mode of operation of the Ascendant, the 8th house would connote the subsistence of that new facet of self through mutually complementary influences. In other words, the 8th house also signifies self-committed mistakes, either knowingly or unknowingly.
For example, the significations of the 2nd house such as family, food etc., have a direct link to the longevity of the native, signified by the 8th house. The dietary habits of a person combined with the type and quality of the food or potable liquids one regularly consumes either enhance or affect his longevity because food is the primary source of supplying energy to the body, although strength and stamina can be developed by other means as well. The condition of one’s finance also influences one’s food habits. A generally affluent life-style or a good flow of finance supports rich qualitative food habits while paucity of funds would offer restraints and force the native to adopt economical measures and resort to lower standards of food habits which might indirectly affect health and longevity.
Also, it is pertinent to note that if a person frequently changes his food habits it results in frequent problems in his health which adversely affect his longevity causing a reduction in his life-span. It is seen in that the health of people who have been used to a particular pattern of life-style and habits in their younger years is affected badly and serious sufferings are caused in old age when they change their life-style and eating habits due to a change in their financial status. Usually, one who maintains restraint over his food habits even when he can afford more or one who maintains fairly good and stable dietary habits without resorting to such changes would succeed in shielding oneself from health problems.  At least it may help in preventing major health problems created by erratic food habits. But, most people fall prey to circumstances and automatically make changes in their lifestyles, either on their own volition or goaded by others.

The environment within one’s family has a bearing on one’s mental makeup. The very urge to live longer predominates in a favourable environment while in adverse conditions the native would many-a-time wish for getting his longevity terminated as early as possible. Such dejection caused by unhappy family  environment (2nd house) might push him to attempt suicide or wish for forced termination of his longevity (8th house).

Not only that, the environment within one’s family has bearing on one’s mental makeup. The very urge to live longer predominates in a favourable environment while in adverse conditions the native would many a time wish for getting his longevity terminated as early as possible. Such dejection caused by an unhappy family environment (2nd house) might push him to attempt suicide or wish for forced termination of his longevity (8th house).
The 2nd house rules wealth and the 8th house signifies unexpected money or wealth inherited from parents. Usually Rahu in the 2nd house is said to cause Akasmika Dhana Yoga (a product of Adhrishta) which augurs well for getting unexpected money or riches. A mutually favourable link between the 2nd and 8th houses would promote Dhana and wealth, usually from unexpected quarters or from a secret or hidden source especially when the link is fostered by natural benefics as Yoga forming planets in these houses. Even Rahu in the 8th could give unexpected money which would be by unfair means such as bribes, graft, kick-backs etc.
The honesty of a person in olden days was judged on the credibility of his speech. Vak (speech), signified by the 2nd house, was also given a lot of importance in judging a person’s ethical standards. It was deemed to be an irreparable disgrace if one’s credibility of speech was lost or if one was unable to maintain one’s oral commitments. There were instances of people resorting to even suicide (8th house) due to such disgrace. The scriptures very clearly advocate ethics in all our actions concerned with our body (kaya), speech (vacha) and mind (manasa). But, with the changing times this has also been steadily eroding day by day and it is less often seen in the people of the present generation.
Another very important fact about the 2nd and 8th houses is that they are highly sensitive to Kuja Dosha and Sarpa or Naga Dosha. If Mars, Rahu or Ketu are in these two houses they show abnormally more potent Doshas causing significant inauspicious results in the Bhava related areas. If there is any affliction to both these houses and their lords along with the Ascendant and the 7th houses by other natural malefics in the chart, the Dosha gets further intensified and it causes some havoc in the life of the native by either depriving one of a partner, child etc., or causing an unexpected end to such relationships.
Thus, an analysis of the 2nd and 8th houses as a pair provides clear clues to unravel the providential secrets which prepare the native(at least mentally) towards expecting the normally unexpected results in such important areas of one’s life as family, spouse, sorrow and miseries, wealth, riches and longevity.
Chart 1: Male: Born February 18, 1970 at 20h. 15m. at 13 N, 77 E 35. 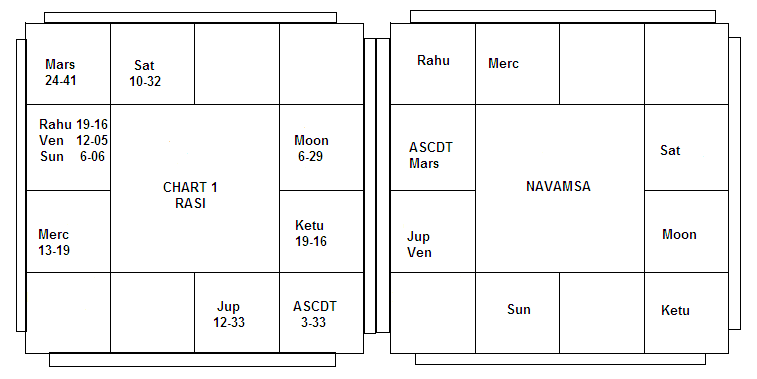 The Ascendant in Chart 1 is Virgo. Badhaka Jupiter is in the 2nd in an inimical sign. Mars (3rd and 8th lord) is in Badhakastana and aspects the Ascendant, 2nd and 10th houses. Saturn as a natural malefic and as the 5th and 6th lord is in the 8th also in an inimical sign and aspects the 2nd, 5th  and 10th houses. thus both the 2nd , and 8th houses are occupied by inimical planets and there is mutually a neutral 2-8 axis between Jupiter and Saturn.
The native is a surgeon by profession and his wife is also a doctor. The adverse influence of Mars and Saturn on the 2nd and 8th housed has resulted in lack of good understanding between them. The native’s wife is dissatisfied with him as she feels that he is not putting in the required effort?(3rd house ) for their growth. The basic bone of contention is that the native is interested more in a stable income through good employment (6th lord Saturn aspects 10th house) while his wife wants him to  practice independently. Also, the additional negative influence by Jupiter has ensured theta the native is not so comfortable with his other family members as well. He got separated from his mother and younger brothers immediately after his marriage bowing to the pressure from his wife though on talking terms with them.
The native’s wife has suddenly stopped her private medical practice and joined a course to continue her studies, thus causing a strain in the financial position of the family in Venus Dasa Mars Bhukti from August 2014 because of the affliction from Mars to the 2nd house (finance) from the 7th house, the Badhakasthana, ruling the wife.
Although both the 2nd and 8th houses are afflicted individually, when considered as a pair the gravity of their afflictions gets mitigated due to the mutual neutral aspects between Saturn and Jupiter and this helps the native in remaining passive to his wife’s provocation and managing the issues in family and finance without complicating them further avoiding any serious strains thereby.
The influence of inimical planets in both the 2nd and 8th houses deprives the native of getting any ancestral property or unexpected money which he cannot hope to get anytime in his life.
Chart 2: Male: Born May 23, 1984 at 15h. 40m. at 13 N, 77 E 35. 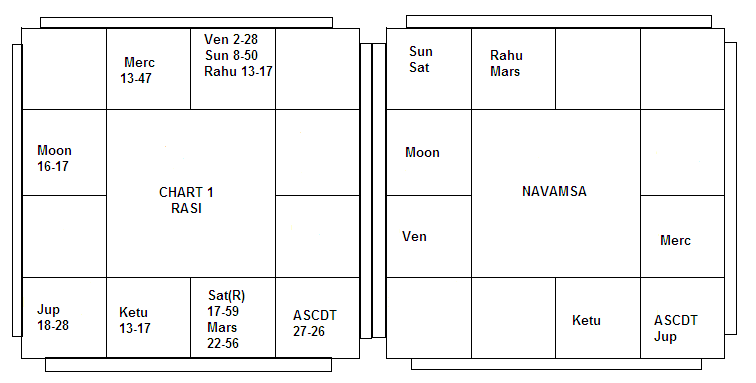 The Ascendant lord Mercury is in the 8th house in Chart 2. The 2nd house is occupied by 5th and 6th lord Saturn and 3rd and 8th lord Mars. Both planets are retrograde. The Ascendant lord Mercury in the 8th house (house of longevity) receives the aspect of retrograde Jupiter who is a Badhaka as well as Maraka. Mercury is also aspected by both Mars and Saturn from the 2nd house (Maraka stana). Thus, both the 2nd and 8th houses get heavily afflicted together with the Ascendant lord. The longevity of the native is severely affected therefore. Death occurred on 5-2-1999 in Jupiter Dasa Venus Bhukti.
In this case, the influences on both the 2nd and 8th houses have worked in unison, one complementing the other. Despite the powerful aspect of Jupiter (a first rate natural malefic) who is well posited in the chart in his Moolatrikona  Rasi and in a Kendra from the Ascendant, the native’s longevity is curtailed because Jupiter himself happens to be both Badhaka and Maraka for the nativity. His aspect on the 8th house (longevity) and Mercury (Ascendant lord) has not provided any relief. Rather , he has been more harmful to the native. Even the aspect of Saturn(the significator for longevity) on the Ascendant lord and the house of longevity (8th) could not save the native from Alpayu or short life not only because of his own retrogression but also due to his malefic conjunction with retrograde Mars who rules both  the houses of longevity (3rd and 8th) in the chart.
Thus it could be seen that when we analyse the 2nd and 8th houses as a pair instead of individually we get deeper insights into the respective portfolios held by them.
Courtesy: MODERN ASTROLOGY (Dr. Revathi Vee Kumar)
Continued from : Pairing Of Opposite Houses IIIA