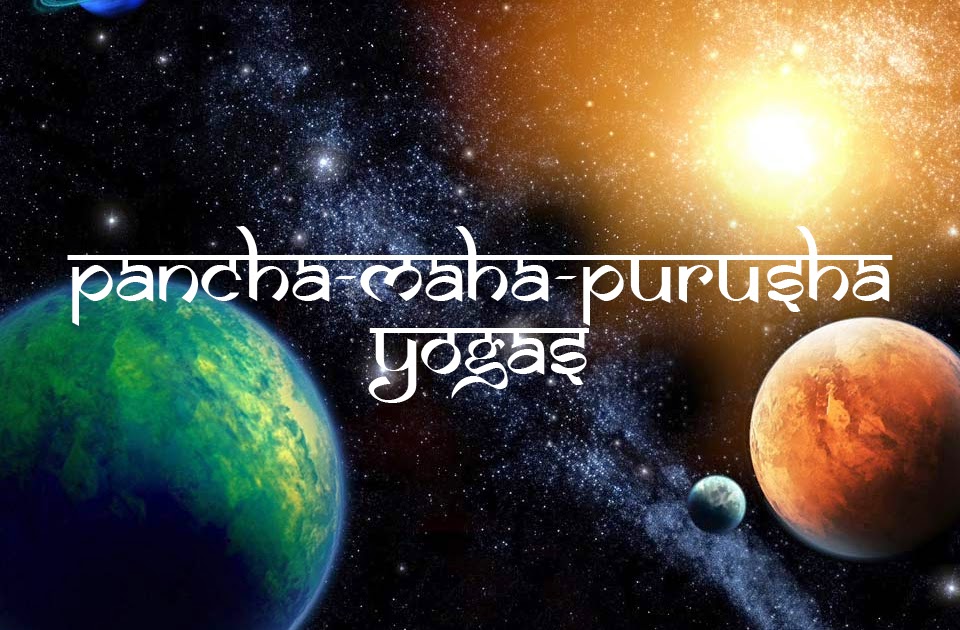 If Mars, Mercury, Jupiter, Venus or Saturn are exalted or placed in their own house, and if that house is a Kendra (1, 4, 7, 10) from the ascendant, then Pancha-Maha-Purusha Yogas are formed.

Ruchaka Yoga
The first among Pancha-Mahapurusha yoga, this yoga takes place when Mars is exalted or located in its own house. The first among Pancha-Mahapurusha yoga- A person born under Ruchaka Yoga will be blessed with prosperity; he will have a healthy body, will be adventurous, and possess desirable personal qualities. He will be open to charitable deeds and may win over his enemies. Showing great leadership qualities he may be employed in the Army or police departments.
Bhadra Yoga
The second in Pancha-Mahapurusha yoga, this yoga takes place when mercury is exalted or located in its house. The person born in Bhadra Yoga is said to be eloquent in speech, education, intelligence, scientific knowledge, possess a valiant face and can trace causes.
Hamsa Yoga
This happens when Jupiter is exalted or placed in the Kendra. A person born in Hamsa yoga has a beautiful personality, fair complexioned, attractive face, well-shaped body and feet. He will have wealth and lead a luxurious and good family life. He will be thirsty for knowledge.  People under this yoga tend to live till 100 years.
Malavya Yoga
This yoga happens when Venus is in the exalted position or its house located in its Kendra (1,4,7,10 from Lagna). Person with Malavya Yoga will have a graceful appearance and strong mind. He will have wealth and will lead a happy with wife and children. He may indulge in extra-marital relationship, and may possess knowledge in sacred scriptures and will lead a healthy life of 70-years
Sasa Yoga

This yoga happens when Saturn is in exaltation or its house is located in a Kendra results in Sasa yoga. Person born under Sasa yoga will have a tough nature. He will have commanding or leadership skills. He may be the head of his village  or panchayat and acquire wealth. He will be courageous and nurture the skill for a political career. He is competent and learned. The person has a tendency to find fault in others. His area of interest is metallurgy. Extramarital affair may dampen his peace. He will support his mother. People under Sasa yoga generally live a healthy life up to the age of 70 years.

If the aforesaid five planets are associated with either Sun or Moon, the Yogas becomes ineffective.