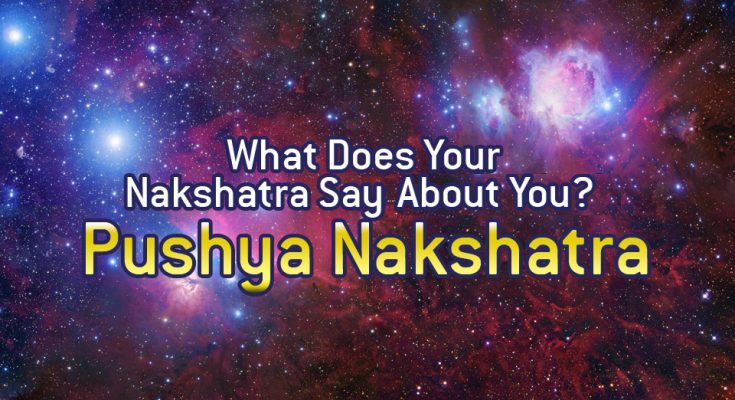 From (3:21 Cancer to 16:40 Cancer) lies Pushya Nakshatra, ruled by Saturn and its presiding deity is Brihaspati, lord of sacred speech/ the priest to the Gods. Pushya Nakshatra‘s symbol is a flower, a circle, an arrow, the udder of a cow. Tara was the wife of Brihaspathi, the teacher of God’s. She fell in love with Chandra ( Moon) and started staying with him. Brihaspathi wanted to bring her back, but she refused. Then, a severe battle broke out for Tara between Brihaspathi and the Moon ( Chandra) and Indra supported Brihaspathi. Finally, Tara has to go back to Brihaspathi, but she realized she was pregnant when she reached back. That’s how Budha, the planet Mercury is born. Out of his love for the child, Brihaspathi argued with Chandra that Budha is his child. But Tara has to reveal that the Moon( Chandra) was the father of Budha.

People belong to Pushya Nakshatra is known for their love for children. They will do anything to keep their children happy and satisfied. They are very much selfless and willing to take others pain. They don’t need to get all the love and care what they invested in others. This is why they are represented by cow’s udder, which means a cow is always ready to give that nourishment despite the nature of those who come near to it. They are more about strengthening and supporting others.

Pushya nakshatra padha 1: Falls in the Leo Navamsa which is ruled by the Sun. As Sun represents the ultimate form of purity these people may not available for nonspiritual ventures. They will be always interested to learn ancient texts and prefer teaching religion. They can be wealthy and charitable.

Pushya nakshatra padha 2: Falls in Virgo navamsa and ruled by Mercury. These people are hardworking and like to serve others. These people are law-abiding too. They will be having good communication skills as well.

Pushya nakshatra padha 3: Falls in Libra navamsa and ruled by Venus. These people are more homely and looking at, comforts, luxury, and sociability. They have a jovial nature and liked by all. They will give more preference for beauty and hygiene.

Pushya nakshatra padha 4: Falls in Scorpio navamsa and ruled by Mars. As the planet Mars, these people can be very action-oriented, daredevils and short-tempered. They can be interested in ancient texts also.

Previous: What Does Your Nakshatra Say About You? – Satabhisha Nakshatra