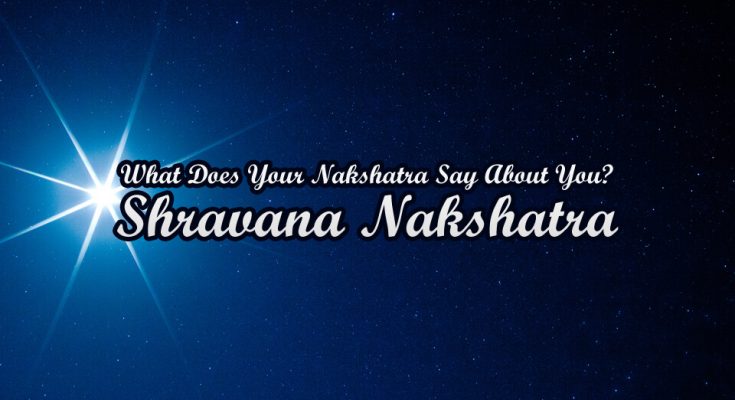 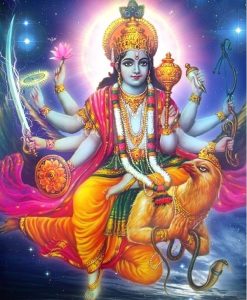 Shravana Nakshatra is all about “hearing good words” as Shravana means listening. People who belong to this Nakshatra can have concerns over others opinion about them because they want to hear the good things about them. That’s why they are hardworking so that they can get a good reputation. In the night sky, it appears as the shape of the eagle and it looks like three footprints.

Shravana Nakshatra’s deity is Vishnu, the symbol is ears, and the lord is Chandra. This Nakshatra belongs to the Capricorn sign. There is one more symbol for this Nakshatra that is three footprints. This story is also connected to Shravana Nakshatra during the incarnation of Vamana avatar, there was a demon king called Bali. He had conquered the three lokas or worlds.

Devtas were no match for this powerful Asura king, so they requested Lord Vishnu to help them and regain their glory. Lord Vishnu disguised himself as Vamana, a small Brahmin boy and approached King Bali while he was performing a Yagna, he asked King Bali for three steps of land, the demon king readily agreed to this, but the demon guru shukracharya saw through the design of Lord Vishnu, therefore he tried to dissuade King Bali but could not make him agree so he blocked the spout of water vessel of King Bali, Vaman the Vishnu avatar took out a sharp blade of grass to clear the obstruction.

As he poked towards the pot’s spout, the sharp edge of grass destroyed one of Shukracharya’s eyes, and this is the reason why Shukracharya has been seen to have one eye ever since. Venus doesn’t like to be in this Nakshatra as well.

Lord Vishnu in the form of a Brahmin priest (Vamana) asked for the land which will be measured by his three steps. King Bali agreed. Now Lord Vamana started growing up and became so gigantic and with three feet, he measures the entire universe. The story reveals the cleverness and at the same time cunnings of the Nakshatra. The moon is very strong in Nakshatra because this Nakshatra is ruled by this Moon itself. So the display of emotions will be on a higher level than other Nakshatra.

These people have great scholarly skills and immense thirst for knowledge. Shravana belongs to the constellation of Capricorn ruled by Saturn and its lord is the moon, so people born in this Nakshatra show the characteristics of Saturn and Moon. They like that discipline and order in their lives, and we can see them always dressed neatly. People belong to this Nakshatra can work in a profession where listening is the main role of Psychiatry and psychology; pastoral counseling; social work.

Previous: What Does Your Nakshatra Say About You? – Jyeshta Nakshatra