Synergy Between Dharma Moksha Trikonas
The 1st, 5th and 9th houses are called Dharma Trikonas or the tripod of righteous inclinations. The 4th, 8th and 12th houses are described as Moksha Trikonas signifying spiritual propensities. Any relationship between the Dharma and Moksha Trikonas or their lords provide the needed impetus for spiritual growth and evolution of the native . An excellent example of such a combination is that of the Jagadgum Sankaracharya Sri Abhinava Teertha, the 35th pontiff in the spiritual lineage of the Sringeri Peetam founded by Bhagavatpada Adi Sankaracharya, in whose horoscope, the 4th lord Saturn is in the 9th, the, 8th lord Mercury is in the 1st and the 12th lord Venus in the 2nd gets connected to the 5th lord Jupiter by Parivartana creating the right planetary environment for the embodiment of a great soul racing towards the Ultimate Goal.

Sun – Moon Conjunction
It was exactly a hundred years ago on November 13, 1917 that the embodiment of compassion and spiritual perfection Jagadguru Sri Abhinava Vidya Teertha Mahaswami was took birth under a uniques Planetary configuration that could leave no one in doubt of the great role he was to play in the hallowed lineage of Bhagavadpada Sri Adi Sankaracharya. The Sun and the Moon are two important factors, apart from the Ascendant , in any chart but more especially so in those that belong to spiritually advanced souls. The Sun is the natural significator of the soul or Atmakaraka ruling the Supreme Self. The Moon, on the other hand, which receives an identity from reflecting the solar brilliance, is the Manahkaraka or natural significator of the mind or the ego which is the cause of all duality and which therefore takes the soul away from its true nature.

In most charts with spiritual potential, the Sun and Moon, therefore, occupy pivotal points or houses indicating thereby the potential for the Higher Self to overcome the lower self or individual ego of the native.

The Moon or mind controls one at every moment of one’s life and in the process tends to lead one away from one’s true Self, the Atma, symbolised by the Sun. The Moon leads one to a false identification with thoughts from which the mind derives its strength. Sans thoughts there is no mind. Sans thought the True Self reveals Itself. The death or fading away of the mind leads to comprehension of one’s true Self.

The Sun and Moon together or moving towards a conjunction, therefore, is one of the best combinations for spirituality under certain other planetary conditions. Such a birth, described as occurring on or about an Amavasya, in common parlance is often treated with fear as showing a life devoid of success, happiness and health. Such charts are usually written off as of failures in life. Though true to a large extent, such a combination where supported by other planetary factors, can indeed release unusual levels of spirituality where it loses its puny individuality to become one with the Universal Cosmic soul.

Moksha as Dharma
The Moon in the Mahaswami’s case is the 9th lord. The 9th house is the Dharmastana which rules one’s sense of right and wrong. As the 9th lord, the Moon occupies the 12th or Mokshastana emphasizing the orientation of the chart with Dharma being directed towards Moksha. The Sun who is the Atmakaraka is also the 10th lord, ruler of one’s main activity or Karma in life. Such a 10th lord is in the 12th in Mokshastana which makes Moksha the main objective of the native’s Karma or activity.

The Acharya’s main goal in life was Moksha but it was not to be in an isolated sense far from the madding crowd. Right in the midst of the world and its teeming troubled souls, the Acharya had to not only pursue the goal himself but also guide and lead his lesser brethren towards it. It is therefore natural for such a leader of spiritual matters to enjoy Raja Yogas for otherwise, how can one be the pontiff of the ancient-most seat of Advaita philosophy, the hoary Sringeri Sarada Peetam.

The Sun and Moon together act as the 9th and 10th lords to generate a Raja Yoga, Dharmakarmadhipati Yoga, welding temporal duties with spiritual tasks.

Strength of the Ascendant
According to Varahamihira, the Ascendant lord, Jupiter or Mercury in the Ascendant make it extremely powerful. If planets other than these aspect or occupy the Ascendant, the results are not so(. Brihat Jataka 1-19) 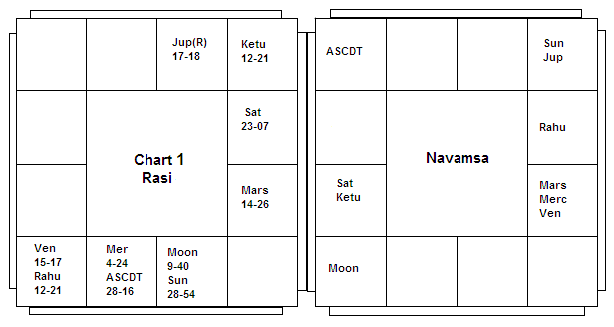 The Ascendant is the main pillar of a chart and its strength or otherwise can alter its entire scope. The Ascendant Scorpio in aspected by its lord Mars from the 10th, the most powerful Kendra. Mercury occupies the Ascendant itself while Jupiter aspects it from another Kendra. All the three conditions given by Varahamihira obtaining simultaneously make the Ascendant unusually powerful.

Deeply Spiritual Sign Rising
The sign rising on the Ascendant is Scorpio, the most spiritual as well as the most beastial sign, as described in astrological texts. Scorpio afflicted makes a beast of a man crude, vulgar, indolrat with brute appetites and an animal in buna form. Symbolised by the deadly scorpion which is known to sting itself to death, Ais sign often produces renegade souls who court misery and self destruction caught in unbridled passions and excessive levels of attachment and hate with scant regard for humaneness. In dignity, Scorpio is known to produce the highest levels of spirituality where the love of humanity and concern for the suffering supercede all considerations. As the 8th sign of the Kalapurusha (Zodiac) ruling life, a well-placed Scorpio bestows regenerative strength on its natives who can cut through the limitations of the body and mind to embrace all humanity as their own selves.

The Ascendant in this case is further strengthened by the fact, its ruler Mars occupies the 10th, the best Kendra, in the royal sign Leo. Mars here not only gets Vargottama strength but also Digbala. The Ascendant point rises in Pisces Navamsa, the sign symbolizing Liberation. As a result, the sign Scorpio becomes predominantly positive unleashing the tremendous potential it has in spiritualizing the native.

Mercury in the Ascendant as the Karaka for vak or speech endowed the Acharya with a bright smiling face and a strong sense of humour and who was quick to repartee with wit shorn of sarcasm.

Jupiter is the Karaka for Sattwa Guna, the natural fallout of which is peace that surpassath at all understanding springing as it does from an unending fount of bliss from within. Jupiter’s aspect on the Ascendant endowed the Acharya even as a little boy with a rare tranquility and compassion.

Mars, the Ascendant lord, is in the 10th, with Digbala where he becomes exceedingly powerful in conferring the highest office one can enjoy in one’s vocational life. Being Vargottama his blessings multiply manifold. Since the 10th house is intricately connected with the Ascendant through its lord, the pontificate came to him very early in his life even as he was stepping into his teens.

The 5th lord in the 7th is not conducive to marital life. In this case as a first-rate benefic, the 2nd and 5th lord, Jupiter in the 7th aspected by Mercury resulted in a life of unsullied Brahmacharya, one of the pre-requisites for not only qualifying for office under this order but also for attaining the ultimate in spiritual life.

Venus, the 7th lord, is in the 2nd in Sagittarius in exchange of signs with the 2nd lord Jupiter. This combination by itself could have led to a happy family life but Rahu with Venus would not let it be.

Venus and Rahu occupy Moola Nakshatra ruled by Ketu who, in turn, in the 8th, a Mokshatrikona is extremely comfortably placed to attract the native to the pursuit of spiritual truths. Moola is particularly associated with Saraswati, the goddess of learning, but being subtly influenced by the Jupiterean significations as a result of the exchange of signs between Venus and Jupiter transmutes learning into Gnana or spiritual wisdom.