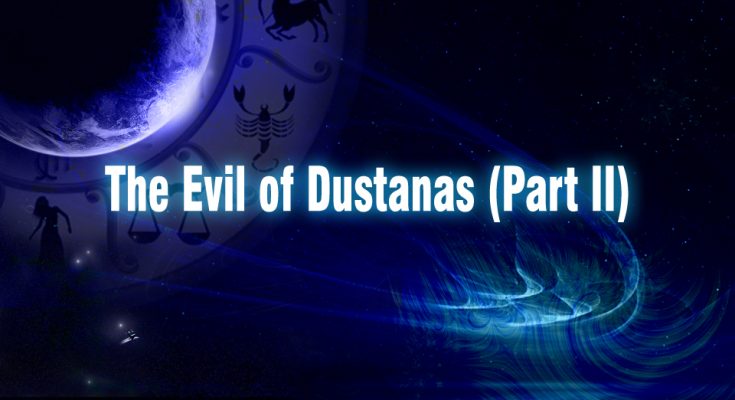 According to a booklet by Sri Ganapati Muni of Sri Ramanashram, when Saturn, the worst malefic, owns a good house and bad house, his inherent malefic swabhava or nature inclines him to inflict the evil of his bad lordship, rather than give the good of his good lordship, unless he occupies, say Capricorn, the 5th for Virgo Ascendant, or Aquarius, the 9th for Gemini Ascendant, or becomes the lunar lord or Chandra Lagnadhipati. Similarly, Mars, as lord of the 6th (and the 11th) for Gemini or the 3rd and the 8th for Virgo may be in the 3rd or the 8th or the 12th. But I cannot and do not subscribe to the theory that Mars, lord of the 10th, may be in the 6th in Neecha. For I have known of a case of an Aquarian engineer-officer being dismissed as in his chart Venus (lord of the 9th) and Mars (lord of the 10th) were in the 6th in Cancer, and in the 12th from the lord of Ascendant, Saturn, strong in the 7th but a bit bad in Leo!!

Thus, theoretical knowledge, ample and rich experience and God-given intuition are needed to enable one to make correct predictions — frank but not false and flattering ones.

The lords of the 6th, the 8th and the 12th are responsible for all the ills and miseries of life. The 12th leads to over-eating and over enjoyment causing ailments and diseases denoted by the 6th house; and diseases in turn lead to death, which, in the words of Alfred Tennyson, “closes all”. Similarly, the 12th lord causes expenditure leading to debts denoted by the 6th house, which may lead to disgrace and dishonor connoted by the 8th house and its lord. Kerala scholars and texts say that the 8th and the 8th lord are the worst of all – thatra athi kastostamah. For, if the 8th is vacant or occupied by a natural benefic and its lord is weak and the Ascendant and the lord of the Ascendant are stronger than the 8th lord even in cases where a strong 6th lord shows the existence of debts and enemies “out to cause the native trouble”, the native escapes disgrace and dishonor.

An Assistant Public Prosecutor was born in Leo Ascendant with Jupiter in the 6th in debility, the Moon in the 10th in Taurus with Saturn and Venus. He was in deep trouble. And, a professional astrologer opined that Jupiter’s aspect on the 10th and on the 10th lord would save him’ But. I doubted, for, Jupiter lord of the 5th i the 5th being Moolatrikona) was rather weak in the 6th in debility, even though Saturn in Chandra Lagna might afford some Neechabanga. Kalkiasa in his Uttarakalamrita states,

meaning, that a planet in infancy or old age (Avastha or in combustion (by the Sun) or defeated in planetary war is ineffective in its aspect for. It is as if the planet did not aspect. Only planets in their own houses or in exaltation are powerful and effective in their aspects.

Another native[Rasi : Taurus – Ascendant; Leo – the Moon; Libra – S Jupiter; Capricorn – Venus and Mars; and Aries – Kent] was born to inherit substantial property and has a long life – he is over 73 years. See lord of Ascendant in the 9th and Mars, lord of the 12th , in exaltation in the 9th.

meaning, that if the lord of the 12th is strong, the native has wealth, comforts and long life.

The rationale is that the 12th house indicates Moksha or hell; and, for reaching either (gradually) one must perform ample good or bad Karma (or deeds)” and that is possible, only when one lives long.rBut, this long-lived one is an oversexed man, due to close conjunction of Venus and Mars in a house of Saturn. So he was so prodigal due to wayward habits that he was prevailed upon to settle all his properties in favour of his wife for life, to be taken after her by her four daughters, as their only son died very young. (Mark Mercury lord of the 5th and Jupiter in the 8th with a combust Saturn). The son-in-law took a release, deed from her, purporting to efface herself and surrender her life interest to her daughters if the daughters maintained her and was paid cash of Rs. 10,000/-. As the cash did come to her, there was a decree giving a life interest to her and her husband (the native) who sued, as plaintiffs, to be enjoyed without any powers of encumbrance or alienation, to be taken equally and absolutely, by the four daughters, after the lifetime of both the plaintiffs. But the native of the horoscope sold two shops and another item of property to pay his old concubine, with the result, that, naturally, the daughters are now about to take action against him to prevent alienation to speculative transferees in order to safeguard their own interests and for contempt of court.