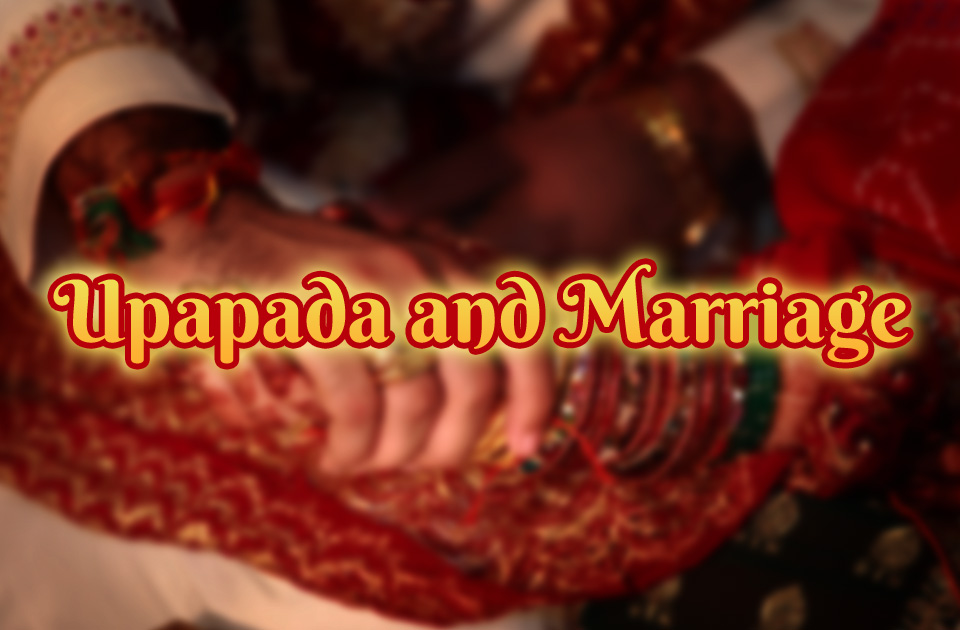 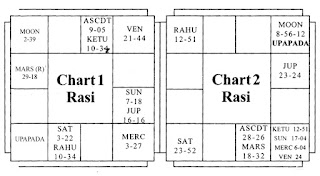 The 2nd marriage is seen from the 2nd house from the Ascendant (as it is in 8th from the 7th) and from the 8th from Upapada. The 2nd lord Mercury is exalted kin the 5th and the 8th lord from the Upapada Moon is well-placed in the 11th. The 2nd marriage which took place after 3 years continues to be stable.

In Chart 2, the Upapada is in Gemini with the Moon in it and aspected by Saturn, Sun, Venus, Ketu, Rahu and its own exalted lord Mercury. The 2nd from Upapada has exalted Jupiter and its lord Moon is in Upapada. The Upapada and its 2nd house both being strong the native had a long and happy married life for 54 years.

Chart 3 is of a spiritual aspirant. Upapada is in Aquarius having the Moon in the same sign and aspected by Mercury. Its ruler Rahu* is in Taurus in a cuspal degree with the lord of the 12th lord in the 12th. Its other lord Saturn is in the 2nd from Upapada, aspected by the Sun, Mars and Jupiter denying him marriage or rather, his rejecting it himself. The 2nd lord from Upapada Jupiter is in the Ascendant combust in the Sun (who is exalted in Navamsa), thus channalising his sexual energy into the spiritual. 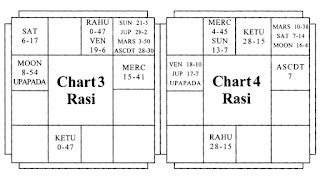 Chart 4 of a temple priest has the Upapada in the 8th with 2 benefics Jupiter and Venus aspected by Mercury and the Sun. Its lord Saturn is in the 12th with Mars and the Moon. The native is still not married at 37 years. However, two benefics in the Upapada and the 2nd lord from the Upapada Jupiter is in his own sign in Navamsa which does not rule out marriage. It is the afflicted lord of Upapada in the 12th house from the Ascendant that is delaying the event.

* Aquarius comes under the lordship of both Saturn and Rahu.
In Chart 5 of a bank manager, the Upapada is in Aries with the Moon and aspected by Jupiter and Saturn. Its lord Mars is afflicted in the 7th. He had difficulty in getting a suitable alliance for marriage, but finally got married in his 30th year. The 7th house and its lord Mercury are heavily afflicted, so also the Upapada lord Mars which have given neurological disease to his wife since about 3 years.
Chart 5: Male: Born March 22, 1950 at 6h. 37m. at 12 N 52, 74 E 50 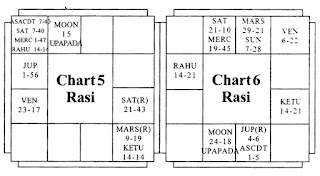 The native of Chart 6 got married in May 1997. He divorced his wife in 2000. The Upapada is in Scorpio with a debilitated Moon aspected by debilitated Saturn and Mercury. It’s lord Mars is in the Ascendant with Digbala which should have saved the marriage. Unfortunately Jupiter being retrograde and aspected by the Sun, Mars, Ketu and Rahu, all malefics could not help. 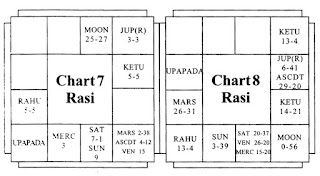 This lady’s (Chart 8) marriage was in trouble right from the beginning. It continued for about 4 to 5 years till she gave birth to a female child. The in-laws then sent her away to her parents’ house making various complaints against her. The Upapada in the 8th house gave initial hurdles in finding a match. Its lord Saturn is exalted in the 4th but debilitated in Navamsa. The Upapada aspected by 4 planets gave her a spouse well-placed in society. The 2nd lord from Upapada is Jupiter who is exalted in the Ascendant and is weak due to retrogression and due to Mars and Saturn being in a Kendra from him. The marriage did not work and she has been living away from her spouse for about 15 years. 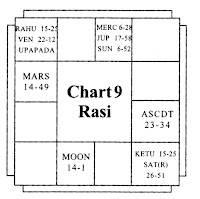 The Upapada is also of help in matching horoscopes for marriage. It is better the spouse’s Ascendant is in a trine from the Upapada of the other or in the 7th from it. Such marriages have lasted long. Even if the Ascendant of the spouse is in a trine to the lord of the Upapada of the other or the Ascendant is owned by a planet who powerfully aspects the Upapada of the other, then also it is good.
In Chart 2, the Upapada is in Gemini. The husband’s Ascendant is Aquarius in trine to it.
In Chart 1, the Upapada is in Sagittarius and his first wife’s Ascendant is in Gemini. The second wife’s Ascendant is Taurus in trine to Mercury, the 2nd lord, and aspects the Moon, the lord of the 2nd from Upapada (8th from Sagittarius)
Usually marriage occurs when transit Jupiter aspects or occupies the 2nd from the Upapada. Such marriages are stable. In Chart 1, the first marriage took place when transit Jupiter was in Aquarius in the 3rd from Upapada. It lasted for 3-1/2 years but when the 2nd marriage occurred, Jupiter was in Leo aspecting Capricorn, the 2nd from Upapada. This marriage is now in its 19th year.
To summarise,
i) Upapada is an important factor for analyzing matters relating to marriage, its duration and the type of spouse one is likely to get.
ii) Benefics Jupiter, Venus and the Moon tend to give a beautiful spouse and generally, a good marriage.
iii) Malefics Mars, Saturn, Rahu and Ketu aspecting or in the Upapada tend to delay the marriage; marriage is usually a dull affair.
iv) The 2nd lord from Upapada should be strong to sustain the marriage. Benefics or the Upapada lord aspecting the 2nd give a long married life. Malefics and bitter enemy of the lord of Upapada curtail the length of married life. Even benefics influencing the 2nd should be strong in both Rasi and Navamsa.
v) If Upapada and its 2nd house are weak, the native may not marry at all or may renounce the world.
vi) Upapada should be considered also while matching charts for marriage. •