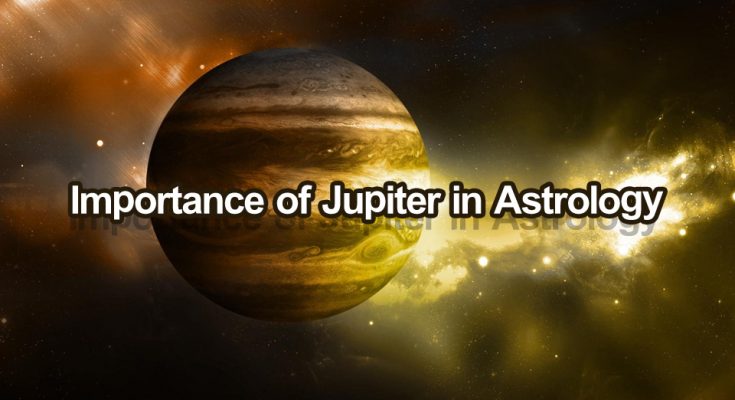 Jupiter is considered as the most benefic planet in astrology, it is also known as Brihaspati. Brihaspati is the teacher of Devas in ancient texts. He is the symbol for higher studies, philosophy, spirituality, international relations, etc. Jupiter rules 2 houses in zodiac wheel and that is Sagittarius and Pisces.

Jupiter is exalted in Cancer and debilitated in Capricorn. Jupiter is known as the ultimate form of purity; its duty is spread wisdom and optimism in the universe. So, whichever house Jupiter is placed in your chart will show that you are confident or hopeless according to the placement Jupiter. There are a lot of things which we need to look at to know the strength of Jupiter. It is generally known as PAC – placement, aspects and conjunctions.
Jupiter’s role is expanding the matters of the house which it is placed in. So, according to the PAC, you can find maximum possibilities from that house. If Jupiter is weakly placed, then you have to fight a lot or eventually, you have to find alternative methods to treat with the matters of that particular house.
Suppose, if your Jupiter is placed in its own sign Sagittarius, then you have to find what Sagittarius means. It is the Mool trikon, means first 10 degrees of Sagittarius, then Jupiter is tremendously powerful and in a benefic mode. At the same time, if it is in this sign and in 10th house, it may not be that much effective to give full results, because the 10th house which is Capricorn in natural zodiac wheel is the debilitation sign of Jupiter. So we need to look at such matters also.
If Sagittarius forms the 9th house and Jupiter is there in the 9th house, it happens only for Aries Ascendant, then Jupiter will magnify all the matters of the 9th house like higher studies, long travels, international relations, spirituality, writing, philosophy, astrology, and publishing. Then, in that native’s life, he will quench for these things throughout his life.
Even though Jupiter can give you blessings despite PAC, it also gives negative events if it becomes the lord of killer houses/maraka bhava. In any chart, killer houses are 2nd and 7th. For Scorpio, ascendant Jupiter owns the 2nd house of Sagittarius, so during the Jupiter main dasa or sub dasa, you may have issues with finance, health, and self -esteem. The more positive the PAC is, the more positive results can be expected.
An astrology chart can’t be read through looking at a single aspect. You have examined the whole chart. If your Jupiter is under bad PAC, then if it’s in great PAC in divisional charts, then it will definitely reduce the ill effects in the birth chart.
When you check the PAC, you should also check the Nakshatra placement of Jupiter and the dispositor as well.
Since Jupiter is known as the ultimate form of spirituality, and if the Jupiter is placed, the very you may even get a chance to work with spirituality. Jupiter forms a lot of great yogas. With Moon it creates the famous Gaja Kesari yoga, with Mars it creates Guru Mangal yoga, When Jupiter is in its own sign or exaltation sign, it causes Hamsa yoga as well.

10 Comments on “Importance of Jupiter in Astrology”