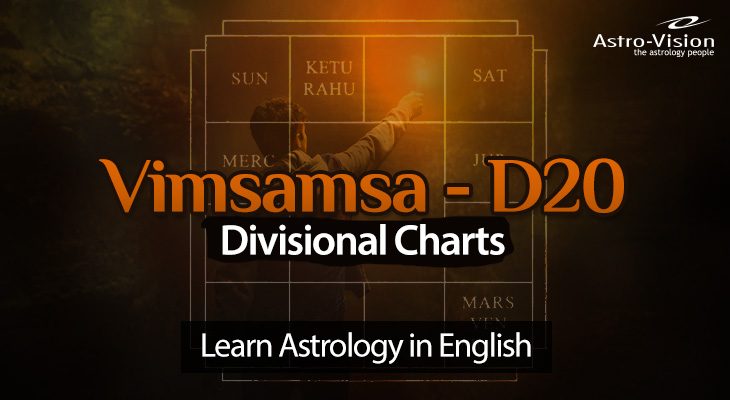 The reckoning of Vimsamsa commences from Aries in movable signs, from Sagittarius in fixed ones and from Leo in signs of dual nature.  In odd signs the Lords of Vimsamsa are Kali, Gowri, etc.  and in even signs, the presiding Deities are Daya, Medha, etc.

Vimsamsa is the 20th part of a sign, and its value is therefore 1° – 30.  In all movable signs, it commences from Aries in fixed one from Sagittarius and in dual one from Leo.

According to Mr. Robert Koch, in Jagannath Centre’s VARGA CHAKRA book, the study of spiritual attributes through the Vimsamsa chart, there are certainly important areas that need to be considered.

a. The Lord of the Moon sign should be aspected by Saturn and no other planet.

c. If all the planets aspect the Moon by Rasi or Graha Drishti then the Native is a famous Sanyasi.

d. If Jupiter is in 9th House, and the Moon, Jupiter, and the Ascendant are all influenced by Saturn the native renounces worldly pleasures.

e. It is often found that the moon is in Rasi or Navamsa of Saturn and has Parivartana Yoga with Saturn.

f. Venus, Saturn, and Ketu should all be mutually aspecting and preferably should be aspecting the Lagna as well.  These can be present in both the Rasi as well as in Navamsa Charts.

g. Venus Saturn and Ketu can also be in mutual trikonas in order to form Thapasvi Yoga.

h. Saturn itself aspecting the Lagna or its Lord leads to renunciation.

If any, or a good number of the above are visible in the Rasi and Navamsa Charts in addition to the Vimsamsa chart, then the advancement in spiritual consciousness achieved by the native is assured.