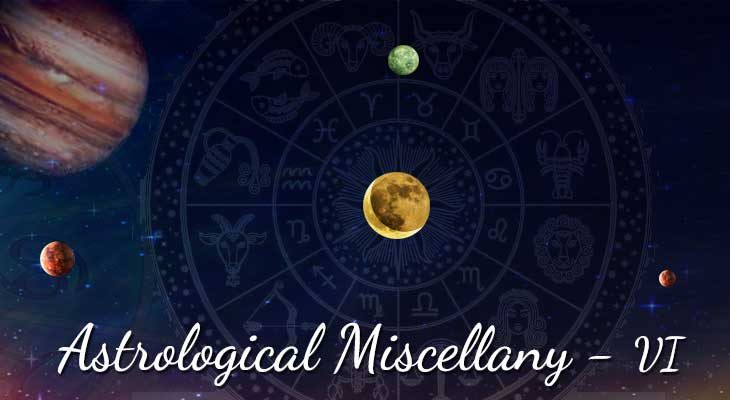 ‘Some time ago my brother asked me a question about his shop where he is running a small gold jewelry business. He has taken the shop on rent. Recently, the owner of the shop said he wanted to sell it. My brother’s question was ‘Will the shop remain with us if we buy it or will it be lost due to road-widening?’ “writes reader A.K. Prasad of Parvatipuram. 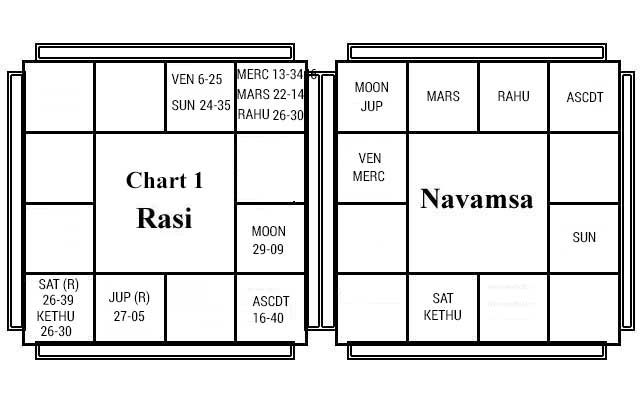 If our reader is into astrology and the brother is asking him for an astrological solution, then the question time can be taken for a Prasna chart Otherwise, not. The Ascendant being Virgo, the 4th house ruling the shop is Sagittarius occupied by malefics Saturn and Ketu. It is aspected by a Rahu-afflicted 8th lord Mars and Lagna lord Mercury, who is also afflicted. Hence this shows, buying the_ shop may not help as it would be lost (4th lord Jupiter in the 12th from the 4th) due to the corporation road-widening work. The fact, the Ascendant is aspected by malefic Saturn(R) also cautions against buying the shop in the sense, it would not serve the querent’s purpose.

Know about the Importance of Lagna Nakshathra

Reader Manjunath of Mangalore has some queries on horary astrology referring to the title Practical Horary Astrology. 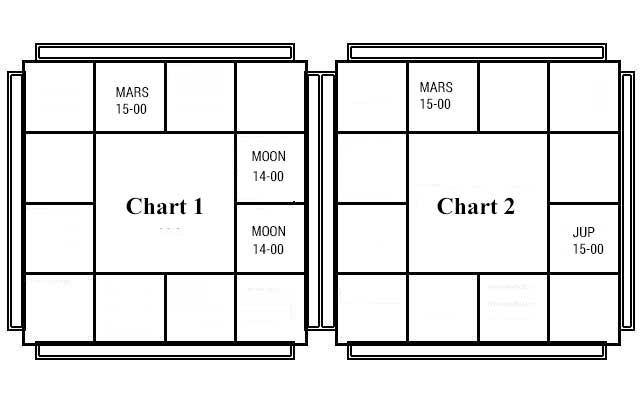 Ans: No, MaH in Aries 15° would not form an Ithasala with Moon in Leo or Cancer 14°. The faster planet must always be behind the slower planet. Further, it is not the position of the two planets in the Zodiac that counts but the Yoga is to be read with reference to the Ascendant . 1
“(B) When there is a hostile Ithasala between Lagna lord and significator i.e. the lord of the house governing the subject matter, is success ultimately ensured even though there may be obstacles, setbacks, etc. initially – e.g. Lagna lord Mars in Taurus 15° and significator Jupiter in Leo 16° (Chart 3) forming a square Ithasala aspect ?” 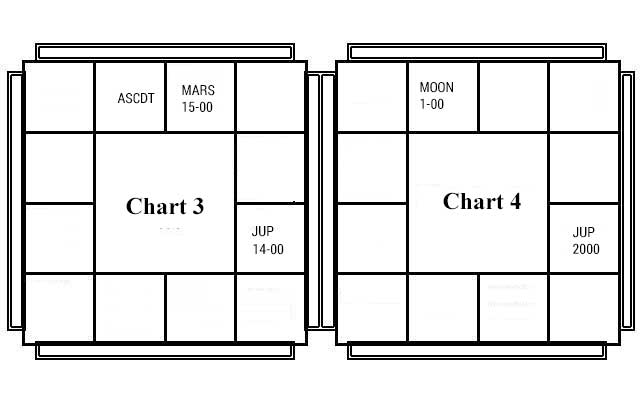 Ans: In judging results, the chart as a whole must be taken into account. Theoretically, a hostile Ithasala such as Mars in Taurus 15° and Jupiter in Leo 16° as Lagna lord and significator would ensure ultimate success after hurdles and initial difficulties.

“(C) In your book in Charts Nos. 55 (Mars and Jupiter), 59 (Moon and Mars), 64 (Moon and Jupiter), as well as in some more charts, you have shown an Ithasala between planets totally out of orbs, though at page 51 you say ‘a general orb of 6° can be allowed for all aspects’. Would you say that an Ithasala can be formed even if the orb is greater than those given in Neelakanta’s Prasna Tantra, as reproduced on page 57 of your book? Thus if the Moon is in Aries 1° and Jupiter in Leo 20° (Chart 4) would this nevertheless constitute an Ithasala?” ‘
Ans: In practice, theoretical rules must necessarily be modified, extended and qualified depending upon experience over a number of charts. As such, if the Moon is in Aries 1° and Jupiter is in Leo 20°, there is a weak Ithasala although the orb is exceeded. If the chart has other favourable indications, such an Ithasala would indicate success but in proportion to the effort put forth by the native. If the Ithasala is exact, the role of luck or the unseen factor would be greater than that of effort. The difference in the result on the basis of the orb of influence is one of degree. “(D) An Ithasala within an orb of 30” becomes a Muthaseela (page 53). The underlying principle seems to be the partile nature of the aspect. Would a similar Easarpha, of a friendly aspect between friendly planets, such as an Easarpha trine between Sun in Aries 15° and Jupiter in Leo 14° 30′ (Chart 5)or an Easarpha conjunction between Jupiter in Leo 14° 30′ and Sun in Leo 15° (Chart 6) prove somewhat helpful? In other words, if a benefic aspect between friendly planets is partile, will it help even if it is an Easarpha? “ 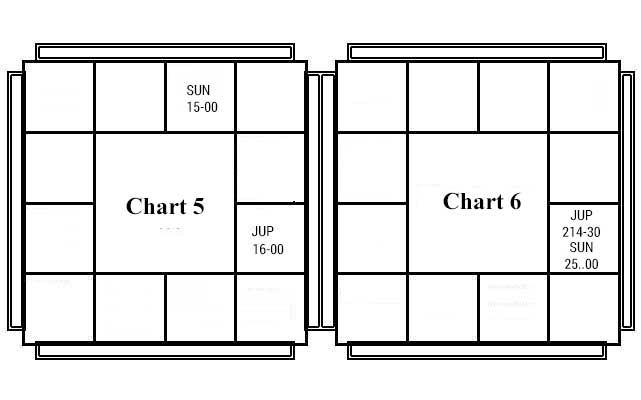 Ans: An aspect between Sun at Aries 15° and Jupiter’at Leo 14° 30′ is not an Ithasala or Muthaseela aspect and would not be helpful. Jupiter at 14° 30′ Leo and Sun at 15° Leo cannot be taken as giving the same results as in Ithasala conjunction with due reference to other factors. The Easarpha shows failure.

(i)Would (b) or (c) by itself – when the other two are absent – indicate success?
(ii)Would thef Ithasala of the Moon with either Lagna lord or significator – but not with both – indicate success in a situation where (a) and (c) are absent?
When (a) or (b) do not obtain and there is an Ithasala between 11th lord and significator Lagna lord – will there be a success?”

Ans: (i) Yes, they indicate success, [ OCTOBER 2019 • MODERN ASTROLOGY • 11 • 571] (ii) No success is not shown.
(iv) No success.
“(F) Will heavy malefic affliction of the Ascendant indicate failure even if one or more of the Ithasala aspects at (a) (b) (c) under question (E) above obtain?”
Ans: The heavy affliction to the Ascendant would block success.
“(G) Would heavy malefic affliction of the house governing the subject matter of a question – by itself – be a decisive or contributory factor for failure?”
Ans: The heavy affliction can show difficult conditions but it is the Ithasala or Easarpha that will decide on success or failure respectively.
“(H) In a situation where a close orb friendly (sextile or trine) Ithasala obtains as in (a) or (b) or (c) under Question (E), would heavy malefic affliction of the Ascendant as well as the house governing the subject matter plus malefic affliction of the Ascendant lord and significator portend failure? For example, in a question about promotion in service let us assume that the Lagna is Taurus occupied by 12th lord Mars, with Venus and Rahu in Libra in the 6th, and Saturn in Sagittarius in the 8th aspected by Mars (Chart 7). Although Venus and Saturn may be forming a sextile Ithasala, would Venus occupying the 6th and spoilt by Rahu, Saturn occupying the 8th and spoilt by Mars and Lagna being spoilt by 12th lord Mars indicate failure?” 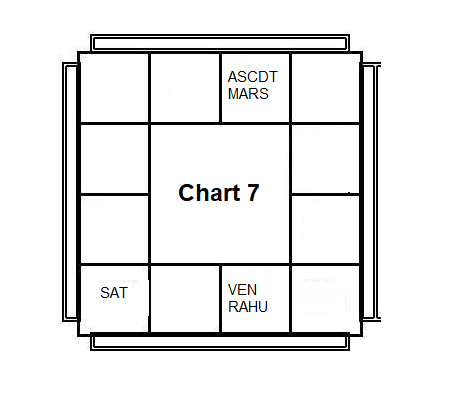 Ans: The Lagna is of the utmost importance. In this case, Mars in the Ascendant indicates ..Astrological Miscellany ■

failure and so, no promotion coming to the querent. The Ithasala between Lagna and 10th lord Venus can indicate a promotion being announced but the evil houses occupied by them can delay matters. Mars, a malefic in Lagna, may spoil things at the last minute or as the 12th lord may involve a transfer to an unwanted place, much opposition and other irritating factors which would ultimately discourage or prevent the querent from accepting the promotion, the final result being a failure or no promotion. The position of the Moon is also very important.