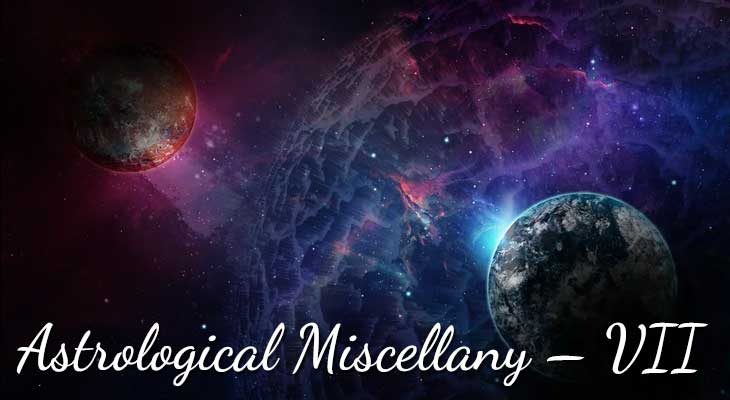 Riches are a boon if obtained by fair means and spent on honorable purposes. But this is always the exception for more money in the world is generated through foul methods than fair. Nevertheless, money is money and Dhana Yogas should be there in any chart to explain such riches. But the planets involved in the Dhana Yogas will help determine if the wealth shown in the chart is obtained through lawful means or through dubious methods.

In our country where men of God who were men of renunciation appear to have been replaced now by godmen, some of whom can vie with the richest in the world with their ill-gotten monies. A reader sends in the chart of one such godman who was very much in the news in the mid 1990’s but later had to languish in a 10 ft. X 7 ft. the cell in a famed jail of the capital 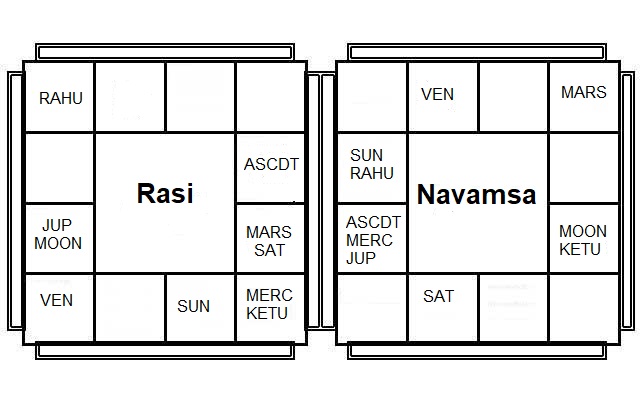 The Ascendant Cancer is aspected by its own lord Moon’ joined by 9th lord Jupiter which means the chart takes off on a Lakshmi Yoga. Jupiter is in debility in Capricorn but being in a Kendra from the Moon gets Neechabhanga, strengthening the Yoga while also cloaking it in religious garb. Yogakaraka Mars is in the 2nd house from the Ascendant with the 7th and 8th lord Saturn. This combination of Kendra and Trikona lords, Saturn and Mars respectively, has generated a Raja Yoga and in the 2nd from the Ascendant bestowed great riches on the native. As the 8th lord showing sins or the results of evil actions, Saturn’s joining the Yogakaraka Mars show that the channels through which the wealth was obtained were far from regular ones. The 2nd lord Sun is Neecha without Neechabhanga and aspects the 10th house. The Sun occupies the inimical constellation of Rahu, who in turn, is in the 9th house.

The 11th lord Venus in the 6th is in an Upachava. The 10th lord Mars is with malefic Saturn in Rasi is a Nakshatra ruled by Ketu. Rahu in the 9th and Jupiter in the 7th invest the native with Tantric overtones.

From the Moon-sign, the Dhana Yogas are even stronger. The 11th lord Mars and the 2nd lord Saturn in the 8th brought in an avalanche of material success but the same two planets form a Papadhi Yoga pointing to the questionable sources of this success. The fact Saturn, a contributory to the Dhana Yoga, is in the 8th form the Moon and is a first-rate malefic from the Ascendant and that his Dasa was running describe the plight of the native. According to Uttarakalamrita, Saturn and Venus in their mutual periods have the power to reduce even an emperor to a beggar. Saturn Dasa Venus Bhukti seems to have ‘given him Parabhavam or disgrace.

According to the reader Dr. A.V. Mohandaas of Nagpur, applying the dicta from classical texts may not work in all charts. Analyzing the chart in great detail, he writes: 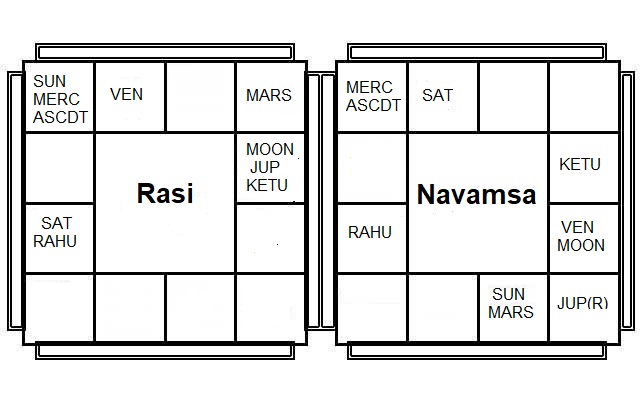 “For matters related to jail, the final word should be the 12th house and its lord (Phaladeepika 1-16). The 6th house deals mainly with enemies. Here, the 12th lord Saturn is in the 11th house (in own sign) with Rahu. Apart from this, the 12th lord is aspected by exalted Ascendant lord Jupiter from the 5th house. In Navamsa, Saturn gets debilitation.

“Sixth Lord in Ascendant: As per the Brihat Parasara’Hora Sastra (24-611), If the 6th lord is placed in the Lagna, the native will be sickly, famous, inimical to his own men, rich, honorable, adventurous and virtuous.

‘Litigation: The 6th lord with the 7th lord in the Ascendant may create some minor differences in married life. To ensure smooth married life, the position of the Arudha Lagna (AL) and Upapada (UL – Arudha of the 12th house) assumes significance. Here AL and UL are in 2-12 houses mutually. Hence a lot of effort from the side of the native is necessary to keep married life smooth.

“Career: The 10th lord form the Ascendant is exalted with the Moon. The 10th lord is placed in a house of Mercury in Navamsa. As per Phaladeepika (5-51), If the 10th lord is in the sign of Mercury, the native will earn his living through composing poetry, the study of sacred lore, being a scribe or a clerk, or through knowledge of astrology, studying Vedas, recitation of Mantras or as a priest or through fraud.

“The native is blessed to have a strong 10th rouse from the Ascendant as well as the Sun. The 10th house is aspected by the 2nd lord from the 4th house. Moreover, the 11th lord is very strong. So in all probability, the native is likely : 3 be engaged in business activities, connected with administrative matters. His Nipuna Yoga in the Ascendant also confirms the same.

“Jupiter Bhukti in Mercury Dasa commencing from the first half of 2021 may give a productive career connected with education, administration, etc. With the advent of Saturn Bhukti, the native may choose his own business connected with the above-mentioned areas. He may also take up the study of astrology after the first half of 2021 and gain proficiency in this branch of science.

“Marriage: The 7th lord from the Ascendant is in the Ascendant itself with the Sun. The 7th house is aspected by the 2nd lord Mars. The 7th house from the Moon is occupied by the 7th lord with Rahu. From Venus, the 7th lord is Venus himself. Marriage may occur during the current Mercury Dasa. Rahu and Jupiter Bhuktis are capable of conferring marriage. Rahu’s influence on the 7th house indicates he may marry someone of his own choice or it may be an inter-caste marriage after an emotional involvement. As the Navamsa Lagna lord occupies a quadrant from the Navamsa Lagna, it indicates that the marriage is within a reasonable age, without much delay. Marriage before the exit of transit Jupiter from Scorpio (before November 5, 2019) is quite possible.

“Rahu and Saturn occupy the 2nd from (Upapada Lagna: UP) According to (Jaimini Upadesa Sutras 1:4:12), If the 2nd house from Upapada Lagna is occupied by Saturn and Rahu, the native will lose his wife on account of calumny or though death. Hence it is strongly suggested thorough checking and matching of horoscopes must be made before finalizing any match for this native.”

Reader V.S. Karanwal of New Delhi writes: “The influence of the 6th lord Sun and the 11th lord Saturn on the Ascendant is not unfavorable but good for health, litigation and career as the Sun does not have any Dosha being the 6th or the 8th lord ( the Sun and Moon are free from Dosha of being the 6th, 8th and 12th lords).

“The Sun and Mercury in the Ascendant form Budhaditya Yoga which shows good luck and powerful career being aspected by Jupiter who with the Moon forms Gajakesan Yoga adding more to the helping career, education, and health by making the Ascendant more powerful.”

“This is the case of my grand-daughter who appeared for the Higher Secondary Exam in Commerce stream and got distinction in all the subjects scoring 82.5% marks. She got admission to the University for B.Com (Hons). We were performance worried grandparent. 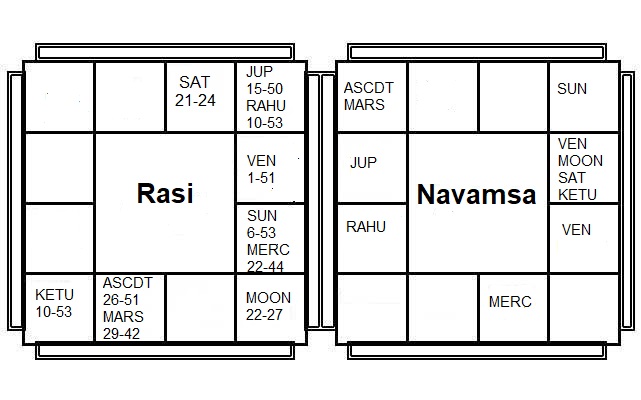 “Now a most difficult situation has come to us with my granddaughter declaring she wants to get married to a boy who has nothing at present. He lost his father very early in life. He has a younger brother who is bed-ridden due to a fatal accident. They live in a rented house and his mother is also dependent on him. He is working in the private sector. My granddaughter is bent upon marrying him and is even prepared to set aside her education. The father threatens to eomir.it suicide. There is total chaos in the family.

“The combination of Jupiter and Rahu forms a Chandala Yoga in the 8th. The presence of
Saturn in the 7th is alarming”.

Readers are invited to send in their views in brie: before October 25, 2019, on how the situation will evolve and if the granddaughter will have her way.•