The veracity of Chandra Lagna

“Sometime back, the newspapers carried a report on the world’s oldest man who died on Friday 11th August 2017, aged 113. He was survived by several grandchildren and great-grandchildren. The report said he was from Zarnow in Poland and was born on September 15, 1903. This Israeli holocaust survivor had the tenacity of purpose to keep himself in good health. In the absence of the birth time, one is constrained to take the Moon as playing a pivotal role in establishing the life circumstances and more interestingly, the extraordinary lifespan of the native. The horoscope is a strong example of a survivor overcoming adversity.” writes Chennai reader S.Athmanathan.

“The Moon is in Gemini in Mrigasira ruled by Mars who is in their own house Scorpio. Another factor making the Chandra Lagna strong is v exalted Mercury in a Kendra from the Moon. Mercury is the disposition of the Moon and his Kendra position with Venus is welcome.

“Saturn occupies the 8th house to give him extreme longevity. Saturn is in his own sign. The Sun is also in his own sign, the 3rd from Chandra Lagna. The 3rd house is the 8th from the 8th. Thus a long life is given. Further Jupiter .ispects such a strong Sun who is also the \tmakaraka. The 3rd, 6th, and 8th lords are supposed to be malefics. Here natural malefic Sun in Leo is the 3rd lord, Mars in Scorpio is he 6th lord and Saturn in Capricorn is the 8th ord. They have turned into benefics by virtue: f their own house occupation.

Know about the Importance of Lagna Nakshathra

Jupiter in the 9th shows his resilience to wriggle Jt of an adverse situation. Jupiter’s aspect one Moon, as well as the Sun, helped him emerge unscathed from whatever travails visited him in concentration camps. The Sun gives him grit and determination to survive at all costs. Venus is combust in Atmakaraka Sun giving him the rare courage to remain strong in the face of
worldly temptations.

“In the absence of the birth time, reverse engineering of sorts certainly helps in establishing the usefulness of Chandra Lagna. His death came in Moon Dasa Venus Bhukti. The Moon is the Maraka 2nd lord and Venus is combust in the Sun making them eligible to kill in their periods.”

“My mother was a patient of severe muscular dystrophy, passing her life dragging herself on the ground. She was deceptively married to a person who had been treated for lunacy before marriage and who deserted her and her children in November 1989. Fully dependent on her only son, she was all the time worried about her two marriageable daughters. Besides she was suffering from other consequential ailments. She would say, she even preferred mercy-killing if her two daughters could get married before that” writes a reader from the North recalling the difficulties his mother went through in her life. 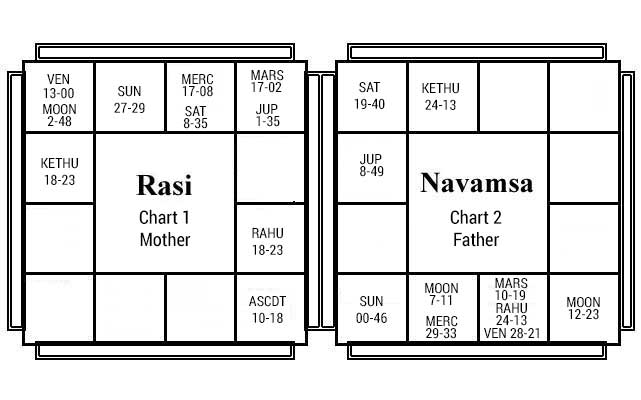 “My mother was married in June 1962. Three issues, one son and two daughters, were born through operation—no natural births. I feel, as a student of astrology, her sufferings were due to the three strong Papakartari Yogas and Kalasarpa Yoga in her chart.”

The 7th lord Jupiter in a cuspal degree afflicted by Mars and the ~th house and its Karaka Venus also afflicted by a Papakartari Yoga led to a very unhappy marriage and an extremely self-centered husband.

The 5th lord Saturn is in the 9th house with the Ascendant lord Mercury and this helped the 5th Bhava significations to some extent. Papakartari Yoga has caused some stress in relationships with children which is an obvious possibility in the context of her illness. The 5th lord Saturn with the Ascendant lord Mercury in the trinal 9th house would indicate in a very general sense, the children get settled in their respective slots reasonably well. 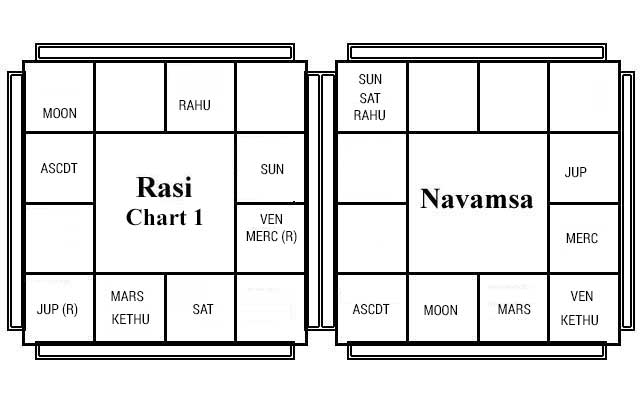 More readers share their views on this interesting case.

The promise of Yogakaraka Venus

According to reader V.S. Karanwal of New Delhi: “This is a case of late marriage only:

(i)The 8th lord Mercury is in the 7th house which delays marriage; ii)The 2nd lord Jupiter in the 11th in own house considered favourable as aspecting the 7th house, is retrograde which adds to more delay; (iii)The combination of Venus and Mercury in 7th house causes delay usually till 40 years; (iv) The

Jupiter Bhukti may bring about marriage during 2023-2024 with amplified good luck.”

According to the reader Mayuresh Risbud of Pune: “The 7th lord Sun is placed in the 6th house, a negative to the 7th house, in a friendly sign, and also aspected by Saturn from the 9th house. The 3rd lord (Bhagya or the 9th house from the 7th) Mars is well placed in 10th in its own sign, but the 3rd house is aspected by Saturn and Jupiter(R) which shows delay in getting a suitable match due to Saturn’s influence. Further, the 5th lord signifying gain of marriage is placed in the 7th house in a friendly sign but is retrograde and is the 8th lord signifies hurdles in getting married. However Yogakaraka Venus in the 7th house – hows prospects of marriage. Also, Jupiter as 11th ord (desire for marriage) in the 11th house shows desire for marriage and as Jupiter also aspects the ~:h house assures prospects of getting married.

“While considering the question of marriage for a female chart, we must also consider the Sun and Mars as significators of husband. Here the Sun is placed in friendly sign and shows the husband will be good-looking and handsome and Mars is in his own sign in the 10th signifies good career-oriented husband.

“The native is now in Venus Dasa Moon Bhukti. Venus being a Yogakaraka is placed in the 7th house whereas the Moon as 6th lord is placed in 2nd house in 6-8 position with Dasa lord Venus. The Antaras of Jupiter, Saturn and Mercury will be fruitful in getting married to Jupiter transiting 11th house in Sagittarius sign from November 2019. Hence there are good chances of getting married between Nov 2019 and March 2020.”

Effects of the Sixth Lord

Reader Prashant Kumar Dubey of Bhopal shares some interesting dicta from classical works which he thinks apply to the following chart. 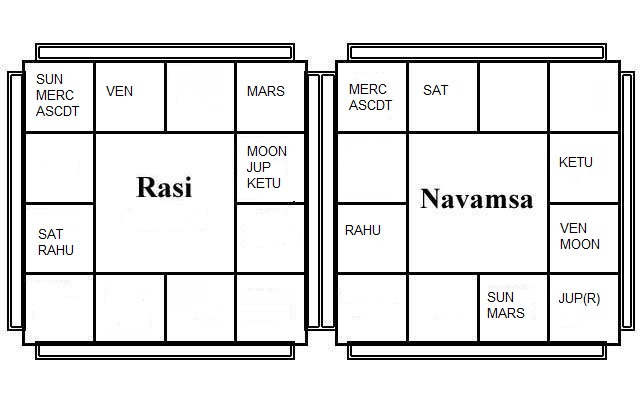 “I find the following present in this case:-

(b)A malefic as lord of the 6th aspects Lagna – one struggles at each step in life-
Here, the Sun, a malefic, as 6th lord is in the Lagna.

“In the light of these provisions, how does one interpret matters connected with career and marriage, especially if the Dasa is of the 7th lord Mercury who is with the 6th lord Sun?”

Readers are invited to send in their views in brief before September 25, 2019. •