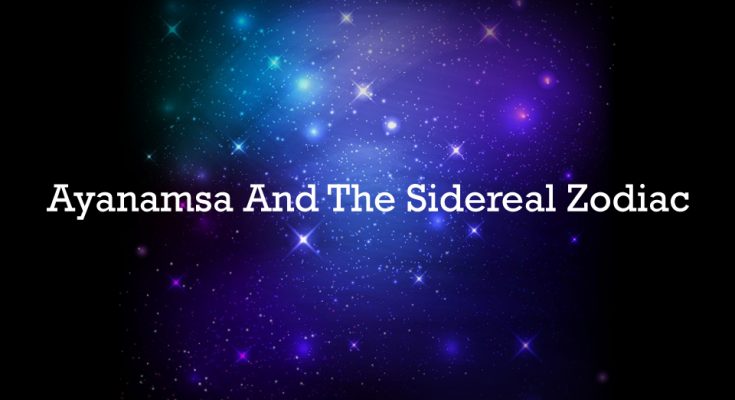 Arva Siddhanta took the number of revolutions of the Ayana during a Kalpa as 578159. Taking one revolution as equal to 96°,the annual rate of precession would come to 2′ 52″. 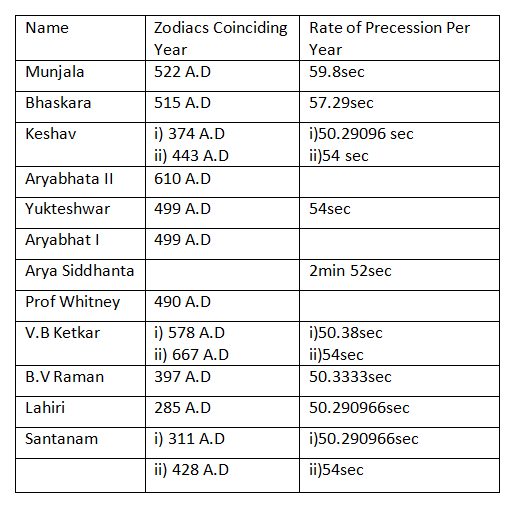 From Table I it is clear that the Zero Ayanamsa year ranges from 490 A.D. to 667 A.D. with the rate of Precession annually ranging between 54″ to 60″. And it is quite evident from the above fact that the date of coincidence changes with change in rate of Precession. Thus the year of coincidence itself becomes an arbitrary factor. However, the modern value as seen from Table I gives 50.290966 seconds per year and the coincidence of Zodiacs from 285 A.D. to 490 A.D.

Some Pertinent Questions
A few questions arise in this context.
(i) All Siddhantic works more or less are similar in determining the time of the coincidence of Zodiacs as well as the rate of Precession. Did they all make false assumptions?

(ii) What is the basis of the modern astrologer to determine the particular year of coincidence of the Zodiac and the rate of Precession per year?

It is also clear from the foregoing discussion that the time of coincidence of both the Zodiacs as well as the annual rate of precession depends upon the value taken. If the period of the revolution of ecliptic against the background of tie stars be 24000 years or 25920 years, the date of coincidence would differ by many hundred years. Similarity the rate of Precession per year too changes with the application of different periods of revolution. If the number of revolutions is taken for 24000 years the rate of precession comes out to be 54 seconds and 11 of Recession of the Equinox takes place in 66.66years. On the other hand if the number of revolutions are taken for 25920 years, then the rate of recession of the Equinox becomes 1° in 72 years. In this way the annual rate of Precession of the Equinox and date of coincidence become the factors dependent upon the arbitrary choice of the model preferred by the astronomer or astrologer.

However modern astrologers who take 50.2 seconds as the standard rate of annual Precession of the Equinoxes are not aware of the fact that this rate does not match with the motion of the Sun or the distance traveled by the Sun. In other words they have not considered the motion of the Sun in Tropical years and in Sidereal years. Let us see how the length of the year in respect of Tropical years and Sidereal years affects the rate of Precession. And this is the reason which explains why Siddhantic works had taken higher value of Precession.

Another very important point which is worth considering is fixing a particular Nakshatra for the measurement of the Equinoxes. In Surya Siddhanta, Zeta Piscium has been considered to be the star group of Revati Nakshatra and identified as Yogatara. For considering Zeta Piscium as the star group of Revati constellation, two conditions were considered :-

(it The star’s proximity to the ecliptic
(ii) Its brightness so that it can easily be identified.

These two conditions were also applied in the case of Chitta Nakshatra which forms the basis of Lahiri Ayanamsa.

In fact, Revati or Zeta Piscium was not near the ecliptic at the time of its adoption. It was really 30° North of the ecliptic which cannot be said to be near. Secondly, the existence of Zeta Piscium is a matter of controversy. In the case of Chitta or Spica Nakshatra, it was said to be exactly at 180° in Libra in 285 A.D. In fact the value was  less than 180°. It means that it was in Virgo sign than in Libra. But this fact was ignored by Lahiri. In fact the selection of any particular star is also the choice of the astronomer. You can take any  point as a fixed one provided it should be recognized  easily and it should be near the ecliptic.