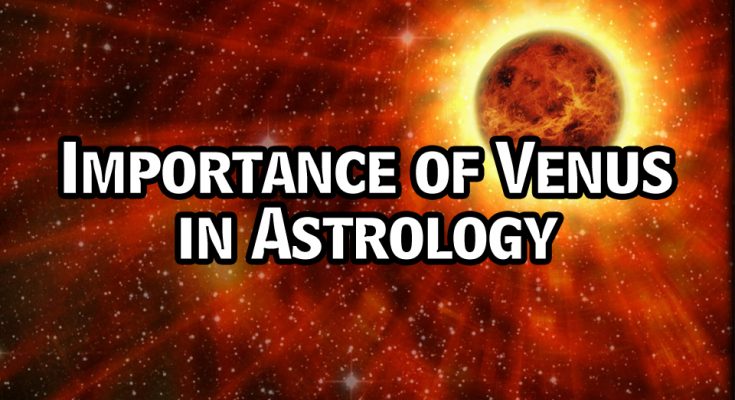 Venus, the teacher of Asuras, is the Son of sage Bhrigu, who is the author of Bhrigu Sutra, and Usha, the dawn. In astrology, Venus rules Taurus and Libra. Taurus is an earth sign and Libra is an air sign. In all ancient texts, Venus comes in different names, but all indicates love, luxuries, comforts, beauty happiness and marriage. According to Uttara Kalamrita written by Mahakavi Kalidasa, Venus means good clothes, marriage, pearls, enjoyment, possessing many women, speaking the truth, semen, dances, genital organs, strong in the afternoon, musical instruments, fine arts.
Venus owns Bharani, Purva Phalguni,  and Purva Ashadha.
In astrology, for both males and females, Venus indicates love and spouse. So, the condition of Venus will show how your love life going to be. It doesn’t mean that a well aspected and placed Venus indicates an “all is well” type of spouse, or if your Venus is badly placed, then your love life is totally waste. First, think that Venus means not the only spouse. Yes, it indicates spouse and love, but it indicates the matters of interest in arts or being in a deal making a process like that.
Venus is debilitated in the sign of Virgo and exalted in the sign of Pisces. This planet in Pisces shows interest for charity, bed pleasures and charity. It is a surprising fact that Venus is exalted in the sign of Pisces, which is the sign of Jupiter, who is the teacher of Devas. In Virgo, Venus doesn’t like to stay for obvious reasons. Venus which deals with sensitive things may not like to be in the sign which deals with diseases, debts and burdens. It is as simple as it is.
Wherever Venus is a present in your chart, you will have an unending passion for those things. According to the dignity of Venus, your passion can be constructive or destructive. Anything too much or too low is not considered as a great thing. For example, when Venus is in the 5th house, it may take you interest out from studies and put you more towards entertainment and fun. In the 9th house, Venus will give immense attraction for higher studies and philosophy. So, Venus in different houses and different signs can behave different ways.
You should interpret a chart in a generic way, like Venus in 8th house is interest for extra affairs, instead, astrology interpretations should be more specific.
Venus surely means what you are attracted towards in this lifetime. The type of attraction you have mattered. A retrograde Venus shows you have to be slow in taking decisions related to love and money. A debilitated Venus means you have to give your extra energy efforts to make your Venusian qualities stronger.  The best remedy for weak Venus is sponsoring a virgin. It can be a child, you can sponsor her for studies or nourishment.
Venus goes in a retrograde mode once in every two years. The retrograde time period is not considered great for making new relationships.

3 Comments on “Importance of Venus in Astrology”