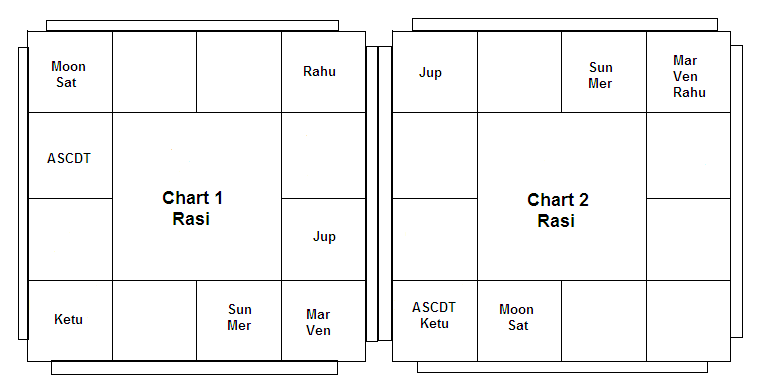 In Chart l, Venus is in Virgo in the 8th from the Ascendant. Not only he is debilitated but is also in conjunction with a malefic and is aspected by another malefic, and is thus much afflicted. The native married in his 36th year when he was having Venus Dasa and within one year he had to separate from his wife almost for good. He lost his job on account of quarrels with his superiors and also his properties in this Dasa finally leading a sickly and lonely life. The situation of Venus in the 7th house is very inauspicious as it makes the native extremely passionate and immoral; if such Venus is powerful the native will have more than one wife. He may also have bad habits like masturbation and sodomy, he may be fond of other woman and enjoy sexual pleasure always. Generally Venus in the 7th in Scorpio or afflicted Venus in the 7th indicates the death of the life-partner.  If Venus is in the 7th in association with the Sun or the Moon, the native may not marry or may marry a widow or a barren woman and in association with Mercury the native may hunt after other women, Venus in conjunction with a malefic in the 7th in a common or Dwiswabhava Rasi like Gemini indicates more than one wife.
In Chart 2, Venus is in the 7th from the Ascendant in Gemini in association with Mars. The native was highly sexed, immoral and wayward and often engaged in nefarious activities. He had more than one wife. According to Varahamihira, if Venus occupies any one of the Vargas of Mars or Saturn and is in the 7th aspected by either one of them, the native becomes adulterous. A conjunction of Mars and Venus in the 7th house ordinarily makes one extremely passionate and adulterous. It indicates sexual connections with other people’s wives. Chart 2 is an example of it.
If the Moon joins Venus and Mars in the 7th in the horoscope of a female, she becomes adulterous with her husband’s connivance. If Saturn is associated with a weak or afflicted Venus in the 7th. the native may have adulterous tendencies or sexual relationship with widows, servile or aged women. If Venus is in the 7th in Cancer, Scorpio or Pisces coinciding with Rikshasandhi (last Navamsa of Cancer, Scorpio or Pisces) and Saturn is in the Ascendant or the 5th house, the native’s wife will be barren. If Venus in the 7th house is influenced by Rahu or Ketu and another malefic, the native will have the least respect for moral codes and is capable of seeking sexual gratification in most nefarious ways. Chart 2 is an example of this. If Venus is in the 6th- the 8th or the 12th from the Ascendant, combined with or aspected by a malefic the partner-in-life will not survive in spite of repeated marriages. 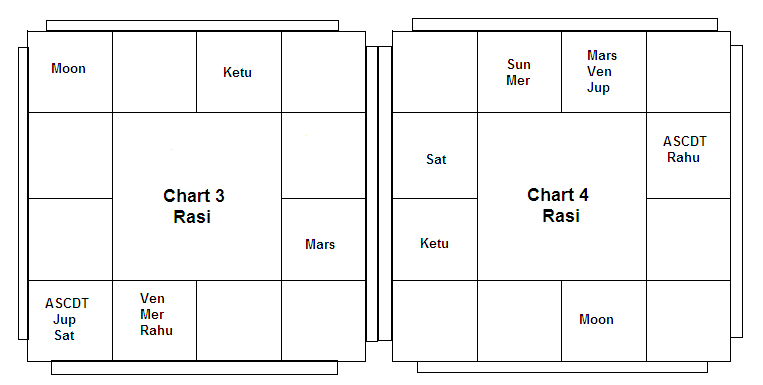 In Chart 3, Venus is in the 12th from the Ascendant with two malefics and is aspected by Mars, another malefic. the native is extremely passionate and licentious and unhappy in love. He married in his 31st year, but his wife died within 6 years; he had his second marriage in his 38th year and his second wife also met with her death in his 47th year. Venus in the 8th house is generally considered auspicious but when weak or afflicted by malefics, denotes death due to rheumatism, tuberculosis or diabetes.
In Chart 4, Venus is in Taurus in the 8th from the Moon and is afflicted. Note the association of Mars with Venus and the situation of Saturn in its 10th house. In the Navamsa also, Venus is in Taurus itself associated with Mars and Ketu, and aspected by the Sun and Rahu. The native was lustful and he married twice. His first wife died and the second wife was sickly. His health was badly affected too much sexual indulgence; he had urinary and bladder troubles besides rheumatic trouble, tuberculosis, and diabetes. He passed away in his 55th year.
Venus in the 9th house makes one fortunate but he will be selfish. If he is in association with Mars, the native will be cruel, insincere and averse to women. Venus in the 10th house is considered good. It may make one a lawyer or judge and popular, social and wealthy but it is not conducive to the growth of one’s family. If the 10th, the 7th, and the 4th are occupied by the Moon, Venus and malefics (in any order), the person may destroy his family. This is called Vamsacheda Yoga. 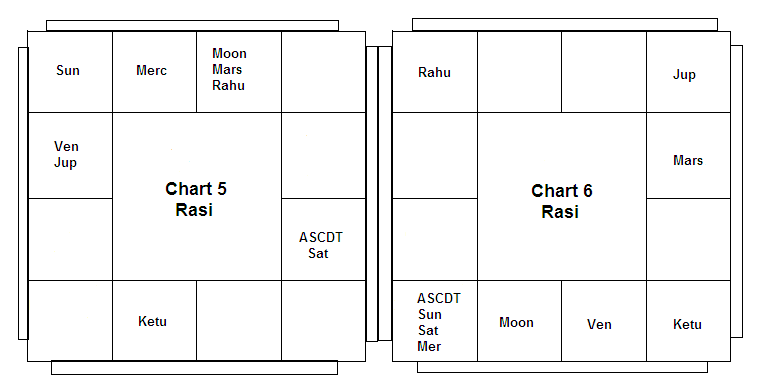 In Chart 5, Venus is in the 10th, Ketu in the 7th and Saturn in the 4th from the Moon. From the Ascendant, the 4th, the 7th, and the 10th are occupied by Ketu, Venus and the Moon respectively. The native was a bar-at-law and a great lawyer and an influential man in his locality but remained a bachelor throughout till his death. Venus in the 12th house makes one licentious and low minded, fond of women, unprincipled and unhappy in respect of two love – affairs. Chart 3 above is an example. Brihat Jataka says: “If Venus occupies the 12th, joining the Navamsa of Saturn, the person becomes the son of menial servant women”.
In the horoscope of a female, if Venus is between malefics or if Venus is associated with or aspected by malefics or if malefics are in the 4th and the 8th from Venus, the native is likely to become a widow early in life.

In Chart 6, both the Ascendant and Venus are aspected by Jupiter and as a result, the native had an early marriage, but she became a widow the very next month. Note the position of Venus between two malefics, the weak Moon and Ketu. Here Venus is also aspected by Mars, hi the horoscope of a male if Venus is between malefics or if Venus is not combined with or not aspected by benefics, the wife will be killed by fire, fall or ropes. It is certain that under the strong influence of natural malefics, Venus loses almost all his luster and good qualities and turns out to be malefic.

Courtesy: Modern Astrology (P Damodaran Nair)
Continued from: The Dark Side of Venus I