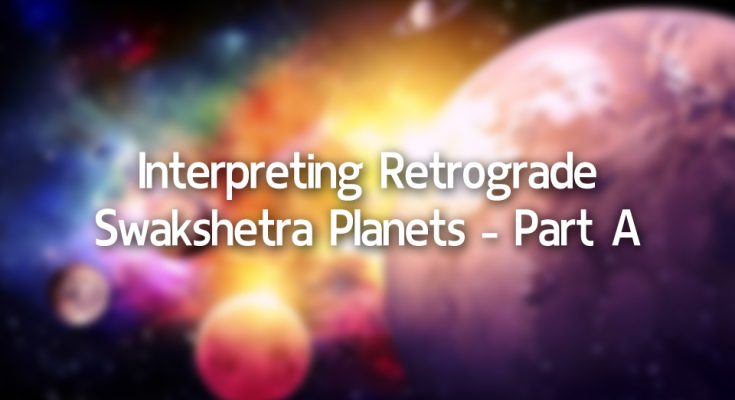 Deeptadhi Avasthas
The efficacy or otherwise of a planet depends greatly not only on its dignities like occupation in own, exaltation, debilitation or Moolatrikona signs but also on other states such as combustion, retrogression, victory or defeat in planetary war etc. These different dispositions of planets are known as Deeptaadhi Avasthas and they are of importance in predictive astrology, especially in the judgment of Dasas. Unless the effects of all these dignities are analysed properly and understood correctly, one is sure to err in one’s prediction. Retrogression of a planet plays an important role in modifying its basic potential either aggravating its adverse results or augmenting its beneficience depending on the related factors in a chart.

Retrogression
Though the planets always move in forward direction only in the sky, they appear to be moving backwards at some specific distances and locations as seen from the surface of the Earth. This is the most important point to be remembered in this context is that the Tara Grahas viz., Mars, Mercury, Jupiter, Venus and Saturn are only affected by this phenomenon. The luminaries Sun and the Moon as also the shadowy Rahu and Ketu do not retrograde.

Basic Principles
The principles of interpretation of retrogression are dealt with in many classical works,but not all of them interpret it the same way. Although there are a few common principles, there is a wide variation in their interpretation so far as the nature of results are concerned. A critical examination of these principles leads to the following basic guidelines on retrograde planets

a)Any retrograde planet, irrespective of whether it is a benefic or malefic, possesses strength equal to that of its exaltation. It gets Chesta Bala of 60 Shastiamsas.
b)The normal results of the planet get modified when in retrogression. A retrograde planet is expected to give abnormal results than what is expected from it when in direct motion. Retrogression may also indicate a reversal in the state of the affairs signified by the planet depending on the conditions prevailing in the chart.
c)Retrogression does not cause any drastic change in either the natural disposition of a planet or in its functional nature which attributes basically remain unaltered.
d)If a malefic is retrograde, it causes more adverse results like evil, grief, purposeless wandering, enmity etc. If a benefic becomes retrograde, it does not lose its auspicious qualities. Instead, it may give less than normal, normal or above normal results depending on the other attendant conditions in the chart.

As regards the actual nature of results produced by retrograde benefics and malefics, Llewellyn George, a pioneer in western astrology, says in his book A to Z Horoscope Maker and Delineator thus: “We believe the influence of benefic planets is weakened when they are retrograde. The condition of retrogradation is contrary or inharmonious to the regular direction of actual movement in the Zodiac and is in that respect evil; hence, when malefic planets are retrograde their maleficence is increased. Aspects, whether radical or progressed, that are thrown to a retrograde planet rob the promotor of its efficacy, what it promises falling short in actual results. Should both the planets be retrograde the things indicated by the aspect would be deficient or disappointing, hence retrogradation is considered a debility”. I have applied and checked many charts and found it to be true.

Benefics become less benefic and malefics become more malefic when they are retrograde.
Incidentally, it is pointed out that the contention in Bhavartha Ratnakara (Chap. 14, Sloka.13) that “malefics becoming retrograde cause good results” and in Yavana Jataka (Chap.79, Sloka 51) that “Planets become extremely distressed because of the retrogression” are not acceptable due to both practical experience and as they are at wide variance from what other major classical works say. However, it is to be remembered that the other states of planets such as debilitation, exaltation, planetary war etc., do create additional modifying influences and whether a planet becomes capable of causing extremely bad or most auspicious results depends directly on the actual conditions prevailing in a chart. Hence, the functionally operative roles of retrograde planets need to be examined with extra care and interpreted cautiously after taking into consideration all other states as well.

Retrogression in Own Sign
There are specific references to retrogression in exaltation and debilitation houses in the classics but which are silent about its effects for planets in own signs. When a number of horoscopes were examined based on the principles stated above, it resulted in the discovery of an interesting fact which proved to be very useful in predicting such cases correctly. That is, although a planet occupying its own sign normally gives auspicious results, when in retrogression in own house it only behaves like ‘a wayward master’ of the sign who harms his own house due to his abnormal and unruly behaviour. As such, it is observed that planets in retrogression in own house cause generally adverse results only to the native concerned. A further detailed study in this area revealed the following points which can be used as additional guidelines for interpretation:-

a)Retrogression of a planet in its own sign spoils the main significations of the house(s) owned and occupied by it. Out of the dual lordships, there is more severe affliction to the house occupied by it than the other one.
b)Only the common signification between the planet and the house owned and occupied by the retrograde planet primarily suffers very badly. For example, when Mars occupies Aries or Scorpio as the 4th lord, the native would face hurdles and problems in all his dealings regarding purchase of immovable property .
c)If the planet retrograde in own sign is subjected to additional adverse influences like combustion, affliction by strong malefics, defeat in planetary war etc., it becomes highly inauspicious.
d)If a retrograde planet (irrespective of whether it is a natural benefic or malefic) is occupying its own sign and has also attained the Vaiseshikamsas such as Gopuramsa, Parvatamsa etc., it may reduce the inauspicious results of the planet to some extent depending on the other conditions in the chart; but, the basic adversity remains. . ‘: ‘
e)Although retrogression does not change the basic natural disposition of a planet, its functional roles in respect of the house owned and occupied by it only get affected very severely and cause inauspicious results.

While looking for the results of planets in retrogression in the houses owned by them, a basic fact that it primarily affects the unique signification of the house concerned must be borne in mind. This general clue may be used judiciously by examining all other attendant conditions in a chart. For example, if the Ascendant lord is retrograde in the Ascendant, it creates negative tendencies in the native in general. If the 2nd lord is retrograde in the 2nd house, it may cause not only bad and unclean dietary habits including addictions to drinking, drugs etc but also undesirable mannerisms in speech etc. If the 3rd lord is retrograde in the 3rd house, the native’s effort would be oriented
towards a wrong direction. If the 4th lord is retrograde in the 4th house, it makes the native generally unhappy despite having all comforts. The results of other houses may be understood on similar lines.
Chart 1: Female: Born October 25, 1981 at 10h.05m at 13N, 77 E 35. 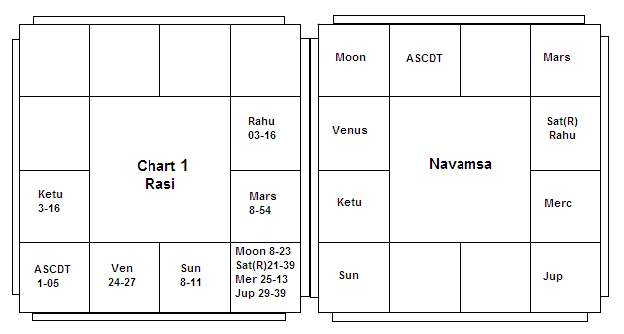 The 7th and 10th lord Mercury is in its own sign in the 10th in retrogression in Chart 1. The Moon (8th lord), Saturn (2nd and 3rd lord) and Jupiter (Ascendant and 4th lord) are conjoined with Mercury in the same sign. Due to the benefic aspect of Jupiter on the 4th house (own house), the native has acquired a law degree and was very keen on practicing in the courts. But, she could hardly get any success in the legal profession for want of clients, as Mercury is also the lord of the 7th house ruling the clients and is not only a Badhaka here but also retrograde in own house in the 10th house ruling profession. The affliction to the 10th house by the 8th lord Moon has worsened the situation and rendered the native jobless and who is literally struggling to earn a regular income.

Despite the fact that a friendly planet Saturn is conjoined with Mercury and Jupiter is in a Kendra from both the Ascendant and the Moon-sign, the main signification of the 10th house, namely, profession, is very badly affected. Not only that, the malefic aspect of Saturn on the 7th house with the 2nd and 8th houses afflicted by Ketu and Rahu respectively, the 7th lord and Badhaka Mercury retrograde in the 10th in own sign and Kalatrakaraka Venus occupying a Dustana in the 12th have adversely affected her married life causing separation from her husband within a few years of marriage. The aspect of retrograde 7th and 10th lord Mercury (as the Badhaka lord) on the 4th house (house of happiness) afflicts the 4th house depriving her of general happiness in life. It may be noted that Mercury does not have Vargabala in the Shadvargas as he is posited in two benefic Vargas only in Rasi and Drekanna. But, in Shodasavargass, he gets 6 benefic Vargas attaining Vaiseshikamsa. In spite of this, the adverse effects of Mercury persist significantly in the life of the native. 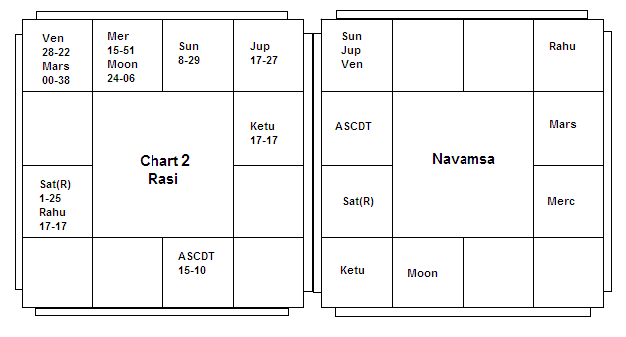 The author was consulted on April 28, 2010 when the native of Chart 2 was in second year engineering and was performing very badly with arrears of subjects from the past three semesters. His parents were worried about the future of his education. The following points were noticed:-
a)The Ascendant is Libra, the 4th lord Saturn (also 5th lord) is in his own house in the 4th house and retrograde.
b)Rahu is also in the 4th and afflicting Saturn.
c)There is no relieving aspect on the 4th house or the 4th lord.
d)The 9th lord Mercury (also Karaka for education) and the 10th lord Moon are in the 7th house (4th to 4th) causing a Raja Yoga.
e)Saturn has Vargabala in Shadvargas geting four benefic Vargas in Rasi Drekanna, Navamsa and Dwadasamsa.
f)Saturn has 9 benefic Vargas in Shodasavargas and has attained Poornachandra Vaiseshikamsa.
The native was in Mars Dasa Mars Bhukti during April 2010.
to be continued…
Courtesy: Modern Astrology(Dr Revathi Vee Kumar)

One Comment on “Interpreting Retrograde Swakshetra Planets- Part A”