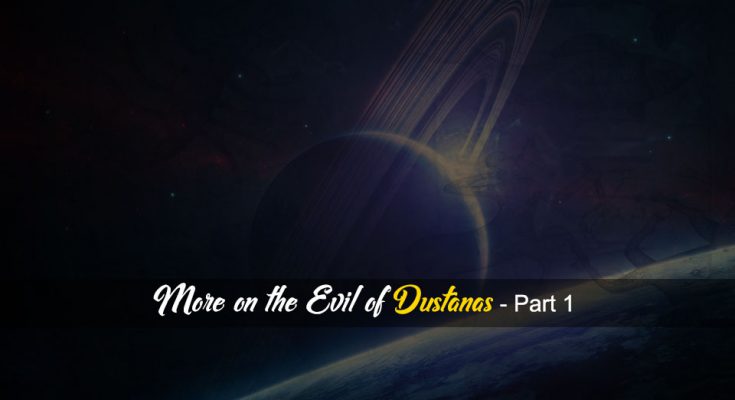 There is no point in minimizing of glossing ever the evil of the 6th, the 8th, and the 12th houses and their lords. Of these, the 8th is the worst. The 6th is next in order of malefic effects and the 12th comes next. The 12th denotes enjoyment and expenditure. If enjoyment is in excess, a person falls ill, losing health (the 6th) and may run into debt(the 6th) if expenses outrun income. While the 6th denotes disease and debts, the 8th connotes death and disgrace. Death, as stated by Poet Tennyson “closes all”. Death silences the orator and parliamentarian and the lawyer of forensic eloquence: it stills the music of the veena, the violin and the human voice; it disables and puts an end to the skill of the eminent surgeon. Death, therefore, is dreaded more than even disease, just as disgrace and dismissal are dreaded even more than debts. That is why, the 8th house is deemed the worst of all houses; and the 8th lord is regarded as the most baneful of the hidden houses the 3rd, the 6th, 8th and the 12th. Natural malefics are considered to be good in the 3rd, the 6th and the 11th. But, even they are not commended in the 8th and the 12th unless they own a bad house like the 6th or a Badhakastana. Even when Saturn, say, as a Badhaka for Aries may relegated to the 12th, he is weakened as the lord of the 10th, so that if and when Saturn is in the 6th or the 8th or the 12th, a native faces initial disappointments and frustration in the matter of employment and earnings, despite high education.

The late Sri V. Krishnaswamy Iyer, who rose to be an eloquent and great lawyer, a High Court Judge, and the Governor’s Law Member in the then Executive Council and who founded the Millipore Sanskrit College and Sri Venkataramana Ayurvedic College, was the founder of the Indian Bank also. When and then Arbuthnot Bank failed and crashed ruining many Indian families he had his inital setbacks, thanks to Mars, lord of Aries Ascendant being in the 4th in Neecha(Neechabhanga though) and Saturn, lord of the 10th and 11th, in the 6th. But thanks to excellent and well placed Jupiter, and the dicta that a malefic by nature is good in the 6th and a Badhaka may be in the 6th, the 8th or the 12th, he rose to fortune and fame.

When Saturn is in the 12th for Aries, a native does meet initial failure and disappointment and frustration, even when a powerful aspect by bene fie Jupiter from Cancer redeems him. But, redemption is not the same, and falls far short of reinforcement, so that Jupiter and Saturn in the 9th in Sagittarius cause a much superior Dhannakarmadhipati Raja Yoga, the Badhaka (tormentor) in the 9th becoming a Sadhaka (supporter), so that the 10th lord is powerful in the 9th, with the 9th lord Jupiter in his own house.

Incidentally, the best position for Jupiter, lord of the 9th (and the 12th) for Aries Ascendant is Sagittarius and the 9th. It is superior, even to Jupiter in the 4th in exaltation, even though a natural benefic in a Kendra as lord of a trine or Trikona is excellent. The reasons are two-fold. Kumaraswamiyam, an ancient Tamil work, postulates that a planet should be in a good place, avoiding the 3rd, the 6th, the 8th and the 12th, not only from the Ascendant but also from his own place and from the Moon. When Jupiter is in the 4th from the Ascendant, even in exaltation, he is in the 8th from the 9th and so, the rule in Tamil Avaravartham Manikkum, Kalanganukkam Maraiamal is not complied with. Secondly Jupiter in the 9th in own houses conduces to more male issues, provided he does not attain an even or female Navamsa. But, Jupiter in Cancer, an even sign and the house of the Moon, shows more female issues.

I have known Libra Ascendant natives with lord of the 7th Mars in the 6th and without benefic aspect remaining unmarried till the age of 30 or 32 years, especially when Venus, lord of the Ascendant, and Mars, lord of the 7th, are in Shashtashtaka, even though Venus, lord of the Ascendant, and love is in the 11th. I have also found Scorpio Ascendant natives with Venus in the 8th as lord of the 7th being married rather late, after experiencing a lot of disappointment in the marriage-market, even though lord of the 12th in the 8th may be praised by the texts. For Scorpio Ascendant, Venus, lord of the 7th and the 12th, is classed as a malefic as the 7th is a Marakastana and the 12th is a Dustana or Trika house. So, he should not join and mar Yogakarakas Sun and the Moon or Jupiter, the unsullied lord of the 2nd and the 5th. But, Venus exalted in the 5th has been found to give a good looking and loving spouse, and ample or abundant Bhoga Bhagya or enjoyment provided Venus is not tainted by Sanim or Rahu or Ketu, or even by Mars, who, though lord of the Ascendant, is also the lord of the 6th (Moolatrikona – Aries). For, there is a Sloka in Phaladeepika, which says that if the lord of the 12th is strong, in a Kendra or Trikona, and exalted or in Swakshetra (own sign) especially if he is a natural benefic, the native spends liberally on good people (and good causes), performs auspicious Karma or acts, to wipe out sins and is also honoured by the king.

For Taurus Ascendant, if Saturn is in the 12th in Aries . the horoscope is no good when the key planet is in the 12th and in debility. Even if there is Neechabhanga, without benefic aspect Saturn very substantially reduces the pattern of the horoscope, so that it may be futile to wax eloquent about other planets, except, perhaps, the Sun and Mercury together in a good house as the lords of the 4th and the 5th respectively. Similarly, Mars, lord of the 4th and die 9th. in the 12 th and in debility in Cancer, reduces radically the pattern of a Leo Ascendant chart. Other planets may not help much, though the Sun and Mercury together, in a good house, as the lords of  Ascendant and of the 2nd and the 11th will give some decent prosperity. The native with Mars in the 12th in Cancer for Leo Ascendant may sell away his lands and even his house, and may not be dutiful to his mother and his father. He will indulge in pompous and waste expenditure and fritter away his resources .Saturn in the 12th in debility will be equally had fling wasteful expenditure and frictions and quarrels in the family. For, a person with Saturn in the 8th or the 12th will have little domestic peace and much wasteful expenditure and members of his family circle will be inimical towards him.

One Comment on “More on the Evil of Dustanas – Part 1”