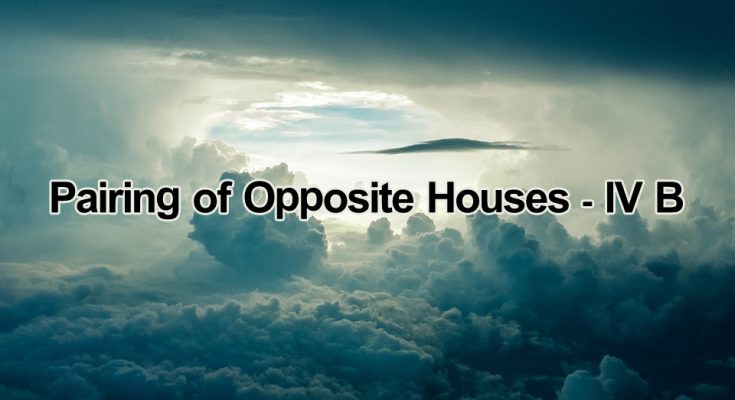 The Tattwas of opposite houses are not same. But, they are friendly in nature. That means, in principle, as a pair the opposite houses mutually support each other unless influenced otherwise. The actual effects depend on the influences on these houses. If a mutually benefic relationship is established between the opposite houses, then they work in unison and in the absence of it, they tend to create discord while a mixture of both benefic and malefic influences would cause results of a corresponding nature in their respective ruling periods. The 3rd and 9th houses are no exceptions to this principle.
For example, it may so happen that the native’s younger co-borns and father together may either support or thwart the native in the realization of his luck depending on the nature of influences on the corresponding houses.
Chart 1: Male: Born January 13, 1985 at 5h. 50m. at 13 N, 77 E 35.

Jupiter, the lord of the Ascendant and the 4th house (house of education, possessions, happiness, etc) is debilitated in Chart 1. Mars (5th and 12th lord) and Venus (6th and 11th lord) are conjoined in the 3rd house and aspect the 9th house. The 2nd and 3rd lord Saturn also aspects the 9th house from the 12th. The 9th lord Sun is well-placed in the Ascendant in a friendly sign.
Here, both the 3rd and 9th houses are influenced by a combination of planets who are inimical to each other as also functional malefics without any relieving aspects. The simultaneous aspect of Mars and Saturn on the 9th afflicts it badly and the aspect of natural benefic Venus does not help because of his lordship as it creates an expectation of comfort, luxury and enjoyment in life which are not supported by the influence of both Mars and Saturn as well as the debilitation of Jupiter. As a result, the native tends to become unhappy with whatever offer he gets.
Mercury (7th and 10th lord) causes Budha Aditya Yoga along with 9th lord Sun in the Ascendant bestowing the native with intelligence and sharpness of mind. But, Mercury as Badhaka and ruling the 10th house creates adverse results by goading the native to expect too much in his profession. As a result, the native after completion of his education rejected whatever small offers he got as he hoped for a better one. But, he was not lucky enough as the 8th lord Moon is in the 10th and Mars aspects it from the 3rd house. Thus, in this horoscope, the native’s effort and luck do not synchronize and hence, as Providence would have it, he would continue to be unhappy and dissatisfied in a few important areas of his life like education and profession.
Chart 2: Rahul Dravid: Born November 1,1973 at 10h.58m at 22 N 43, 75 E 51 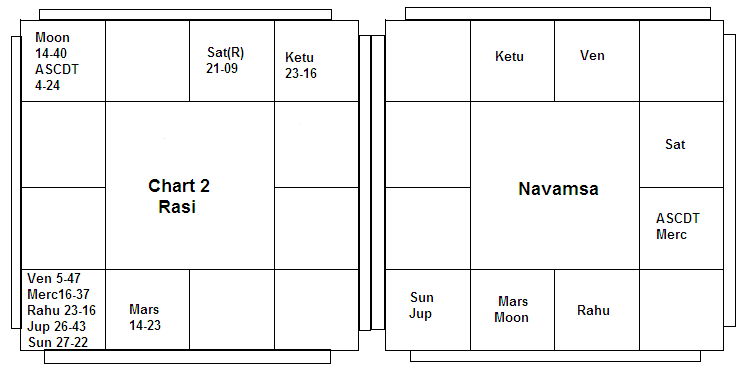 The Ascendant in Chart 2 is Pisces of a cricket player. Retrograde Saturn (lord of the 11th and 12th houses) is in the 3rd in a friendly sign. Mars (2nd cum 9th lord), is in the 9th in his own house. There is a mutual aspect between Saturn and Mars. Both these planets are not influenced by any other planet by way of conjunction or aspect. The 5th lord Moon is in the Ascendant in a friendly sign.
Although Mars is a natural malefic, he works as a benefic not only as the lord of the 9th house, the highest Trikona, (2nd lordship is neutral) but also as he is a friend of the Ascendant lord Jupiter. The occupation of the 9th lord in own house and 5th lord in the Ascendant in a friendly sign ensures that the native’s luck, as well as Poorva Punya, support him in this life. Saturn, the planet in 3rd house, signifying effort (shrama), sweat and toil connected with the 3rd and 11th houses signifying shoulders, has facilitated the native in acquiring excellent skills of using his arms effectively as a result of which his batting technique was considered to be very sound and strong and it has been amply demonstrated by him in many matches under very critical circumstances for which he was considered as a ‘wall’ against any bowler. As such, in this case, it can be seen that the native’s luck has supported his efforts. But, the rate of success when compared to his talent is relatively less due to the occupation of natural malefics in the 3-9 axis, especially Mars and Saturn, as their mutual aspects have reduced his luck partially.
Thus, by examining the 3rd and 9th houses as a pair, the nature of the interlink between effort and luck in a nativity can be clearly identified.
Courtesy: MODERN ASTROLOGY (Dr. Revathi Vee Kumar )
Continued from: Pairing of Opposite Houses – IV A

One Comment on “Pairing Of Opposite Houses IV B”