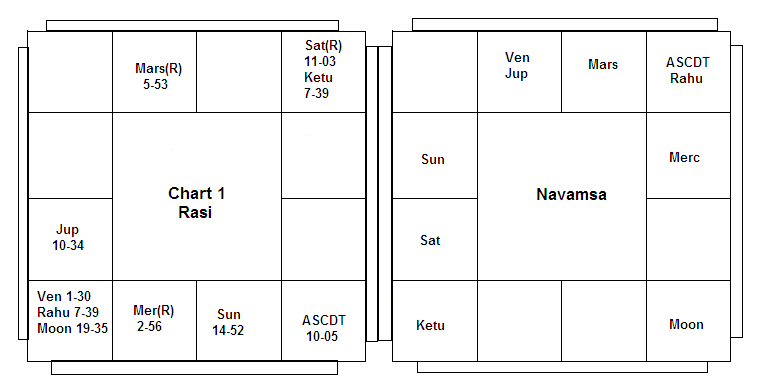 Chart 1 is of a famous actress. The 4th house is occupied by Venus (2nd and 9th lord), the Moon (11th lord) and Rahu. The 4th lord (also the 7th lord) Jupiter is in the 5th house in debilitation. Retrograde Saturn (5th and 6th lord) and Ketu are in the 10th house. The 10th lord (also Ascendant lord) is in the 3rd house and is retrograde. The 8th and 3rd lord Mars who is also retrograde is in the 8th aspecting Mercury.
The occupation of the 10th house by two retrograde malefics afflicts the 10th house severely. The 10th lord is in a Dustana indicating loss of Sukha (12th from 4th) and is aspected by a retrograde malefic Mars who is also the 8th lord. All these adverse influences on the 10th house and its lord are not at all favourable and should have resulted in a totally unhappy professional career. But the conjunction of Venus and Moon in the 4th house creates a benefic interlink between the 2nd, 9th and 11th houses and the combined aspect of these planets on the 10th produces a Yoga in profession. Rahu in Sagittarius is said to give generally good results which helps in mitigating the adverse influences.
Also, Jupiter (4th cum 7th lord) is in the 5th house in debilitation and aspects the 9th and 11th houses creating a link between two Kendras and two Trikonas. Despite being both Badhaka and Maraka with strong Kendradhipati Dosha, Jupiter’s occupation of Neecha Rasi, in a Trikona and in ascending state (Aroha) reduces the adverse effects considerably and supports the 11th house to some extent for fulfillment of her desires, but not fully.
As the planetary influences in the 10th house are not wholly supportive, having chosen a career in films being a celebrity as Miss World 1994, Aishwarya has only a few good films to her credit. Her acting career is not  distinguished and the level of professional success is relatively less when compared with many other actresses
in Indian cinema. The influences from 4th house on the 10th house are more responsible for whatever success she has been able to get.
Chart 2: Ram Jethmalani: Born September 14, 1923 at 16h. 12m. at 25 N 23, 68 E 21. 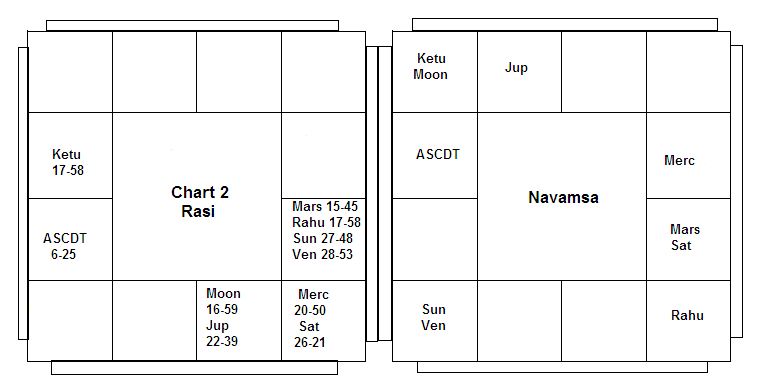 Continued from: Pairing Of Opposite Houses – IVB

One Comment on “Pairing of Opposite Houses – Part V”