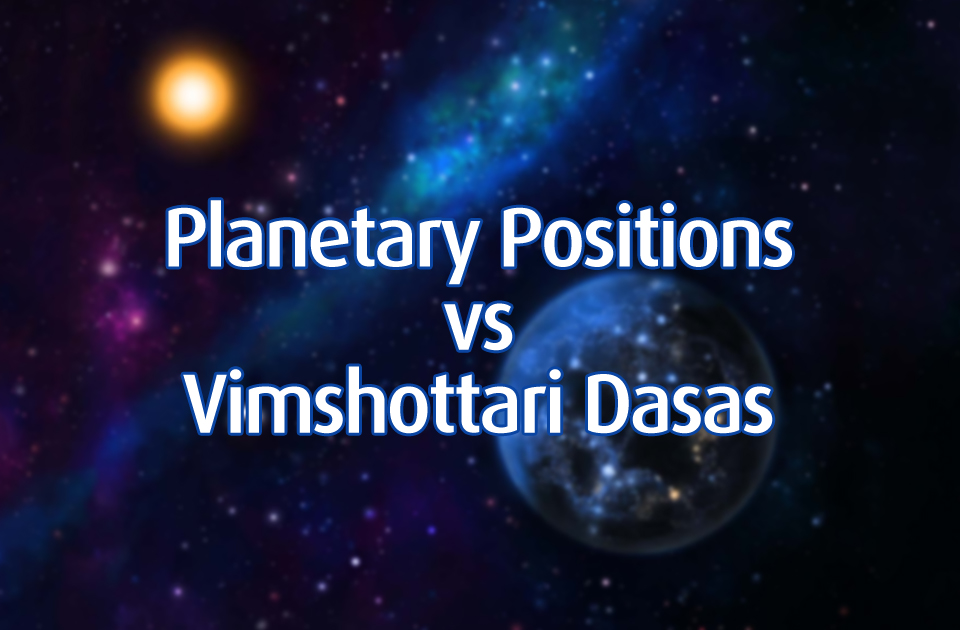 More telling factors than Dasas
There seems to be a tendency out and about, to apply the Vimshottari scheme of planetary periods to the timing of events in an over simplistic, mechanical way. Perhaps this tendency is less so amongst those practitioners who were born and raised in families of astrologers where the very family environment was rich with experience and tradition.
Be that as it may, there are more telling factors than just the planetary periods, such as Vimshottari Dasa in explaining events. And the Vimshottari scheme is not absolute even among planetary periods because there are other schemes which, although they are not as efficacious as Vimshottari (according to Parasara), they still count. It has even been observed that sometimes a combination of other schemes of planetary periods have indicated an event although Vimshottari had not done so very clearly.
Multiple Indicators
Surely, though, there is no astrological indicator as strong as the indicators within the chart itself. That is to say, the timing of events is indicated with the greatest authority judging from house position, sign,position, lordship and Karakattwa.
I remember earlier on when I was very new to astrology, I looked at the chart of a friend whose daughter wanted to marry someone, and my friend wanted to know if she would. She was a bit young, but she was passing through the Vimshottari Bhukti of Venus in the 7th. and it seemed well-placed, so I thought that she would. But I hadn’t factored in on Saturn’s aspect on the house and its lord . Well! she  didn’t end up getting married until quite a bit later on. Saturn is the planet of time and delay, so its placement and aspect are also a factor in timing.
Planetary Ages
And that the planets have ages is another important factor, too. This is defined in the classic literature. For example, the Sun is 50 years old, relatively speaking. In my chart, the Sun sits in the ascendant in Cancer, a sign which relates to beaches, ocean fronts and crabs. I live about 40 miles from a port town which doubles up as a nice beach town where we had an apartment, a block from the beach. Just after I turned 50,1 fancied going there and spend a year of my life in the apartment, where I was exposed to the sandy beach, the Sun, the ocean and crabs. When an individual reaches the age of a planet, the indications of that planet tend to manifest in his or her life.
Also, there are events which occur at certain times during one’s life according to the timing of the planets in their houses, signs, lordships and Karakattwa and these events can take place without there being a corresponding Dasa or planetary period to frankly indicate it. When such events come to the attention of an astrologer, they can communicate that a certain planet’s Karma is becoming activated and suggest that other indications of that planet will be manifesting soon. As such, they can be called indicator events.
Paul McCartney’s Venus Dasa
For example, the horoscope of the Beatle Paul McCartney (Chart I) is puzzling with regard to the moment of Paul’s transition from a humble status to a life of fame, great success and wealth. His Venus Dasa began on the last day of 1956 and continued until 1976. It encompassed all of Paul’s positive Beatle Karma and his success with his later band, Wings. The question is – why did it take 6 years or so from 1957 until the end of 1963 and the beginning of 1964 – for this great transition to take place? 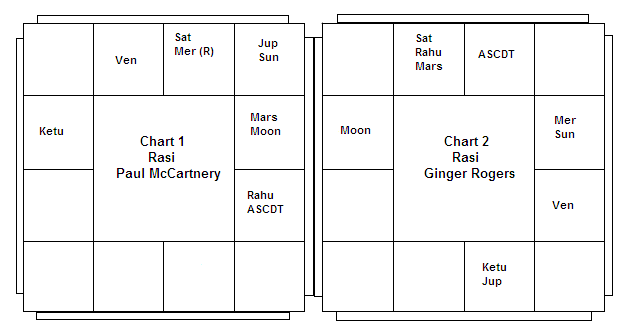