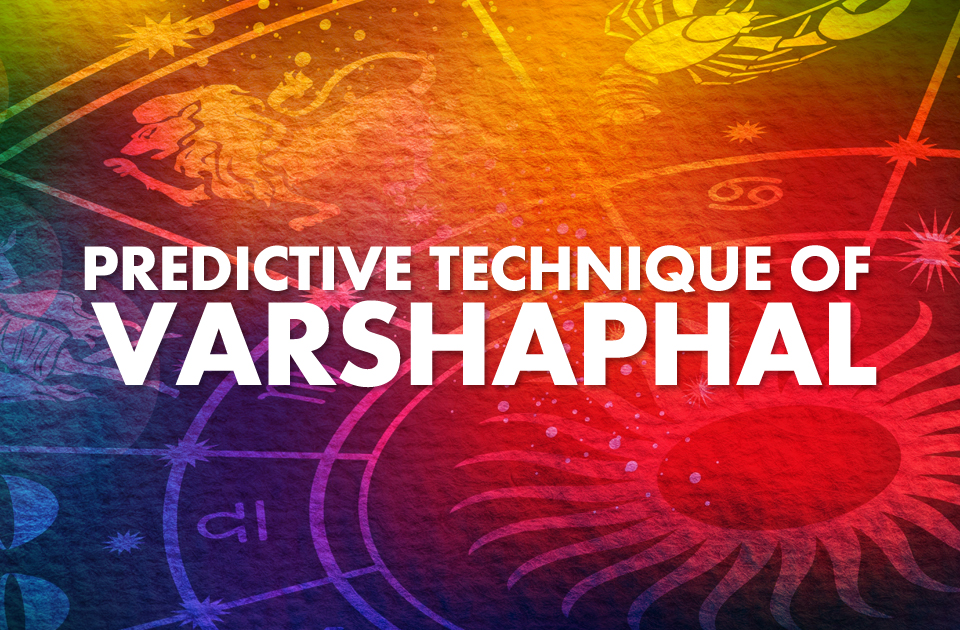 Timing Marriage
This article explores the relationship between the natal chart and the appropriate annual chart with specific reference to Vivaha (marriage) and Punya (auspicious) Sahams on the question of timing marriage.The Varshapala or annual chart is based on the time of the Sun’s return to the same point as that occupied by him at the time of birth. The yearly predictions can be based on this chart. Muntha is the point of intersection between the birth chart and the Annual chart. It moves one sign a year. Hence, it is called Progressed Ascendant. Specific results based on its position can be forecast for the year in question.

The Varsheswara or lord of the year is selected out of the following five:

The Sahams are special mathematical points arrived at by a manipulation of longitudes of the planets in the Varshaphala.

The Sahams are analysed in the context of the following factors

(a) Punya Saham (Fortune and Auspiciousness) : If Varsha Pravesha or the year starts during day,

Punya Saham provides a protective shield to the native during the year. It promotes happiness, auspicious ceremonies and gain of wealth, if the Saham and its lords are strong as per Panchavargeeya Bala. If weak, it yields bad results.

(b) Marriage Saham (Vivaha Saham): Vivaha Saham = Venus-Saturn+Ascendant (for both day and

night Varsha Pravesha). This Saham throws light on the prospects of marriage in the annual chart for the year in question.

(i) Punya Saham: This Saham or its lord in general should be disposed in an auspicious way. It should establish a relationship (position, aspect, conjunction, Yoga) with the Ascendant or Ascendant lord or 7th house or 7th lord either from the Ascendant or Chandra Lagna (Moon-sign) of the annual chart either singly or severally.

(ii) Vivaha Saham: Either Vivaha Saham or its lord should establish a relationship (position, aspect, conjunction, Yoga) with the 7th house or 7th lord either from the Ascendant or Chandra  Lagna (Moon-sign) of the yearly chart singly or severally.

Mudda Dasa • The Vimshottari Dasa system extended to annual charts is known as Mudda Dasa. It is also Nakshatra-based but limited to one year.

Muntha • It is located in the Ascendant at the time of birth and progresses by one sign each year and is known as Progressed Ascendant. The Rasi lord where the Muntha is posited is called Muntha lord.

Dina-Ratri Pati • This is the lord of the Sun-sign where Varsha Pravesha (commencement of the year) occurs during day time (Dina pati) and the lord of Moon-sign in the case of Varsha pravesha occuring during night time (Ratri rpati).

Tri-Rasi Pati • The lord of the Tri-rasi pati varies from sin and depends upon Varsha Pravesha occurring during daytime or nighttime. A standard table of various lords for different signs is given in all Tajika texts or books on Varshaphal.

These principles have been found to work in more than 90% of the charts in a specific research study done by the scribe. 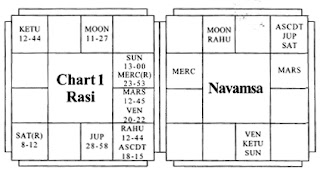 This is the case of a marriage taking place in November 1985 which can be examined on the parameters outlined above. 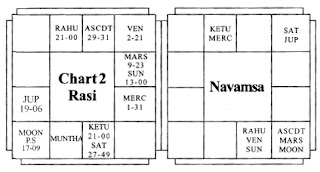 (b) Chandra Lagna (Moon-sign): The Moon is in Taurus where he is exalted and in Rohini Nakshatra. The 7th house from here is Scorpio whose lord Mars aspects his own sign and is with Kalatrakaraka or natural significator of marriage Venus, a benefic disposition. Saturn is the Yogakaraka from Chandra Lagna.

(c) Surya Lagna (Sun-sign): The Sun is in Cancer whose lord Moon is a great friend of the Sun who is in Pushya Nakshatra. The 7th house here is Capricorn whose lord Saturn aspects his own house from a retrograde state.

(d) Navamsa Ascendant: Gemini rises in the Ascendant with its lord Mercury in the 9th house. The 7th house is Sagittarius aspected by Jupiter and Saturn(R). The natural Kalatrakaraka Venus is aspected by 7th lord Jupiter.

The following qualify for giving the marriage considering all the three Ascendants, namely, .

i) Jupiter and Mercury;
ii) Mars and Venus;
iii) Saturn and Rahu

(a) Dasa Lord: Rahu is in the Ascendant aspecting the 7th house Pisces. Rahu is a benefic being in his own sign (Virgo). His dispositor Mercury is in the 11th, the house of gains.

(b) Bhukti Lord: Mercury is the Ascendant and 10th lord (Yogakaraka) in the 11th house of gains, favours, physical comforts and financial gains and can show martrimony.

(c) Antara Lord: Saturn has already qualified from the Sun-sign for clinching the marriage.

3.Transits
(a) Saturn transits Scorpio in 1985 in the 7th from natal Moon and aspects transit Jupiter, the 7th lord from the Ascendant.

(b) Jupiter: During 1985, Jupiter is in Capricorn, aspecting Chandra Lagna and the Ascendant.

The Mudda Dasa operating is of Jupiter and Venus both of whom are qualified for bringing about marriage. The year lord Mercury who is the 2nd and 5th lord also aspects 7th where Muntha is posited. He is auspicious and ensures free flow of the results promised in the natal chartas both the Ascendant lord and the year lord in the annual chart.

Since a is less than b add 12 signs to a and determine the Saham.

Punaya Saham is in Sagittarius whose lord Jupiter is in the 9th. It is a very auspicious position in chart.

Vivaha Saaham is in the 9th along with Punya Saham lord. Its lord Saturn aspects this Saham, and forms a strong Ithasala Yoga with Mars, the 7th lord. The Vivaha Saham is disposed in an auspicious manner during the year.Since the indications for marriage are shown by all the planetary factors, it occurred in November 1985. •