Maharishi Parasara describes the basic effects of Nodes in the 34th chapter, sloka 16, of Brihat Parasara Hora Sastra. There the Rishi states that Rahu and Ketu predominantly reflects effects as due to their conjunction with a sign lord as due to the house or sign they occupy.
This is because they are Chaya grahas or shadowy planets. By definitions, a shadow reflects the reality of another, although it is not perfect duplication. And a shadow still has its own existence, even though it mimics another. This reflective nature of the Nodes, besides being outlines by Parasara is corroborated in the puranic histories. As the narration goes on the demigods retired to the assembly hall of Indra to partake of the nectar of immortality. This was done after churning the Mandara mountain wherefrom the nectar came. At that time, the Daitya Rahu disguised himself as one of the demigods and had a sip of nectar. He was discovered by Sun and the Moon who reported this to Vishnu. And Vishnu severed Rahu’s head by which act the axis was born.
What we are interested in is the fact that being in the assembly hall of the Gods, Rahu became like one of them. In other words, he reflected his surroundings. In predictive astrology also, Rahu reflects the influence of his sign lord, his planetary association and any aspects that he may receive.
But Rahu also has his own results to pass on independent of his above-cited verse of Parasara because the Rishi simply states that Rahu has a “predominantly” or mostly reflective nature. The Rishi does not state that Rahu is an absolute chameleon or an absolutely transparent medium.
The conundrum has to do with how much of which. In other words, various causative factors complicate interpretation. The question becomes, which is the most causative?
Chart 1:Born August 4,1956 at 6h.31m.DST in Washington, D.C(38 N 54, 77 W 01)

Chart I illustrates the very irnportant point that Rahu will reflect the results of his sign-lord in preference to the results of planetary associations or aspects. As soon as the Saturn Dasa began, the native’s education was interrupted prematurely.This only makes sense because Saturn as a planet of darkness and as a bad lord aspects theVidyakaraka and Gnanakaraka, Jupiter and Mercury respectively.
However, in Mars Bhukti of Saturn Dasa, the native went back to school as a full-time college student. This is understandable because Yogakaraka Mars aspects the lord of the 4th and the 4th itself, the 4th being the house of formal education. What is even more interesting is the fact that the native spent the entire Rahu Bhukti in a business school with elite accreditation while maintaining a very nice grade point average.
Rahu associates with Saturn, and where he to simply mimic Saturn’s results, he would have stopped education as Saturn did in his Dasa and Bhukti. But instead of reflecting the results of Saturn, Rahu flat out and out reflected the results of his sign lord Mars. The two results are contradictory, and the fact that a nice level of educational achievements was maintained proves that Rahu favored the results of his sign-lord over the results of the planet with which he was associated. The reader may note that these results were reflected by Rahu even during Saturn Dasa, Saturn being poison for education in this case.
Chart 1 also shows that Rahu will give his own results even if they are contradictory to those of his sign-lord. Rahu brought about divorce and separation from this man’s son. Debilitated Rahu in the 5th indicated this.While Mars as the 5th lord in the 9th does not. This shows that Rahu maintained his own results to give in terms of his house position.
Chart2: Born July 10, 1951 at 15 h .54 m.(DST) at Vancouver, Canada(49 N 15, 123 W 08) 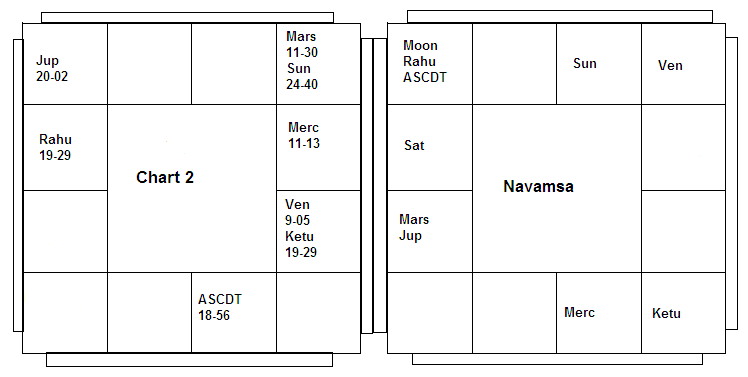 Chart 2 shows that Rahu will reflect the indications of his sign-lord in preference to those of any aspects he receives. Throughout Rahu Dasa the native lived as a celibate monk. He abstained from association of women and truly exhibited a renunciative spirit. This is because Saturn associates with the moon in a pious sign in the house of renunciation. Rahu reflected this combination as he is placed in Aquarius, a Saturnine sign.
Had Rahu given preference to the aspect of Venus occupies the best Upachaya and the sign – lord of Venus occupies Gemini, a sign representing sexual union. The fact that Rahu reflected renunciation proves that his sign -lord was more influential than the aspect he received.
It cannot be argued that the chart suggests renunciation so overwhelmly that Venus by himself could not overturn this indication I say this because as soon as the native entered Jupiter Dasa he fell away from his vows and married. (Jupiter in Swakshetra in the 7th from the Moon brought this about). So his celibacy during the Rahu period was truly a tribute to Rahu’s reflection of his sign – lord’s results
over and above the influence of the Venusian  aspect  than anything else.
Chart 3: Born July 7, 1940 at 00h. 05 m. DST at Liverpool, UK (53 N 25, 3 W 00). 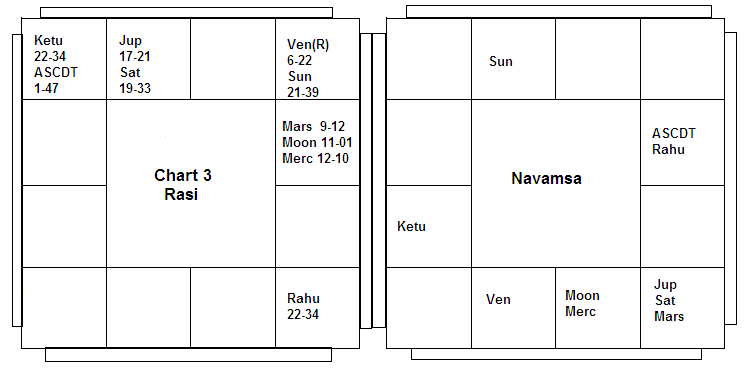 The horoscope of Ringo Starr (Chart 3) shows us that the Nodes have their own results to give in terms of sign and Nakshatra placement. Ringo had experienced a relatively obscure life until world-wide wealth and fame as the drummer of the Beatles were thrust upon him when the planetary period of Ketu began. It is true that Ringo’s sign-lord Jupiter sits in the 2nd house nicely enough, but there is no suggestion of Ringo,s exalted status in the world. Were it merely for the Ascendant lord, the other combinations in the chart would not have manifested on a high level.
What gave strength. however, is that Ketu himself sits in a sign which is akin to being in his own sign (Swakshetra) in the Ascendant, the foundation of the horoscope. This was not a matter of any reflection or mimicry of results. Rather, it was Ketu’s own influence that was responsible for such results.
Also notable was the fact that Ketu was so reflective of his Nakshatra perhaps more in terms of quality. Ketu sits in Revati whose symbol is specifically a drum for beating time.Need we see more? Consider the following comments on the specific nature of Ringo’s style of drumming:
Paul McCartney: “Ringo is right down the center, never overplays.” from an interwiew in Musician Magazine (Feb. 1988)
D. J. Fontana: “l was playing maracas or something behind him, just listening to him. I swear he never varied the tempo. He played that back beat and never got off it. Man, you couldn’t have moved him with a crane. It was amazing. He played a hell of a back beat man, and that’s where it’s at.” Interview  for The Big Beat by Max Weinberg)
What we have seen demonstrated in Chart l is that Rahu reflected the results of his sign lord in preference to the results of fellow planets in the same house and sign, in Chart 2 Rahu reflected the results of his sign lord in preference to the results of planets that aspect them, and in Chart 3, Ketu maintained the ability to give his own results in terms of sign and Nakshatra placement.
The task of the astrologer is to properly blend these indications in their proper weight and proportion, and interpret the horoscope.